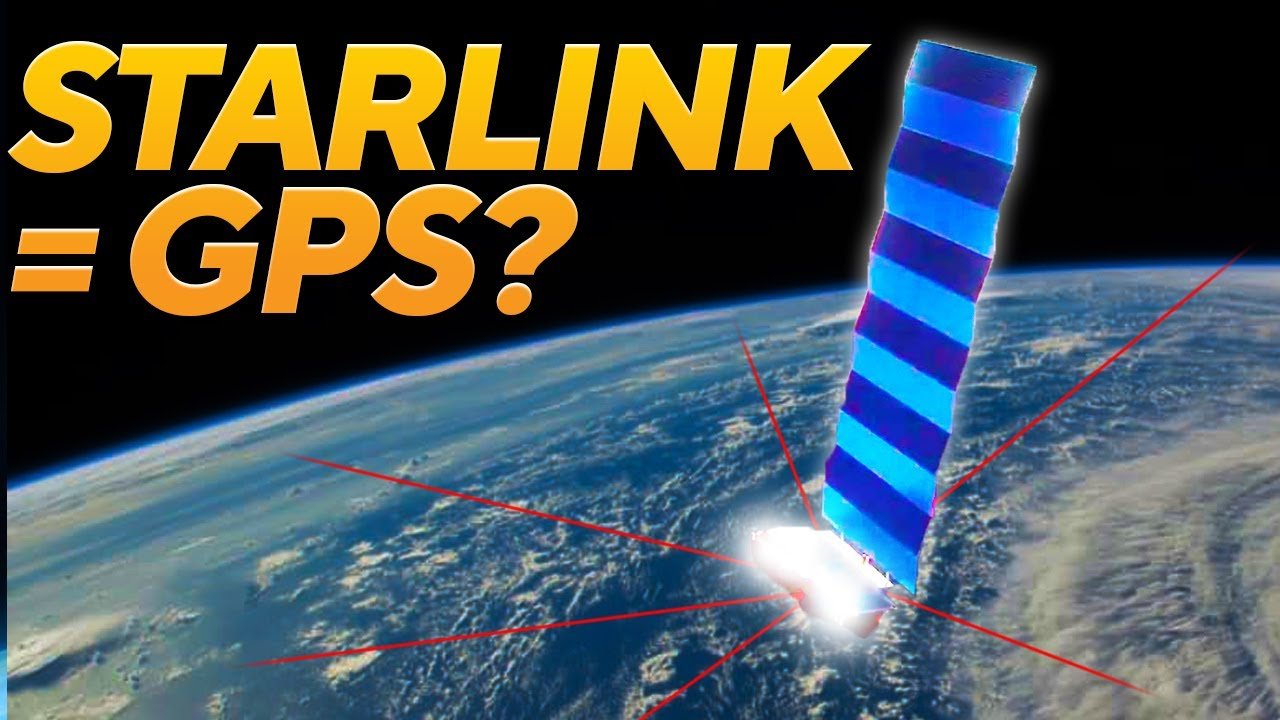 [su_dropcap style=”flat”]N[/su_dropcap]Not Only the Internet but Starlink Can also Now Be Used Like GPS: A recent study finds that Signals from SpaceX Starlink broadband satellites can be used to pinpoint locations on Earth to within 8 meters of accuracy. This works very much like GPS. But unlike the GPS, you won’t even need to be connected to the internet to use it. How? Well, we will find out in just a second.

Starlink’s capabilities are expanding well at a very steady pace. People outside of SpaceX have recently begun building capabilities for it. A group of researchers from Ohio State University (OSU) and the University of California, Irvine (UCI) have devised a method for using Starlinks networked satellites as a basic navigation aid.

[su_dropcap style=”flat”]T[/su_dropcap]The Global Positioning System (GPS) has been in use for decades and is the foundation of everything from autonomous driving systems in cars to running watches. It does, however, have certain flaws. Because the system is so well known, it has been vulnerable to assaults, which have resulted in issues ranging from overriding the flight paths of civilian and military drones to hijacking Tesla’s autopilot feature.

Engineering experts claimed in a new peer-reviewed study that signals from SpaceX Starlink broadband satellites might be utilized to locate places on Earth to within 8 meters of precision.

Their findings are part of a growing corpus of research on utilizing signals from low Earth orbit (LEO) satellites for navigation, much like GPS. This technology isn’t going to replace your smartphone’s map app anytime soon, and this initial trial needed 13 minutes of tracking six Starlink satellites to locate a position on Earth.

However, researchers were able to perform the locational feat without the assistance of SpaceX, and they believe the test demonstrates the approach may be utilized for navigation.

“We eavesdropped on the signal, and then we designed sophisticated algorithms to pinpoint our location, and we showed that it works with great accuracy,” Zak Kassas, the director of CARMEN (Center for Automated Vehicle Research with Multimodal AssurEd Navigation), a US Department of Transportation-funded center at Ohio State University, said in the article.

“And even though Starlink wasn’t designed for navigation purposes, we showed that it was possible to learn parts of the system well enough to use it for navigation.” There are already alternatives to GPS, but Dr. Zak Kassas and his team decided to see if he could use a different technique that was never expressly intended for navigational purposes, SpaceX’ Starlink.

[su_dropcap style=”flat”]C[/su_dropcap]Currently, Starlink has approximately 1,700 satellites orbiting the Earth attempting to provide broadband internet anywhere in the world. SpaceX expects to launch 40,000 satellites to support the network. Each of these satellites is also in a much lower orbit than existing GPS satellites, making them easier to communicate with.

The research was conducted by Kassas along with Joe Khalife, who is a postdoctoral fellow at the University of California, Irvine, and Mohammad Neinavaie, who is a Ph.D. student at UC-Irvine.

Kassas is also a UC-Irvine professor and director of the Autonomous Systems Perception, Intelligence, and Navigation (ASPIN) Laboratory, while Khalife and Neinavaie are members of the lab. Their experiment was conducted using an antenna on the UC Irvine campus.

[su_dropcap style=”flat”]A[/su_dropcap]Allow us to get a little technical in our efforts to explain this further. Starlink’s satellites are all LEO satellites. A low Earth orbit (LEO) is an Earth-centered orbit close to the planet, often specified as an orbital period of 128 minutes or less, making at least 11.25 orbits per day.

Most of the artificial objects in outer space are in LEO, with an altitude never more than about one-third of the radius of the Earth. The researchers’ paper said that “various theoretical and experimental studies” have considered the possibility of using “signals of opportunity” from LEO broadband satellites for navigation.

“With SpaceX having launched more than a thousand space vehicles (SVs) into LEO, a renaissance in LEO-based navigation has started,” they wrote. “Signals from LEO SVs are received with higher power compared to medium Earth orbit (MEO) where GNSS [Global Navigation Satellite System] SVs reside.

[su_dropcap]M[/su_dropcap]Moreover, LEO SVs are more abundant than GNSS SVs to make up for the reduced footprint, and their signals are spatially and spectrally diverse.” Another advantage of LEO satellites is that they do not require additional, costly services or infrastructure from broadband providers.

That, however, doesn’t mean the task for researchers was easy. “However, broadband providers do not usually disclose the transmitted signal structure to protect their intellectual property. As such, one would have to dissect LEO SV signals to draw navigation observables,” they wrote.

According to the researchers’ conference presentation description, broadband providers may modify their protocols to allow navigation. Despite the fact that “more complex receiver designs” are required, the researchers claim that their own third-party solution is more practical.

The researchers previously considered a cognitive approach to tracking the Doppler frequency of unknown LEO SV signals but said in their most recent paper that this method “cannot estimate the carrier phase, nor can it be adopted here since it requires knowledge of the period of the beacon within the transmitted signal, which is unknown in the case of Starlink LEO SVs.

“To overcome that barrier, they developed a carrier phase tracking algorithm for Starlink signals without prior knowledge of their structure. During the experiment, a stationary National Instruments (NI) universal software radio peripheral (USRP) 2945R was equipped with a consumer-grade Ku antenna and low-noise block downconverter (LNB) to receive Starlink signals in the Ku-band.

“The sampling bandwidth was set to 2.5 MHz and the carrier frequency was set to 11.325 GHz, which is one of the Starlink downlink frequencies,” they said. The researchers recorded Starlink signals for 800 seconds or about 13.3 minutes.

“During this period, a total of six Starlink SVs transmitting at 11.325 GHz passed over the receiver, one at a time,” they wrote. Researchers stored samples of the Ku signals “for off-line processing.”

The receiver’s position was estimated using a weighted nonlinear least-squares (WNLS) estimator. The result was 25.9 meters off the real location, but the error dropped to less than 8 meters upon “equipping the receiver with an altimeter to know its altitude.”

Starlink satellites also provide identifying metadata that helps ground controllers to distinguish between transmissions from various satellites. Each satellite also has a unique orbital path that may be utilized to determine its location. Researchers in Dr. Kassas’ group were able to geographically locate an antenna receiver within 7.7 meters of its real location using signal strength, information from the satellites themselves, and estimations of the orbital position of those satellites.

This isn’t quite the same accuracy level as GPS, which can vary between 0.3 and 5 meters of inaccuracy. However, the technique utilized only six Starlink satellites for its positioning, and with the increasing number of satellites in orbit, Dr. Kassas expects that accuracy level to increase dramatically.

Starlink isn’t the only system the researchers have used this technique on. They’ve used other low-Earth orbit satellite systems to locate objects within 23 meters and even land-based transceivers to help locate high-altitude aircraft.

Again, we must stress that the researchers completed all of this work with no aid from SpaceX. They merely deciphered the information from each satellite rather than the communications themselves, which include encrypted internet traffic.

However, it begs the issue of how much more labor would be required to fully decode the communications rather than simply the metadata, thereby jeopardizing Starlink’s network integrity. For now, the OSU / UCI researchers have no intention to find out.

Their work is focused entirely on getting useful navigational data out of a new infrastructure asset that wasn’t designed for it. If their accuracy increases to the expected level, then maybe Starlink, which was never intended as a navigational tool, can eventually fill in for GPS in a pinch. We have just discussed in detail a path with which it may be possible for researchers to build a GPS competitor out of Starlink’s systems.

Many more challenges need to be overcome for this to be viable, most notably that of official support and government objection. Much of the technology utilized in the GPS and that which is still being added to it is owned and controlled by the US government.

They may thus see it as a challenge instead of an opportunity to cooperate. If pitched to Elon Musk, he is more than likely to support this development as he looks to undercut his direct rival Jeff Bezos and his company Blue Origin in any way possible.

A robust GPS owned by SpaceX could be an important boost, a boost SpaceX could very well need. The Federal Communications Commission (FCC) would have a field day sorting the case out for approval if SpaceX ever comes up with an official plan to provide an alternative to GPS.

SpaceX has launched over 1,700 satellites but plans to eventually launch tens of thousands in order to expand the broadband service’s capacity and availability. Those additional satellites would presumably also make it easier to build navigational systems of the type envisioned in the new research. Let us know what you think of SpaceX’s prospects in providing GPS services?

Thanks for reading till the end. Comment what’s your opinion about this information “Not Only Internet but Starlink Can also Now Be Used Like GPS”.