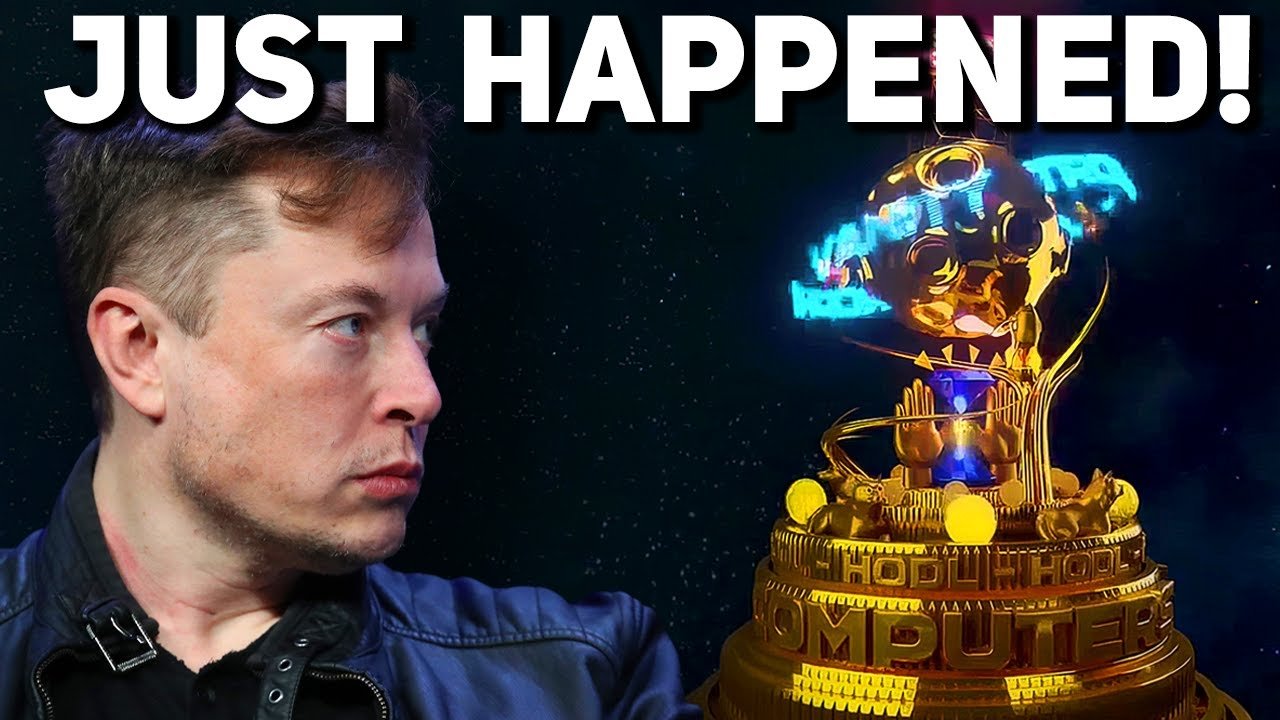 Take A Look Elon Musk JUST REVEALED THIS About NFTs: New ways of getting rich quickly have appeared, or so it seems. Cryptocurrencies and NFTs are among the new technological innovations for wealth that have received considerable attention from the common public, the state, and the wealthy.

Both of these pieces of technology have garnered such a cult following that it’s impossible to browse the net without coming across memes about them. But what does a tech-savvy billionaire like Elon Musk think about them?

‘NFT’ is short for “non-fungible token”. “Non-fungible” basically means it’s one-of-a-kind and can’t be substituted with anything else. A bitcoin, for example, is fungible, meaning you can exchange one for another and get precisely the identical thing.

A one-of-a-kind trade card, on the other hand, cannot be duplicated. You’d get something altogether different if you swapped it for a different card. The ‘token’ part of ‘non fungible token’ is basically a computer-readable signature or code that proves ownership.

These tokens are attached to digital art pieces and traded around. Clicking ‘save as’ does not mean that you own legal rights to that digital art piece, however, so there will be no easy-to-commit art theft crimes. But why are these things sold for about the same prices as a CEO of a top multinational company gets paid?

The answer is a cryptocurrency, specifically Bitcoin. Over 100,000 people are reported to have become millionaires as a result of Bitcoin. It’s no wonder that NFTs exploded in popularity in March. That’s when bitcoin surpassed $60,000, a 500% increase in just six months.

When you see a news article or a tweet about someone spending a ridiculous amount of money on an NFT, it’s easy to be confused about how ridiculous that purchase would be for you. It’s easy to overlook that highly expensive items are almost exclusively purchased by very wealthy people, who spend a lot of money on status symbols.

Take, for example, the Bored Ape Yacht Club. It’s a group of 10,000 ape NFTs, each with unique characteristics that make some rarer than others. Rare varieties have sold for over a million dollars, while ordinary variants sell for roughly $200,000.

BAYC developers marketed the NFTs for $190 each at the time of the introduction in April, enticing investors to purchase them as speculative assets. BAYC, which is owned by celebrities like Steph Curry and Jimmy Fallon, is a “profile image collection.”

The photographs are primarily intended to be used as your display photo on Discord, where the majority of NFT business is conducted, as well as on Twitter, Instagram, and other social media platforms. That’s absurd in isolation.

When viewed in the context of how wealthy people spend their money, though, it is less shocking. Why spend money when you can just right-click and save a JPEG? You can purchase a decent house in a safe neighborhood for $1 million practically anyplace in the world, but celebrities often buy $20 million mansions. Issues With NFTs NFTs are divisive.

A small number of people believe in the underlying technology, while the vast majority believe it is a scam. Similar to how the second group struggles to understand the potential in NFTs, the first group can be overly defensive of the technology’s flaws at times.

There are, without a doubt, several difficulties with NFTs. The first is the perplexing lack of accessibility. There’s a reason why software developers do so well in crypto and NFT trading: they’re good at it. It’s difficult to set up blockchain wallets and other digital devices.

Even simple purchases and sales can be risky. If you send money to the wrong wallet address by mistake, it will be lost forever. Hackers who don’t believe NFTs are “genuine” investments have targeted them in the past. Many exchanges use security procedures that are old or ineffective.

Let’s pretend you’ve got $1,000 to spend. During a public auction, you should expect to spend between $120 and $400 on a new NFT. That is until you consider the transaction fees.

The majority of NFTs are based on the Ethereum blockchain, which is a sophisticated and infamously inefficient system. The greater the costs, the more people who use Ethereum. In a good situation, you’ll spend around $100 per transaction, though it’s not uncommon to spend double or triple that amount.

Suddenly, $1,000 doesn’t seem to stretch very far. And now, the issue with NFTs and anything crypto-related that Elon Musk may take the most issue with, although he has never publicly stated such. The inefficiency of Ethereum contributes to the other significant issue of NFTs: their high energy consumption.

It’s worth noting that this is a conceptual distinction: NFTs aren’t as awful for the environment as Ethereum. Other networks, such as Solana, consume a small percentage of the power. Ethereum developers are scheduled to release an update in the future that will reduce minting and usage energy consumption to 1% of what it is now.

While no one knows exactly how much energy Ethereum consumes right now, we do know it’s a lot[g]. Finally, the majority of people that trade NFTs do so in order to make a profit. Scams are everywhere, and prices are always fluctuating.

The vast majority of people that make, buy, and sell NFTs are either unaware of or uninterested in the technology. If there is a technological breakthrough, it is likely to be overshadowed by the wild price swings.

Elon Musk and NFTs In a Twitter post in 2021, Elon released a techno song with the lyrics: “NFT for your vanity. Computers never sleep. It’s verified. It’s guaranteed.”

On “Valuables,” a platform established by Cent, a social media network built on blockchain, Musk’s tweet, including his commentary, clip, and song, was placed for sale as an NFT.

According to the website, the highest bid was $1.12 million from Sina Estavi, CEO of Bridge Oracle, as of Tuesday morning. “Valuables” needs users to sign in with their Twitter account in order to authenticate that the tweets for sale are those of their real creators.

However, Musk later decided that he wouldn’t sell his tweet after all. “Actually, doesn’t feel quite right selling this,” he tweeted later. “Will pass.”

A curious event for sure but perhaps the final decision to not sell explains his most recent attitudes towards NFTs, at least in part.

On the December of 16th, 2021, he posted a meme mocking NFTs. A therapist is seen to be asking, “these ‘NFTs’, are they in the room with us right now?”

More recently, Twitter Inc. announced the availability of NFT profile images on Thursday. The feature, which is only available to Twitter Blue subscribers on iOS, connects users’ Twitter accounts to crypto wallets where they store their NFT holdings.

NFT profile images are displayed as hexagons on Twitter, which distinguishes them from the conventional circles available to other users. When you tap on the images, information about the art and who owns it appears.

Twitter, like other tech businesses, is scrambling to capitalize on crypto developments like as NFTs, a sort of speculative asset that authenticates digital objects such as photographs, videos, and virtual world land. In the year 2021, the social media platform offered the ability for users to transfer and receive Bitcoin.

Posting a screenshot of Twitter’s new feature, Musk said, “This is annoying” and followed up with criticism of crypto-related spam. “Twitter is spending engineering resources on this bs while crypto scammers are throwing a spambot block party in every thread!?” he wrote.

His criticism of NFTs and other crypto-related tech should not come as a shock if you do not forget to remember that he leads Tesla. Tesla halted Bitcoin vehicle purchases in May 2021, citing concerns about climate change.

“We are concerned about rapidly increasing use of fossil fuels for Bitcoin mining and transactions, especially coal, which has the worst emissions of any fuel,” Musk wrote. “Cryptocurrency is a good idea… but this cannot come at great cost to the environment.”

“Environmental, Social and Corporate Governance (ESG) issues are now a major motivation for many investors. Tesla, being a clean energy-focused company, might want to work better in the environmental area of ESG,” Julia Lee from Burman Invest told the BBC. “But a cynic might suggest that this is just another move by Elon Musk to influence the cryptocurrency market, as he has done on so many other occasions,” she added.

When Elon Musk first stated that Tesla would take Bitcoin as payment, he prompted a boom in the value of Bitcoin and the adulation of its ardent supporters.

After the price dropped due to Musk’s announcement, furious and disappointed fans were accusing their former idol of treason in the chatrooms.

A move that was heralded as a sign that Bitcoin was on its way to becoming popular ended up demonstrating how fickle – and downright flaky – the whole cryptocurrency industry, including NFTs, can be.

Thanks for reading till the end. Comment what’s your opinion about this information “Take A Look Elon Musk JUST REVEALED THIS About NFTs“.