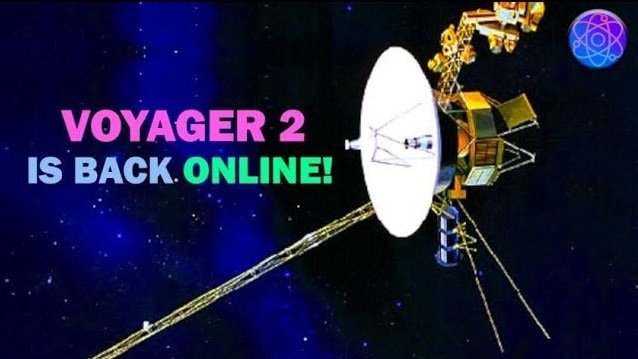 Voyager 2 Is Back Online, 11.6 Billion Miles From Earth: Voyager 2 has been around for a while. This is an explorer who has no pilot to go into the vastness of space collecting data about our universe. The space probe was launched on 20 August 1977 from Cape Canaveral, Florida. And to this day, it’s still sending data back to Earth.

Voyager 2 was specifically designed to study the edge of our solar system. It passed through Jupiter, Saturn, Uranus, and Neptune and analyzed the planets closely.

Voyager 2 is still cruising in space today. As time passes, it flies far away from Earth. It is currently about 11.6 billion miles or 18.66 billion kilometers from our home planet in the depths of interstellar space.

Because of that distance, maintaining contact with Voyager 2 is an enormous effort. Even though radio waves travel at the speed of light, the signal from Voyager 2 will take longer to reach Earth and vice versa.

This makes it very difficult to send and receive signals from space probes. But now, Voyager 2 is back online. In 2020, NASA has successfully approached Voyager 2 after completing an upgrade to an antenna in the Deep Space Network. The DSN consists of huge antennas spread around the world.

The network has antennas in Madrid, Spain; Goldstone, California; and Canberra, Australia. Antennas are positioned so that any spacecraft within line of sight can transmit and receive signals at any time.

Despite the DSN’s wide reach, keeping in touch with Voyager 2 remains a challenge. During a flyby in 1989, along with Triton, one of Neptune’s moons, the space probe was deflected to the south and it has been moving in that direction, so now in the line of sight with the Goldstone and Madrid antennas.

The Canberra antenna, called Deep Space Station 43 or DSS 43, is the only one that can communicate with Voyager 2. DSS 43 was the antenna that went through major repairs and upgrades – as such, it could send commands to Voyager 2 more effectively.

Also, the DSS 43’s transmitters haven’t been replaced in 47 years, so they are really long overdue for upgrades. While the antenna was being repaired, Voyager 2 was still sending scientific data back to Earth, NASA was able to receive them, but without DSS 43.

They could not send instructions to Voyager 2, but now with an upgraded DSS 43, Earth can be in contact with Voyager 2 again. But because of the vast distance between the space probe and Earth, it takes 17 hours for messages to be relayed.

That’s 34 hours round trip for the radio signal, which is about a day and a half. The 44-year-old space probe is currently in an area called interstellar space. Roughly this means that it is between the Sun and other stars in our galaxy.

More specifically, the space probe has moved beyond the heliosphere which is the bubble of plasma produced by the solar winds. The heliosphere protects the solar system from radiation and other stars in interstellar space.

There are many cosmic rays scattered by the explosion of stars, which generate tremendous amounts of radiation. The heliosphere blocks those rays from entering our solar system.

The heliosphere extends slightly beyond the Solar System. So in short, Voyager 2 has already exited our solar system, it is entering the unknown. What’s in Interstellar Space? It may sound empty, but it is far from nothing.

Most of the Interstellar Space is made up of hydrogen and helium, two of the most abundant elements in the universe. Along with these are clouds of gas and dust composed of different elements.

Voyager 2 is an old piece of equipment but it has made history a few times. Here are some of its grand achievements:

Voyager 2 draws power from something called a radioisotope thermoelectric generator, or RTG.

It is a bit like a nuclear power plant, but much smaller and an RTG uses heat from radioactive decay to generate electricity, much like how a nuclear reactor uses heat from nuclear fission to produce electricity. The RTG powers eleven scientific instruments and radio transceivers.

The radioactive material in an RTG decays over time, so it will not provide power forever. Each year, Voyager 2’s power output drops by 4 watts, and over the years, NASA engineers have had to turn off the instruments one by one to save energy.

Currently, only 5 of the 11 scientific instruments onboard are active. Most of them are instruments that measure energy. The cameras have been turned off, though it would have been nice to see what interstellar space looked like.

NASA engineers will also have to weigh options in interstellar space. There’s almost nothing to see nearby, so it’s best to have the cameras offline. That way, Voyager 2 can squeeze more power out of its RTGs for instruments that are more useful in that area of ​​space.

In its current state, Voyager 2 will only have enough power to last until 2024, according to Voyager program chief scientist Ed Stone. That means there are three years left to stay online and continue transmitting data.

Still, it’s amazing how Voyager 2 survived for so long. It has been operating for more than 47 years, which is about two-thirds of what NASA has been in existence.

When the time finally comes for our Voyager 2, it will continue to flow into interstellar space, but it is not known what will happen to it.

As you read this article, it continues to flow through interstellar space at about 39,000 mph. Even after the juice is over, it will continue to enter the unknown.

Thanks for reading till the end. Comment what’s your opinion about this information “Voyager 2 Is Back Online, 11.6 Billion Miles From Earth”.

1 thought on “Voyager 2 Is Back Online, 11.6 Billion Miles From Earth”