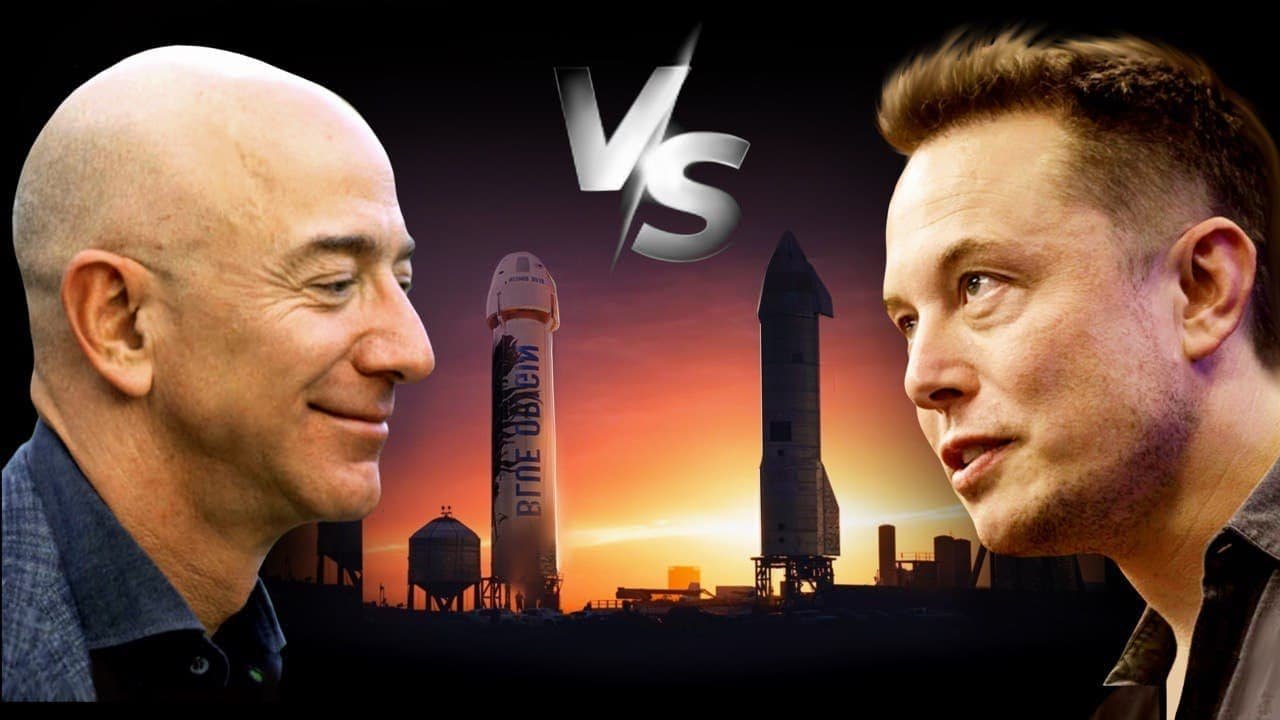 This Is Why Jeff Bezos Hates Elon Musk: It is a space race and not only between countries, the two top billionaires of the world have been in a feud with each other for more than 15 years. Elon Musk owns SpaceX and Amazon billionaire Jeff Bezos runs Blue Origin, and both are in a race to take people to the edge of space and beyond.

But it turns out that it’s not just these guys who are trying to get into the common line first and it looks like another billionaire is about to beat them. And where is NASA in all this rocket rivalry, let’s find out.

Jeff Bezos is currently the richest man in the world and runs Amazon and the aerospace company Blue Origin which aims to send people to the Moon.

Elon Musk is the dual CEO running both Tesla and SpaceX. The hate-ridden rivalry between the two over the years has resulted in some bitter name-calling and Twitter brawls. But now Bezos is surpassing Musk in a big way or is he.

Jeff Bezos recently announced that he will soon fly to the edge of space on his New Shepard rocket to prove that it is completely safe for space tourists. Elon Musk, on the other hand, has no plans to go to space yet.

But expressed interest in joining Japanese billionaire Yusaku Maezawa in his journey around the Moon in a new Starship super-heavy rocket to be launched in 2023. Musk has also said that he wants to go to Mars and live his life there.

But Bezos is better than Elon and that’s how this rivalry between these guys started. As of 2004, both Blue Origin and SpaceX were still in their early stages and neither had yet completed a launch.

However, Bezos and Musk met each other to discuss their reusable rocket ambitions, and let’s say it didn’t go well. Musk said he tried to offer some advice to Bezos but Bezos largely ignored Musk.

Musk and Bezos remained on their own since that time, but the rivalry heated up again in 2013 when the two companies tried to lease the same launch pad from NASA. SpaceX wanted exclusive use of the NASA launchpad, and Blue Origin filed a formal protest with the government to block SpaceX from using the pad.

Bezos suggested that it should be converted into a commercial spaceport for all launch companies. Musk called it a spurious blocking tactic and took a swipe at the blue origin, saying the company hadn’t built a reliable orbiting spacecraft, even though they spent more than 10 years to build one.

However, Musk said that if Blue Origin somehow produces a vehicle qualified to NASA’s human rating standards that can dock with the space station, SpaceX will happily meet their needs.

But then Musk explicitly stated that I think we are more likely to discover unicorns dancing in the flame duct. By the way, SpaceX acquired the rights to occupy the launch pad. And this is not all the misfortune that the blue native has suffered.

They recently lost a contract with SpaceX to NASA to build a lunar lander that will deliver astronauts to the surface of the Moon in 2024. Bezos was not happy with the decision and filed a protest accusing NASA of shifting target positions to contract bidders. eleventh hour. This was a big blow to the blue original.

Of course, Musk fired back at Bezos and his 50-page protest with a tweet saying “Can’t make it to orbit” That’s you Elon Musk.

But we told you early on that there’s another billionaire who looks like he’s going to beat both Musk and Bezos at their own game. Virgin Galactic and its founder Richard Branson have also been working for the past 20 years to take the VSS Unity rocket plane to the limits of Earth’s atmosphere.

He says that Elon Musk is stable on Mars and this is his life mission while he and Bezos want to use space to improve Earth. This rocket plane is really something worth seeing.

It is towed in the middle by a large mother ship jet named Eve and when released at the correct altitude the Spacecraft II Unity and its rocket push the craft at three times the speed of sound.

But VSS Integration also had a problem and a previous flight attempt was called off due to an electronic interference issue where the spacecraft’s rocket stalled before returning safely to Earth.

Although Virgin Galactic says they have fixed the problem and have unveiled Spacecraft 3 and it looks incredibly awesome. Now there’s probably a lot of Elon Musk haters out there but it looks like SpaceX is going to beat everyone in the space race, think about it.

SpaceX has built and designed the Falcon 9 and Falcon Heavy launch vehicles, but the company also makes its own rocket engines, the Merlin One and Kestrel. Also, they are talking about building a new very large high-level engine called Merlin.

But SpaceX’s goal is to always be able to reuse the rocket’s first stage, and in December 2015 SpaceX launched its Falcon 9 rocket for the first time.

SpaceX also pulled off the first rocket to land on a drone ship in April 2016 and in 2019 SpaceX reawakened the world with a triple booster landing and two boosters landed perfectly, while the main core was a drone But landed. ship at sea.

What about SpaceX that is taking people to the edge of space like Blue Origin or Virgin Galactic. Let’s face it SpaceX’s goals are different from those of the competitors and the main focus is putting people on the surface of the Moon and Mars and that’s where the SpaceX Starship comes in.

It is a fully reusable two-stage in orbit super heavy-lift launch vehicle that can carry 100 people into space. Starship has seen some real rapid development since 2019 with the Star Hopper being successful in launching and landing and looking really cool.

SpaceX then built Starship SN5, it looked like a giant grain silo and it was surreal to see this thing take off from hover and then land successfully. But not all SpaceX starships have landed in one piece. Starship SN 9 crashed on landing and exploded in a fireball.

Sn10 landed but exploded shortly after sn11 successfully climbed to an altitude of 10 km, but exploded shortly thereafter after which three consecutive starship failures. However, Elon Musk was quoted as saying that we expect it to explode. It’s weird if it doesn’t apparently explode.

Now the US Federal Aviation Administration has stepped in and doesn’t believe these failures are intended and is watching SpaceX’s starship closely.

SpaceX is really busy trying to design its future bullet-sized starship to take people to Mars and the latest Starship SN15 performed a perfect soft landing and it didn’t explode.

SpaceX still tops when it comes to human spaceflight April 23, 2021 SpaceX’s Crew 2 mission sent four more astronauts to the International Space Station aboard the company’s Crew Dragon spacecraft, giving the astronauts a ride This became the third successful manned launch before it was intercepted. On the Russian spacecraft.

And while both Branson and Bezos are on a mission to convince and reassure people that rocket rides are fun and safe by going up on their own first. Let’s keep in mind that even spacecraft that have gone through years of testing can fail or crash.

Take the failure of the Space Shuttle Challenger in 1986, when it broke down just 73 seconds into its flight. Or Shuttle Columbia said when it disintegrated in Earth’s atmosphere on February 1, 2003.

Speaking of NASA spacecraft, where do they sit in the space race? With all this competition, NASA seems to be falling behind.

However, they are still in the running with their giant rocket, the Space Launch System, the most powerful launch vehicle built since 1960. It stands 98 meters tall with four engines producing 8.8 million pounds of thrust.

That insane amount of power can put 27 tons of cargo into space that’s 11 big sport utility vehicles and yes these are the same RS-25 engines that were used in this Space Shuttle program and this is the rocket that NASA launched on its Artemis will use for the program.

But is this rocket ready to send astronauts to the moon and is NASA lagging behind in rocket technology? For now, the space launch system is still being assembled and the Artemis project is still poised to get us back to the Moon by 2024.

SpaceX is now helping out on the lunar lander and Jeff Bezos isn’t happy with it and as long as we’re on the subject. We recently did an article about how China is trying to overtake NASA in space programs.

However, it is already becoming more difficult for the state corporations to survive in this market as they are to blame the taxpayers for their failures. But instead of a huge financial loss, they have now redesigned the future of space and space exploration.

Thanks for reading till the end. Comment what’s your opinion about this information “This Is Why Jeff Bezos Hates Elon Musk”.