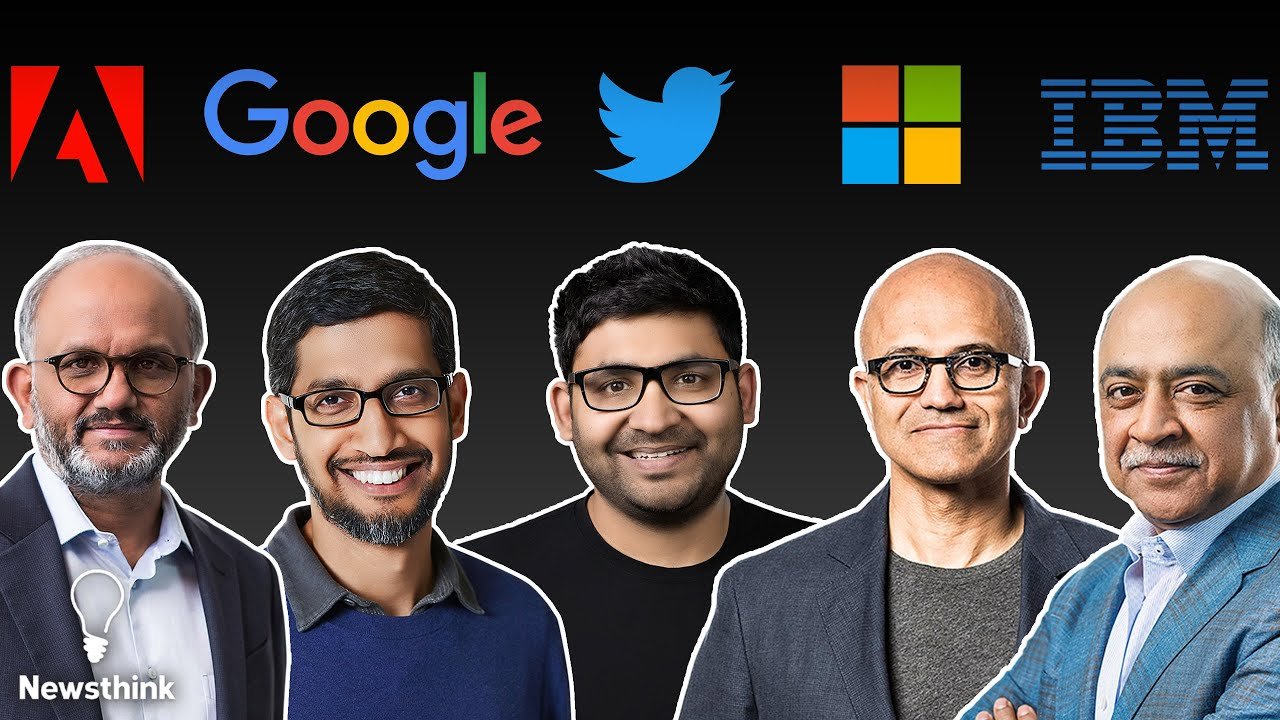 Google, Adobe, Microsoft, and IBM are all run by people who grew up in India. The latest to join these ranks is Twitter’s CEO Parag Agrawal who took over from Jack Dorsey. People originally from India make up 1% of the total U.S. population yet about 6% of Silicon Valley’s workforce. So, why are there so many tech CEOS who hail from India?

When Satya Nadella took over as CEO of Microsoft in 2014, the company was in bad shape. Bill Gates was reportedly an angry and difficult boss. His successor, Steve Ballmer, apparently wasn’t any better. Microsoft was also a dinosaur. It had failed to innovate.

For example, it lost the smartphone battle to Apple. Along comes Nadella, an engineer who rose through the ranks of Microsoft to become the CEO. Nadella changed the culture of the company. He made it clear anger and yelling wasn’t welcome. He also sought to make Microsoft relevant.

We now need to make Microsoft thrive in a mobile-first and cloud-first world. Under his direction, Microsoft moved its software to non-Windows devices and expanded its cloud business Azure. That innovative spirit of problem-solving was bred in his native country.

India is home to nearly 1.4 billion people. It’s the second-most populous country on earth, after China, and is expected to overtake China as the most populous country in a few years. Although India has made remarkable progress, poverty is still a major challenge. Nearly a quarter of the population lives below the poverty line of $1.90 a day according to the United Nations Development Programme. They face corruption, poor infrastructure, and limited opportunities. So they learn to be resilient, adapt, and overcome endless obstacles.

This leads them to be problem-solvers – a key asset in any corporation. Sundar Pichai has had to solve many problems after taking over at the helm of Google in 2015…at a time when big tech is being scrutinized over the power they hold.

He became the archetype of a kinder, calmer, gentler leader in tech. Pichai earned an engineering degree at one of the Indian Institutes of Technology. The IITs are kind of like the Indian equivalent of MIT with an even lower acceptance rate reportedly of 1% or 2%.

After Pichai graduated, his ticket to America came in the form of a Master’s at Stanford. Going to a top grad school in the States is how many Indians land up in the land of opportunity. They appear to follow this well-trodden path: They did their undergrad at a great school in India. Got a Master’s in the U.S. Where they studied STEM – science, technology, engineering, and mathematics. More than half of all international students in America pursued a STEM degree in the past academic year. American immigration favors people with specialized skills.

After Pichai graduated, he went on an H1B visa to work at consulting firm McKinsey. The H1B allows American companies to employ foreign workers, many of whom are in IT-related fields.

The U.S. government awarded nearly 75% of these visas to Indians in 2020. In comparison, China trailed far behind in second, at 12%. The fact that so many Indians can speak English is a tremendous advantage in the West. And they’re comfortable with American business culture, possibly because it mirrors the thriving IT industry back home in Bangalore, Chennai, and Hyderabad.

They’re also more likely to want to work overseas. 80% of Chinese international students return to China after graduating, according to China’s Ministry of Education. Chinese entrepreneurs prefer starting their own companies at home. Alibaba is known as the “Amazon of China” Tencent owns the messaging app WeChat used by 1.2 billion people. Huawei is one of the giants of the tech industry.

China’s transition from a manufacturing hub to a tech hotbed has largely been driven by government policy. In the late seventies, Chinese leader Deng Xiaoping encouraged foreign businesses to set up offices in China which fostered a start-up environment.

On the other hand, India has a problem of too much talent leaving the country for good. It has the highest number of migrants living abroad at 17.5 million, according to the UN. And more Indians gave up their passports to become naturalized American citizens in 2020 than the Chinese, continuing the trend from past years. However, the brain drain from India may be starting to recede.

An increasing number of homegrown Indian startups are becoming unicorns – meaning, the companies are valued at $1 billion or more. India created 47 unicorns in 2021. A significant jump from the 17 in 2020. And even less in years past. The tech ecosystem is being bolstered by powerful investment firms such as Softbank that have been pumping money into Indian startups. But in order to entice more people to remain in their native country, salaries will have to catch up with those in the West.

The average American tech worker earns around $98,000 a year according to the online recruiting platform, Dice. Tech salaries in India vary greatly, but the jobs site Indeed pegs the median tech salary at $20,000 US going up to as much as $33,000 which makes them some of the top earners in their country but still, far less than what they’d make in the States.

As salaries grow along with India’s startup boom, this could have implications for the number of exceptional individuals desiring to move abroad. The one thing that the CEOs of tech giants have in common is their strong background in engineering.

Thanks for reading till the end. Comment what’s your opinion about this information “ why are there so many tech CEOS who hail from India?“.

3 thoughts on “Why So Many CEOs are from India”