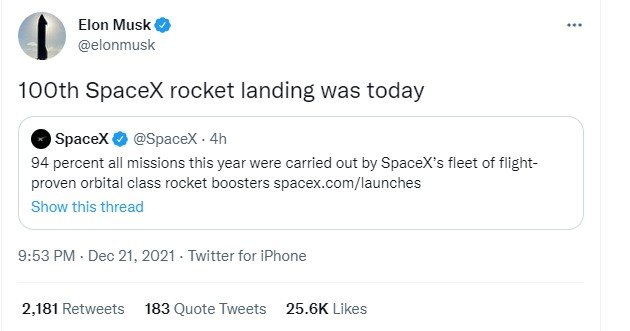 Hello guys, 10 minutes ago I saw a notification and there our favorite super-businessman Elon Musk tweeted this “100th SpaceX rocket landing was today“. And now we are going to explore why he tweeted this.

The only reason for this tweet is, on today 21st December 2021 SpaceX completed its 100th rocket landing, In other words, in the upcoming years we will celebrate this day as a “SpaceX 100th Rocket Landing Aniversary”.

On this tweet, Elon Musk mentioned @SpaceX where SpaceX posted this “94 percent all missions this year were carried out by SpaceX’s fleet of flight-proven orbital class rocket boosters“.

And when I visit the SpaceX website I get this:-

On December 21, 2021, SpaceX’s Falcon 9 rocket launched Dragon on the 24th Commercial Resupply Services (CRS-24) mission for NASA from historic Launch Complex 39A (LC-39A) at Kennedy Space Center in Florida, completing our 31st and final launch of the year. Dragon separated from Falcon 9’s second stage about twelve minutes after liftoff and will autonomously dock to the space station on Wednesday, December 22.

CRS-24 also marked the 100th recovery of an orbital class rocket booster. SpaceX remains the only launch provider in the world capable of propulsive landing and re-flight of orbital-class rockets. While most rockets are expended after launch — akin to throwing away an airplane after a cross-country flight — SpaceX is working toward a future in which reusable rockets are the norm. To date, SpaceX has:

2021 was particularly impressive, during which the SpaceX team:

In the year ahead, SpaceX’s launch cadence will continue to increase, as will the number of flight-proven missions, human spaceflights, Falcon Heavy missions, and people connected with the internet by Starlink. We’re also targeting the first orbital flight of Starship, and have resumed the development of a lunar lander for NASA that will help return humanity to the Moon, on our way to Mars and beyond.

Also, Read This If You Have Time:

2 thoughts on “Elon Musk tweeted “100th SpaceX rocket landing was today”, but why”