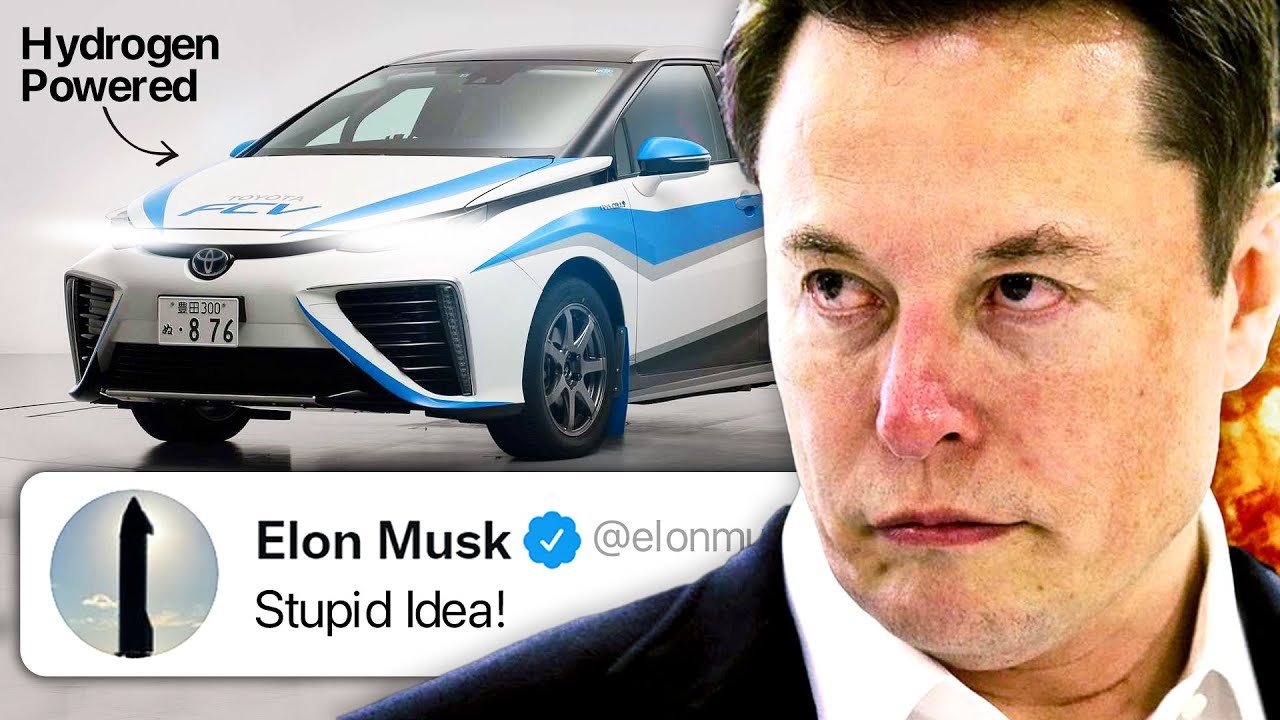 Why Elon Musk HATES Hydrogen Cars: Tesla’s founder and CEO, Elon Musk is a man that has a smoking gun that he is tactfully using to destroy hydrogen cars. He is firing Tweets aimed at annihilating the idea of Hydrogen cars.

As a Physics graduate, Elon Musk seems to understand the Physics of fuels more than most of us. As such, we would not be quick to ignore his attacks against the use of hydrogen fuel for cars. Probably, the tech genius has a brilliant reason for opposing Hydrogen Fuel Cell Vehicles (FCVs).

Join us today in this article as we investigate how , why and with whom Elon Musk is destroying Hydrogen Cars. By the end of the article, you will be able to decide whether you will go for a Tesla Electric Vehicle (EV) or a Toyota Hydrogen Fuel Cell Vehicle (FCV). Stay Put.

How Musk is Destroying The Hydrogen Car : Using Verbal and Twitter Attacks. Elon Musk who is the Founder and CEO of Tesla Inc. uses any means at his disposal to attack and destroy the concept of Hydrogen Cars.

The Tech genius does not mince his words when gets an audience to criticize the Hydrogen Fuel Cell Vehicles. Some months ago, he just did that when he attended the Automotive New World Congress. Elon described the hydrogen fuel cells as “extremely silly”.

He justified his harsh comments by saying that it is very challenging to make and store hydrogen. He added that the fuel cells are nonsensical as the best of the hydrogen fuel cells is no match for the current batteries.

As a veteran and expert in Twitter wars, Musk fired a shot at the hydrogen cars in June 2002 by Tweeting that ‘fuel cells=fool sells’. He aggravated the situation by posting another Tweet that read “hydrogen fool sells make no sense”.

Musk must have succeeded in destroying the hydrogen cars given his huge Twitter following of 63 million people. The billionaire is using his fame and influence against hydrogen cars.

Musk considers the idea of hydrogen cars to be simply stupid and silly. The tech genius has sufficient reasons that justify his actions of attacking the Hydrogen Cell Fuel Vehicles.

With more than 18 years of experience in his auto manufacturing company of Tesla, Musk can be trusted to advise on matters of car manufacturing. Musk considers Hydrogen-powered cars to be highly inefficient.

He is also considered the concept of Hydrogen Fuel Cell vehicles to be costly and highly flammable. Inefficiency To begin with, Musk has launched a scathing attack against hydrogen cars as he considers them highly inefficient. An electric vehicle is 3 times more efficient than a hydrogen car that uses hydrogen that has been generated using the same power grind.

The tech genius is opposed to hydrogen cars since the process of transferring energy from sources is very complex. Remember Musk is a genius and will like it when things are done in a more simplified and efficient manner.

Robin Sharma says it better ‘Simplicity is the Trademark of Genius’. The process of realizing nitrogen as fuel begins by using electric power to separate hydrogen from the other gases in the environment.

The trapped hydrogen is pumped into trucks for transportation to the hydrogen filling stations. The hydrogen is then expected to react with oxygen to produce the energy that is needed to propel the car. What a long process! On the contrary, an electric vehicle has batteries that can be recharged when it is plugged into a source of electricity.

The electricity that is stored in the filling stations can be sourced from renewable sources of energy such as wind and solar energy. The Tesla CEO is also against the concept of hydrogen cars as they can be very inconvenient to the users since they can only be recharged at a hydrogen station.

Hydrogen has less energy per unit volume than all other fuels. This simply means a large volume of hydrogen will be needed to produce a certain amount of energy which can be produced by other fuels such as petrol or diesel.

Musk criticizes hydrogen cars as they will need to have very large containers for storing the oxygen. The large hydrogen containers are a big setback for using hydrogen in cars since cars are small in size. The process of extracting hydrogen is also expensive as it uses electricity in the process and also involves many steps.

Hydrogen is also expensive as it is limited even in an atmosphere where it accounts for 0.0005% while other gases such as Nitrogen and Oxygen account for 78% and 21% respectively. Maybe Musk should use Nitrogen gas as a final blow to Hydrogen.

Nitrogen will be a great tool in Elon Musk’s hands as it is sure to defeat hydrogen. Hydrogen can dominate in the car fuel industry just as it dominates in the atmosphere. But wait. What of the scientific properties that may limit it? That is a story for another day.

Flammable Musk also finds fault with the hydrogen cars since they are propelled by the highly flammable hydrogen gas. Hydrogen is a highly combustible gas when it mixes with oxygen in the right ratios.

Safety risks are at their highest when hydrogen is under transit to the refueling stations. Did you know that hydrogen is used as fuel by the stars? The hydrogen powers nuclear reactions that make the stars burn for years.

We can only think of catastrophes that hydrogen will cause in case it leaks and explodes. Hydrogen filling stations in California use sensors to monitor for leaks. California is the home of Hydrogen Fuel Cell Vehicles.

Who Else is Supporting Musk in Destroying Hydrogen Cars?

The world’s richest man is not alone when it comes to pushing for the termination of Hydrogen Cars. He is too rich to be alone. Even in a bar, you can have many friends on your table so long as you have the money.

Elon has one of his own supporting him. Herbert Diess, the CEO of the German Automotive Giant Volkswagen is the man who shares the sentiments of Tesla’s CEO. The Volkswagen Group CEO believes that hydrogen should be used in the chemical, steel, and aerospace industries instead of being used to power a hydrogen car.

Mr. Diess is breathing fire as he has in the past told off politicians on the matters of hydrogen cars. Ooh Yes, Political Science is not the type of science that is needed here. Chemistry and Engineering are the types of science that will give the best solution.

Let us have a gist of the real science regarding hydrogen cars. Hydrogen cars work on a simple concept; when hydrogen reacts with oxygen in the right amounts to produce water and energy. Scientifically it is expressed as2H2 + O2 = 2H2O + Energy.

Musk, who is a Physicist and Diess, a mechanical engineer are better placed to advise on whether hydrogen cars should be embraced. Both Tesla CEO and Volkswagen CEO have heavily criticized hydrogen cars since they use hydrogen which is expensive, inefficient, and unrealistic on a large scale.

Even the US government seemingly agrees with Elon’s ideas that Hydrogen cars are not the best for the future. The American government has a lot of doubts about the durability and reliability of Energy hydrogen cars.

Even though the Tesla CEO has made significant attacks on the hydrogen cars, the war is far from being over. The mere fact that the idea of Hydrogen Cars is catching our attention, is clear proof it still has an impact however insignificant it may be.

The Japanese Automaker has plans of increasing the production of the Mirai Hydrogen cars from 3,000 per year to 30,000 units by 2021. As you can see, Musk’s fight on hydrogen cars is not yet over. In the meantime, Musk has managed to score a goal or two against hydrogen cars.

But the game is still on and anything could happen. It is too early for the Tesla CEO to start celebrating despite him dominating the game. We need to wait for the final whistle. Before then we can place a bet. It is 2.0 for Musk and 1.79 for Hydrogen Cars. Wishing you all the best.

Thanks for reading till the end. Comment what’s your opinion about this information “Why Elon Musk HATES Hydrogen Cars”.