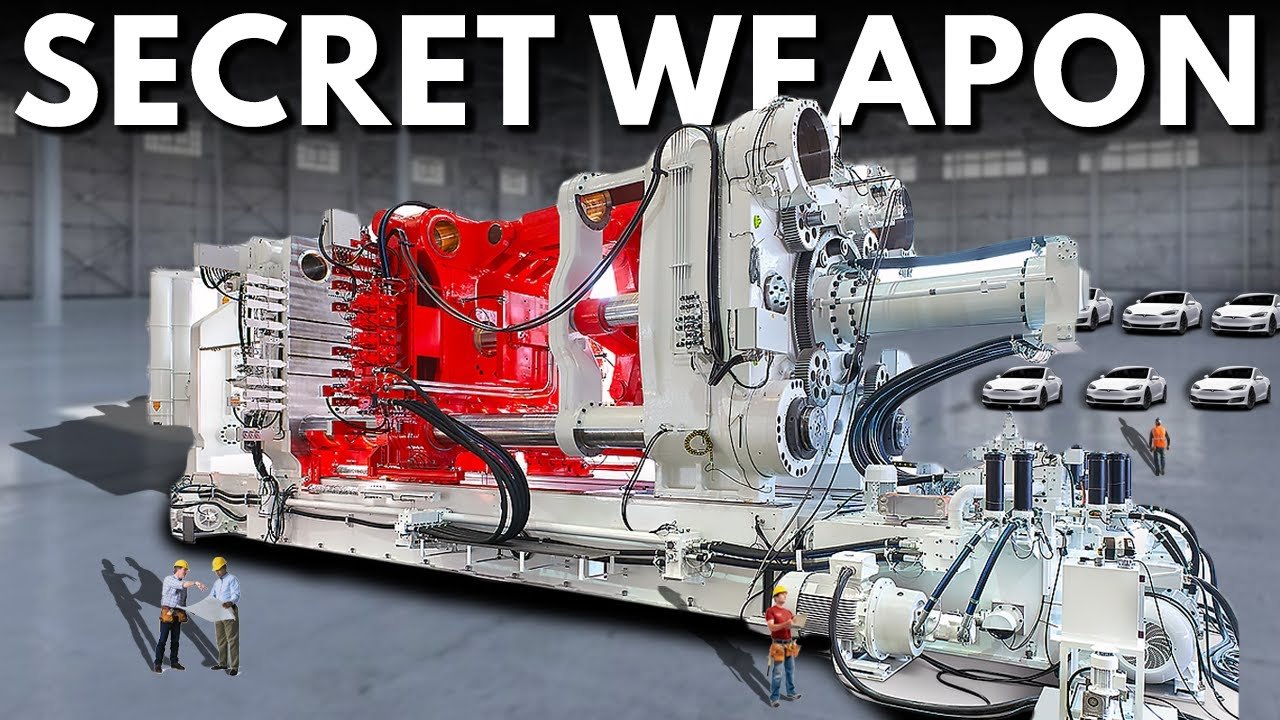 Giga Press Will RUIN The Industry According to Elon Musk: From Tesla to SpaceX, Elon Musk has become a household name. But what is next for this futuristic entrepreneur? The Gigapress Machine – A gigantic machine that will make Tesla and Elon Musk’s life much easier.

With this newly improved addition to the Tesla family, Elon aims to turn the tide and change totally what we thought was and was not possible. Join us in today’s articl as we will explore exactly how this gigantic machinery will change the car manufacturing as we know it.

Elon Musk and his team are growing the strength of Tesla tremendously. What started as a car production mission, has now transformed into a total move to take over the EV industry.

With its massive innovation and insane technologies, Tesla has become a major force to reckon with in the Electrical automobile industry.

What is Giga Press?

Giga Press, the enormous high-pressure die casting machine, is one of the largest in the world. It is a series of aluminum die casting machines manufactured by an Italy-based group known as Idra Group, a subsidiary of LK Tech. Each of these humongous machines weighs 410-430 tonnes, with features that push the length of what we thought was impossible.

Giga presses are used to make components, in this case, cars, in a single large piece through die casting. To do this, they produce a large amount of force for extrusion or injection. It would interest you to know that the name Giga Press was not given to this multipurpose tech by Tesla, even if it seems like a name Tesla would come up with, IDRA came up with the name.

And as we have reiterated almost all through this section, these machines are huge. Making The Giga Press Work for Tesla The size of this machine was justified because these machines would carry out the production of cars in a single component, with no need for coupling and all that moving from one machine to the other.

The Giga Press did not just fall into Tesla’s laps. These humongous machines presented many engineering challenges for the Italian group, IDRA, as it tried to make it work for Tesla.

The general manager of the group said that it took more than two years of research and development to get to where it would work for Tesla. IDRA had to design a new injection system that could load 100 kilograms of aluminum into the die cavity in 60 to 100 milliseconds.

You can order either the 6000 tons, 8000-tons or the newly improved 12,000 tons. Types of Giga press machines Tesla has developed a whopping 12,000 ton Giga press for the production of a one-piece car body.

This is a considerable milestone for the car production company, putting it another step ahead of other manufacturers of EVs. The company is currently using two types of 6000-ton Giga press to cast the one-piece rear of the car and the one-piece front end of the car.

And Giga Texas has already started testing the Giga Press, therefore, the front end casting will be fully ready when production starts. The other type of Giga press with a clamping force of 8,000 tons, will be used for the rear of the new, coveted, and massive Cybertruck.

According to Elon Musk, Tesla intends to use a similar Giga press for the Model Y, but the clamping force for producing the rear part of Cybertruck will be 8,000 tons. According to inside sources, this Giga press is already under production.

Tesla’s Use/Benefit of The Gigapress The IDRA group boasts that the gigapress saves 40% on energy consumption and more stable injection conditions for manufacturing even thin walls. The gigapress fits into Tesla’s car production because the EV company wants to make some parts of its cars in a single large piece.

Many car manufacturers use die casting for portions of the chassis that benefit from localized stiffness such as shock towers, but Tesla uses the Gigapress to replace the entire rear sections of the chassis. This replaces multiple stampings that would have been fastened together.

The Giga press was used by Tesla in its production of the Model Y, with significant gains. First, despite being massive, this multipurpose tech has helped Tesla save on the body shop’s size by 30%. This means more production can take place in the same factory.

The gigapress was a drastic production and design change for Tesla because instead of managing 70 pieces of metals, it now handles a single die-cast part which is very efficient manufacturing. In an official tweet by Tesla, the claim was corroborated.

The tweet calls the Giga press, the world’s biggest die casting machine. Apart from saving the company time, this machine would also save money in salary, as the machine would require fewer factory hands. J.P Morgan claims that is 20% savings in labor costs.

It also means less logistics or transportation, less storage spaces, reduced nifty packing, and many more. Giga Presses also improve the quality of the finished product since there is no welding or riveting involved.

This is a single piece, the potential misalignment problem is non-existent. As you would agree, joining those 70 pieces is no fun or easy task. It involves sealing between them, a very difficult task involved for the highly improved machine to perform.

Even Musk calls the process a nightmare. Using Giga press will allow Tesla to move on to structural battery cases as it has been planning to do for a long time now. Elon said at Tesla’s battery day -event, that the leading EV brand had finally figured out how to do it.

These battery packs serve as the stressed center member of the vehicle platform that will connect the front and rear die castings. Structural batteries are the way forward for Tesla because they are lighter and pack the cells more efficiently.

Musk calls the current way of packing battery cells a sack of potatoes that does not have any structural value and even has to be isolated from the rest of the car and protected from vibration and shock loads. According to Musk, these changes decrease manufacturing costs and complexity.

It also reduces the weight of the finished car, which is a boost for the driving range. Giga Press Vs Robots The Giga press will also make the battery packs after it has started making the rear and front ends.

When the three parts are made through die casting, 70 parts of the car would be eliminated. Car parts are not the only thing the Giga Presses will eliminate, manufacturing robots are going on as well.

The front end also comes from these presses, that’s another 300 retired robots and that’s before getting to the battery packs. For the Giga press machines to replace robots that are generally fast and precise, means that these machines are effective and twice as fast as robots.

Also, setting robots up is another difficult task. They have to be accurately positioned, bolted down to the factory floor securely, and tested rigorously to make sure they all work together.

A robot that is not accurately positioned to be securely set, can wreak extreme havoc to the car, or worse, to the person controlling it. Robots also need maintenance to retain their accuracy and speed.

This means that the robots need to be regularly and properly serviced and maintained to retain their effective operation. So getting rid of them is a big deal. It’s more like a payback time, or a poetic justice if you like.

These robots have made humans lose their jobs, now the high definition Giga press machines are taking over theirs. Generally, robots are not entirely safe and cost effective. As we have said, it requires servicing, constant repairs, and a critical installation before use so as to prevent casualties.

The Giga Press machines would require little less robots and it would produce more at a record time. According to Musk, the Giga Press will help get rid of at least 600 robots out of the existing 1000 robots.

This elimination equals more money saved up to be spent on other inventions or innovations. Before getting the Giga Press, Tesla managed as much as they could, but Elon knew that die casting was the best way to make cars.

Thanks for reading till the end. Comment what’s your opinion about this information ” Giga Press Will RUIN The Industry According to Elon Musk”.