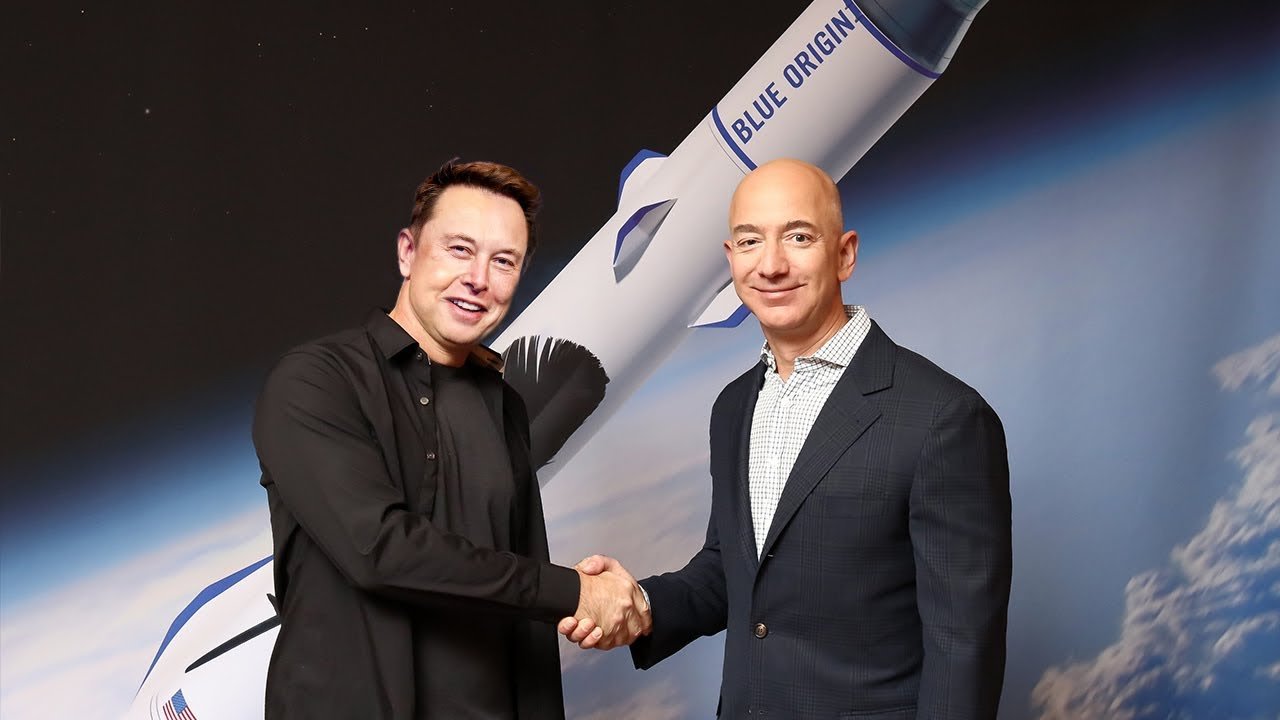 Elon Musk’s SpaceX & Blue Origin Working Together On A Mission: Spacex and Blue Origin have been at each other’s throats for the past couple of years. But now in a surprising turn of events, the two titans are set to collaborate on a project.

Spacex, Blue Origin, and a few other companies were recently awarded NASA contracts to develop moon lander concepts for future Artemis missions. So how will the rivals work together.

Cook and Chevalier enterprises and Blue Ridge Nebulous Star Lines were the only companies that submitted proposals and didn’t get contracts. According to NASA, the objective of the contracts is to develop moon landers, design concepts including conducting component tests and analyzing them for stuff like performance and safety.

These designs will be developed over the next 15 months evaluating their performance, design, construction, standards medical capabilities, crew health accommodations, and general safety. According to NASA’s Kathy Looters establishing a long-term human presence on the moon by using lunar landers is a major goal for the Artemis mission.

This will lay the foundation for us to learn more about the moon and how to live and work off-planet in deep space. For future missions that will travel farther into our solar system.

Before you rack your brain and start to think. This is familiar we should mention that these contracts are separate from the human landing system contract that was awarded to spacex earlier this year.

You know the one that Blue Origin disputed with a government watchdog and later in a lawsuit against NASA. This is still ongoing so the obvious question is why would NASA even get into business with the company that’s out for its blood.

Some people might think of blue origin’s contract as little more than a consolation prize after losing out on the huge 2.9 billion dollar HLS contract, that was awarded to spaceX.

Losing out on this contract may have been the straw that broke blue origins back why because of the messy lawsuit that has effectively crippled the development of the HLS and by extension the Artemis project. As a whole yes people mankind’s return to the moon could be delayed by a tantrum.

These recent events have only added fuel to the fiery rivalry between Elon Musk and Jeff Bezos. And if you happen to be on Twitter you already know who’s winning according to RS Technica.

An anonymous source from NASA claimed that because of the lawsuit against NASA, Blue Origin would never get another real government contract after what it had done. Could that be true let’s take a look at the latest contract NASA awarded to Blue Origin?

All five of these new contracts are under NASA’s next space technologies for exploration partnerships appendix and sustainable human landing system studies and risk reduction.

Here’s the curveball it’s actually under a different section of the same HLS contract awarded to spaceX in august. What that means is Blue Origin may not be working for NASA but may actually be working to support SpaceX’s vision for NASA’s HLS. Definitely not what Bezos had in mind.

To retain a competitive environment NASA announced that it would get recurring landing services from American companies. These recurring contracts will be for operational missions to the lunar surface after SpaceX’s demonstration missions.

According to the agency, the most recent contracts would ultimately help shape the strategy and requirements for NASA’s pick to provide regular astronaut transportation from lunar orbit to the surface of the moon.

The amount of those future recurring service awards will be determined by congressional appropriations. It should be noted that blue origin’s proposal came from what it refers to as its national team which includes Lockheed Martin, Northrop Grumman, and Draper.

Blue Origin spokesperson explained that under this contract, the national team will conduct critical studies and risk reduction activities that will contribute to sustainable lander concepts in the future.

Blue Origin will also work closely with a multitude of other companies and NASA field centers across the nation. After winning its contract this week Northrop Grumman said that it remained committed to the national team but was also keeping its options open ouch that’s gotta hurt.

Northrop Grumman’s vice president of civil and commercial satellites Steve Crine said that Northrop continues to work in partnership with Blue Origin and the national team to meet NASA’s ambitious goals to return to the moon and go to mars.

On top of these collective efforts, Northrop Grumman will also be providing its unique skills and capabilities to exploring alternative perspectives, For a long-term sustainable program to take humans back to the moon and even settle there.

According to ARS Technica, an unnamed source confirmed that the national team is likely to stick together for so long. As there’s a chance to win the original contract the one NASA chose to award solely to spacex.

The lawsuit against NASA is expected to be settled by November 1st. During this time NASA’s agreed to keep its contract with spacex intact until that date.

Thanks for reading till the end. Comment what’s your opinion about this information “Elon Musk’s SpaceX & Blue Origin Working Together On A Mission”.