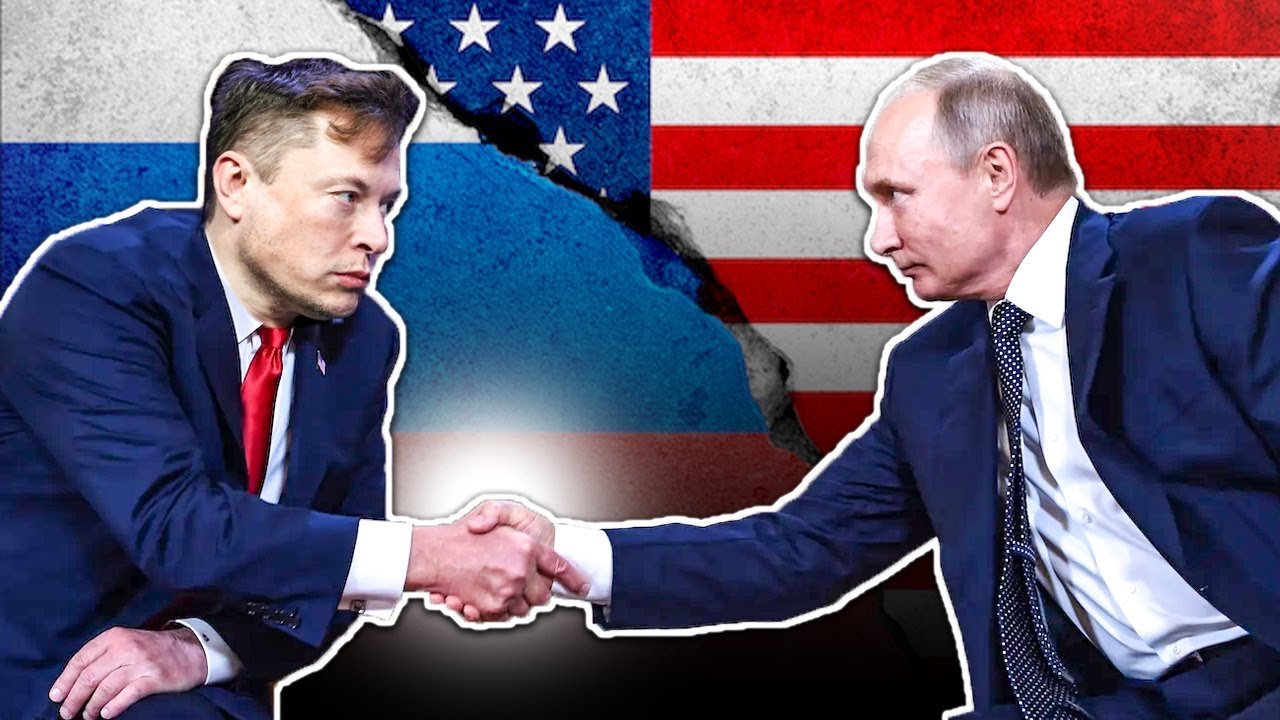 Why Russia Desperately Wants Elon Musk To Move In: We’ve always known Russia and the US to be rivals on so many grounds, including space travel.

That rivalry is part of the inspiration that led Russia’s space agency, Roscosmos, Director in Chief, Dmitry Rogozin, to take several jabs at SpaceX and NASA a few years ago.

However, now, it’s the same person publicly expressing how delighted he’ll be if he can get Elon Musk to come to Russia to discuss interplanetary travels over a cup of tea. But What has changed? Why does Russia want Elon Musk to move in so badly? Well, we will find out in just a second.

Why Russia Desperately Wants Elon Musk To Move In

Back in February of 2021, Tesla CEO Elon Musk asked Russian President Vladimir Putin on Saturday if he wanted to talk on Clubhouse, an up-and-coming social media site that links individuals through audio chat rather than posting status updates or sending direct messages.

Musk tweeted directly to the official Twitter account of the President of Russia, asking: “would you like to join me for a conversation on Clubhouse?” He followed up with a tweet in Russian that said, “it would be a tremendous honor to talk with you.”

In the end, it did not pan out, but it has raised the interest of Russian aerospace leaders in Elon Musk. Russia’s space commander has expressed appreciation for Elon Musk and invited the SpaceX and Tesla CEO to visit him in Russia in September.

“Mr. Elon Musk realizes many of the ideas and thoughts that we wanted to realize but did not get to because, after the breakup of the Soviet Union, our space program halted for some time,” Roscosmos’ Director General Dmitry Rogozin said in an interview with CNN.

He added that he wanted Musk to travel to Russia “to be a guest of (his) family,” where they can discuss “exploring the universe, extraterrestrial life, and how we can use space to preserve life on Earth.” “I already set the teakettle on heat,” he further said. Rogozin added that he respected Musk “as an inventor, who is not afraid to take risks.”

He also had praise for billionaires Jeff Bezos and Richard Branson, saying that they are spending their money on “things that are useful for society.” “Our millionaires prefer to invest more in yachts rather than in spaceships.

But maybe kids of current Russian millionaires will be much more wise creatures,” Rogozin said to CNN. This is as high a praise as any of these billionaires get, with the usual convention being that of harsh criticism.

It’s strange because it was not long ago that Rogozin and Musk traded jabs. Last December, the Roscosmos chief took a shot at Musk’s SpaceX on Twitter, sharing a photo of Roscosmos personnel trekking through a thick snowstorm to collect a piece of a Soyuz rocket.

“This is not Boca Chica. This is Yakutia in winter. I wonder if gentle SpaceX is able to work in such conditions?” wrote Rogozin at the time, referring to the Texas border town where Musk’s SpaceX facility is located.

Rogozin also tweeted a jab at NASA in 2014 after the US sanctioned him for his role as the Russian deputy minister of defense during the Russian annexation of Crimea. “

After analyzing the sanctions against our space industry I suggest the US delivers its astronauts to the International Space Station (ISS) using a trampoline,” Rogozin tweeted. Musk clearly hadn’t forgotten Rogozin’s jibe when he commented last May that the “trampoline is working” after SpaceX launched its first crewed mission to the ISS.

So, why does Dmitry Rogozin suddenly want to be friendly with Musk now? First, if Rogozin could persuade Musk to pay him a visit in Russia, he and the country’s space program would be able to bask in his reflective glory.

Musk has a strong admiration for Soviet rocketry; he just spent an hour at SpaceX’s headquarters with Sergei Korolev’s grandson. Sergei Korolev is regarded as the father of modern astronautics.

During such a visit, Musk would definitely complement Russia’s space program. Rogozin might present himself as an equal by meeting with Musk. This would be valuable propaganda for both him and Russia’s faltering space program.

It’s probable that attracting Musk to the forthcoming Soyuz launch is just as crucial to Rogozin, if not more so. This is due to the fact that Rogozin and Roscosmos have put a lot of money on this journey, which will be piloted by cosmonaut Anton Shkaplerov and will transport two other passengers: Yulia Peresild and film director Klim Shipenko.

The actress and director will spend roughly ten days on the International Space Station filming The Challenge.

This film project has generated controversy among Russia’s cosmonaut corps, as it has resulted in a quick rescheduling of flight plans, and the funding for the film has come from the space corporation’s budget.

However, the film is a top priority for Rogozin, who wants to have something to display in the 60th anniversary of Yuri Gagarin’s momentous maiden spaceflight in April 1961.

Making the first “feature picture” in orbit, according to Rogozin, would be another “history first” for Russia in space, following in the footsteps of Gagarin’s flight, Valentina Tereshkova’s trip in 1963, and other Soviet achievements in the 1960s.

Some, though, are dissatisfied, like veteran cosmonaut Fyodor Yurchikhin, who sees a country relying on decades-old technology for human spaceflight and promises rather than actual initiatives for the future.

Tesla has also received much attention from Russian industry officials. Elon Musk said at a presentation in Moscow earlier this year that the firm was contemplating establishing a production base in Russia, according to Reuters and Bloomberg.

According to Bloomberg, Musk stated that Russia is one of the nations where the carmaker may “possibly” establish a facility. He appeared via video connection at the Kremlin’s New Knowledge conference for students.

The Russian automobile business is gradually evolving toward a service-oriented model, with new entrants concentrating heavily on customer experience and consumer data.

This is a sharp turn from the Soviet model that existed until the late 2000s, that focused on practical product building. Transitions in automobile markets are creating possibilities for some parts, while other components are expected to fall sharply.

Geographic diversity is one of the primary tactics used by top automotive manufacturers to guarantee profitability in the face of significant investment and R&D expense.

In the country, both major companies and start-ups are vigorously concentrating on connected and autonomous driving automobiles. A strong government focus on promoting the country’s automobile sector is a major driving factor for Russia.

Stringent environmental rules on pollution and carbon emissions, on the other hand, necessitate large investments. The latter part fits perfectly in with Tesla’s vehicles and the value they can bring to the Russian car market.

Musk has been vocal about his desire to enter the Russian car market. “Over time, we will look to have factories in other parts of the world, potentially Russia at some point,”

Musk said. “I think we’re close to establishing a Tesla presence in Russia, and I think that would be great,” he added. Musk said there should be “more dialogue” between the US and Russia, and that Russia possesses “a lot of talent and energy,” per Bloomberg.

Following the ratification of the Paris Agreement by order from President Vladimir Putin, Russia established an official aim of reducing greenhouse gas emissions to “70-75 percent of 1990 emissions by 2030.”

In Russia, many businesses don’t believe in climate change and don’t just think of it as a real threat to the environment. In addition, they believe that carbon regulation and the creation of greenhouse gas emissions trading policies are the steps taken by Western countries to gain a competitive advantage over other developing economies through the “capitalization of carbon emissions trading.”

Thus, it seems as if the Russian government will take steps to reduce their emissions no matter what, and introducing Tesla to the Russian car market seems like a very good idea to them due to the obvious fact that Tesla cars are electric cars that do not produce any carbon dioxide emissions during use.

The strategy’s main goal for 2030 is to reduce greenhouse gas emissions by 33% compared to the 1990 level by 2030. This strategy will soon be legally formulated and officially presented to the Paris Agreement by Russia.

Not only will the entry of affordable Tesla cars make it easier for the emissions to be reduced, but local competitors will also innovate quickly in the EV field in order to compete with Tesla, ensuring affordable EVs for all.

Another field of innovation in this regard is the bid for synthetic ultra-low emissions petrol and microwave spark plugs, whose successful development will be able to pose significant competition to EVs.

This will contribute to reducing carbon dioxide emissions across the board. Being a billionaire is enough to guarantee you the attention of powerful industrialists and heads of state, who will try to get on your good side.

Being a billionaire with the power to overturn industries and create entirely new lucrative ones? You’re on a roll. Whole countries will want you to come over.

Thanks for reading till the end. Comment what’s your opinion about this information “Why Russia Desperately Wants Elon Musk To Move In”.