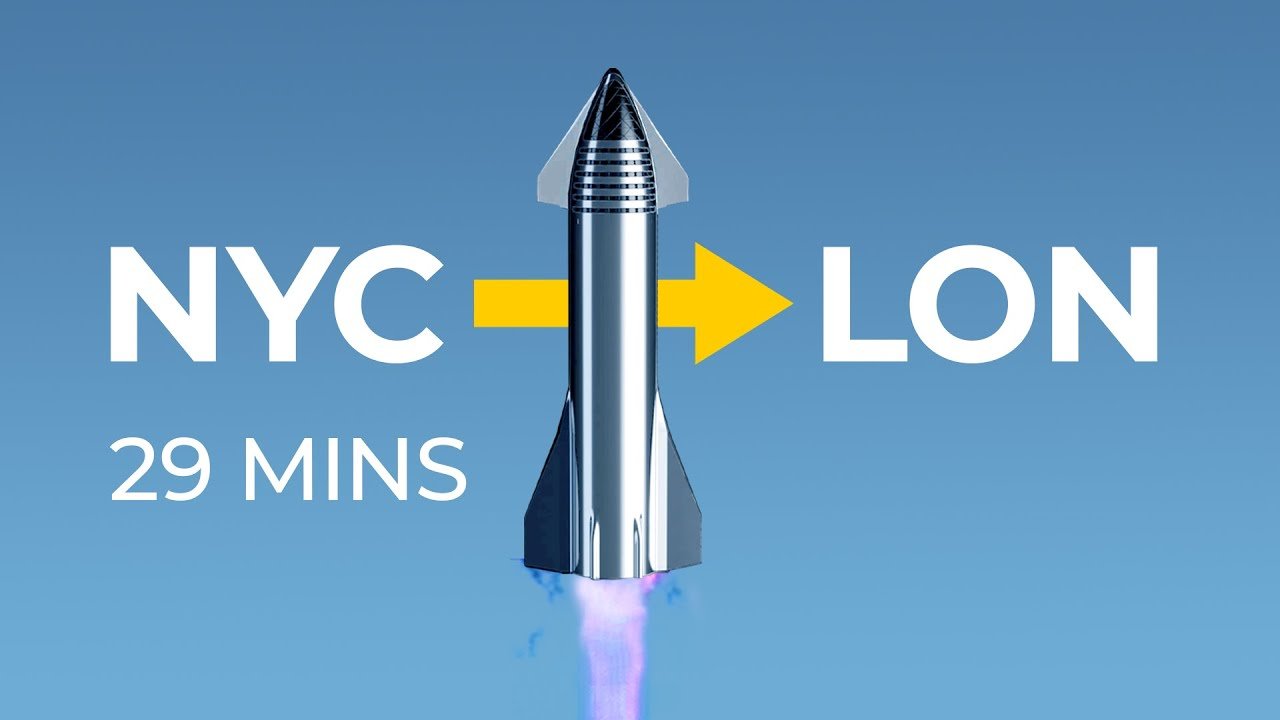 Is the idea of replacing airliners with rockets just a dream?: From March 1969 until October 2003, we had supersonic passenger travel. With Concorde, we could travel from New York to London in just 3 hours, a journey that would previously take at least 7 hours.

In just over a decade, long-haul flights had changed dramatically. Airplanes were crashing less, flights were getting cheaper and the world was opening up to more and more people. With new routes appearing every day, people were able to visit countries they probably didn’t even know existed.

During this golden age of flying, airplanes were seen as a more comfortable and glamorous way to travel. Fast forward to now, and airplanes are much safer, efficient, and cheaper. But that New York to London flight time is now slower than it was prior to Concorde’s arrival.

After 50 years of aircraft development, how can we have gotten slower? And could the future of spaceflight give us the next big leap in technology just like Concorde did? To answer this, we need to know why Concorde failed in the first place – and why faster airplanes aren’t necessarily better.

The simple answer is money, but it’s a little more complex than that. The fuel efficiency of airplanes has gotten much better over time. This is largely down to the demand for increased efficiency, which reached an all-time high in the 2000s when the price of jet fuel rose from 70 cents per gallon to 3 dollars.

So engineers had to look for new ways to increase the fuel efficiency of modern airplanes. They found that increasing the size of the engines, could drastically change their efficiency. This is because the air can take two different paths through a jet engine.

Some of the air passes through the center, where it goes through a series of compressors before it gets ignited by the jet fuel. This creates additional thrust and also powers the fan. The rest of the air simply bypasses this section and is thrown out the back, also creating a large amount of thrust.

In the past, engines would typically get most of their thrust from the jet section. But engineers found that by increasing the fan size and bypassing more air, the engines could produce more thrust with less fuel, therefore increasing the efficiency.

In contrast, Concorde used turbojet engines which got almost all of their thrust from burning fuel, making them much less efficient than modern-day engines. As aircraft manufacturers continue to lower their emissions, it’s clear that Concorde’s fuel-guzzling image wouldn’t be very popular today.

A long-haul Starship flight would produce around 700 tonnes of CO2, this works out at around 0.8 tonnes per passenger. Compare this to a 747 and the amount per passenger is very similar, if not a little bit less.

Concorde’s CO2 output would be around 6 times more than this per flight. Thanks to these newer and more efficient engines, modern airplanes really separated themselves from Concorde in terms of their emissions. But these new larger engines had one weakness that ended up affecting flight times.

If too much air passing through these larger engines, the fan would basically act as a wall, slowing the plane down and requiring more jet fuel to be burned. This is why aircraft manufacturers recommend an optimal cruising speed between 880 and 925km/h, where the engines are most efficient.

To put that into perspective, a typical passenger jet in the ’60s would fly much closer to 1,000km/h. Flying at these slower speeds saves airlines an enormous amount of money. JetBlue saved 13 and a half million dollars in a single year by simply adding 2 minutes to their flight times.

With newer airplanes being much more focused on efficiency and cost-saving, Concorde’s extreme running cost of 10,000 dollars per return trip started to seem more and more absurd. The running costs for Starship will no doubt be high as well, but one of the differences is that Starship will be able to carry many more passengers – around 8 times more than Concorde.

With an estimated running cost of just over 1 million dollars per Earth flight, that puts the average ticket price at around 1,200 dollars. This is a major improvement over Concorde’s ticket prices and opens up a new way of traveling to more people than Concorde ever could.

But even with these ticket prices, it’s difficult to see how Starship could take over traditional airplanes. A passenger today is much less likely to pay more for a quick flight.

We now have the ability to conduct business meetings from anywhere in the world and all the inflight entertainment we need on our phones. None of this was possible when Concorde was around.

Despite this, Starship might be a preferred transport method if the ticket price can match that of a business class ticket. The goal for any aircraft or rocket is to eventually pay off its purchase cost and break even.

For a typical aircraft, this usually happens around 5 to 10 years after it was purchased. Airplanes are expected to operate many years after this point and continue making a profit. But for an airplane, it’s not just the number of years that contribute towards its age, but how many pressure cycles it has gone through.

Every time an aircraft takes off, its cabin needs to be pressurized to make sure that everyone can breathe at high altitudes. This pressurization puts a considerable amount of stress on the airplane’s fuselage and wings.

Over time, this stress causes cracks to appear in the airplane, which will eventually become too dangerous to fly. Once the airplane has reached its maximum number of cycles, it has to be either scrapped or put through a costly amount of maintenance.

An Airbus A380, which typically has a lifespan of around 27 years, can make about 35,000 flights before being retired. Concorde was flown much less frequently, with an average number of flights at around 5,000.

The same ageing process happens with rockets. Starship is meant to be capable of hundreds of flights before any refurbishment is needed, but realistically, no one knows exactly how many cycles it will be capable of.

Although it’s unlikely to reach an airplane’s number of flights, it does have one advantage that sets it apart from Concorde or typical airplanes. The production cost for each Concorde was around 200 million dollars.

Once Starship is fully operational, the cost for a full Starship stack could be as low as 40 million dollars. This is because, in many ways, rockets are more simple to manufacture than airplanes.

The majority of the rocket is just a giant fuel tank with the engines taking up most of the cost. If SpaceX can reach its cost target for Starship, then it might be capable of breaking even much sooner than Concorde ever could.

In many ways, it seems like Starship could potentially get around the pitfalls that ended Concorde. And although the idea of rockets replacing airliners is currently just a dream, it’s important to remember that the same thing was once said about airplanes.

In the early 20th century, the only airplanes that existed looked like this and they were being built by crazy and ambitious engineers. As soon as money got involved, technology started to develop extremely quickly.

Engines became more advanced and the planes themselves started to grow larger and larger, allowing them to carry more people and more cargo. Fast forward to now and it’s easy to see how much things have improved.

Air travel is now one of the safest forms of transport and airplanes are capable of flying 9,000 miles whilst carrying 850 passengers at a time. We really have come a long way!

So although it’s unclear whether Starship will revolutionize how we travel around Earth, it’s incredible to be alive at a time when so much history is being made. In order for Starship to live up to its dreams, it will require a team of skilled engineers and technicians, just like the team that built Concorde back in the day.

Thanks for reading till the end. Comment what’s your opinion about this information “Is the idea of replacing airliners with rockets just a dream?”.

1 thought on “Is the idea of replacing airliners with rockets just a dream?”