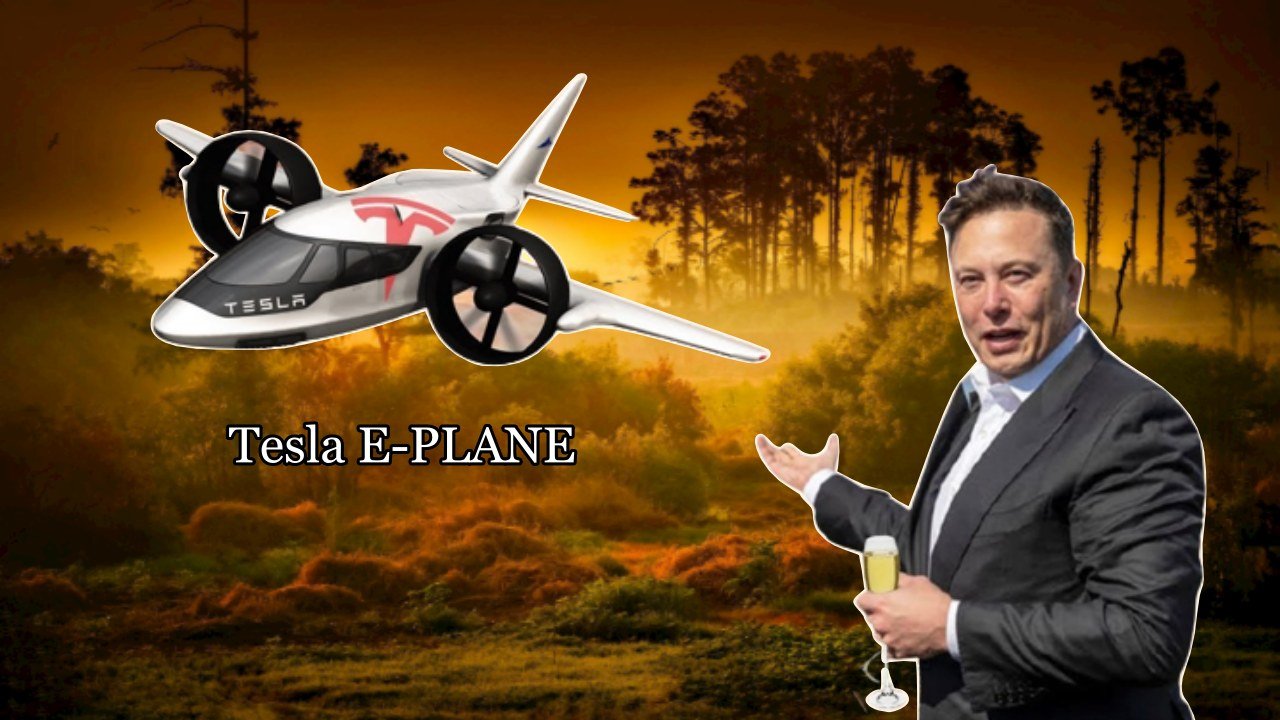 Elon Musk Unveils The Upcoming Tesla Electric Airplane: With the advent of electric vehicles and how clean and cost-saving it is, you can always expect every form of transportation will sooner or later become electric-powered, including airplanes. And one man you can expect to make that happen is none other than Elon Musk. In fact, he’s doing it already as it seems he’s already set to reveal Tesla electric airplane.

Elon Musk has stated that he is “desperate” to extend Tesla’s business beyond automobiles and trucks and construct an electric supersonic plane.

The planes would soar to a high height utilizing vertical take-off and landing (VTOL) technology before deploying battery-powered propulsion to achieve speeds of over 1,236 km/h (768mph).

The polymath billionaire claimed that his present workload is the only thing preventing him from developing the next-generation airplane. “I’m so dying to do a supersonic, electric VTOL jet, but adding more work will make my brain explode,” he tweeted on Thursday, using emojis for the final two words.

Musk has already stated his desire to construct an electric jet during one of his appearances on the Joe Rogan podcast and has previously described a proposal. “I have a design for a plane,” he said. “The exciting thing to do would be some kind of electric vertical takeoff and landing, supersonic jet.”

Two different propulsion systems would be used in the concept: one to lift the plane out of the crowd and into the sky, and the other to propel the ship onward at supersonic speeds. “The interesting thing about an electric plane is that you want to go as high as possible but you need a certain energy density in the battery pack because you have to overcome gravitational potential energy,” he said.

“The higher you go, the faster you will go for the same amount of energy. And at a certain altitude you can go supersonic with less energy-per-mile – quite a lot less energy per mile – than aircraft at 35,000 feet.”

For now. Musk’s ideas with a new mode of transportation dubbed the Hyperloop. He wrote a whitepaper for the 1,000kph vacuum tube pods because he couldn’t work on it himself, and other startups utilized it to construct their own versions.

Musk then supported competitions to promote its development, hoping that Hyperloop networks would provide an environmentally beneficial and more efficient alternative to flying. However, that’s not going to be an aircraft.

What’s Tesla going to be up against and what are they going to improve on from the past then? During the construction of the airship in the later part of the nineteenth century, the use of electricity for aviation propulsion was first experimented with.

Gaston Tissandier sailed the first electrically driven airship on October 8, 1883. Charles Renard and Arthur Krebs flew La France with a more powerful motor the next year. Even with an airship’s lifting capacity, the massive accumulators required to store the energy severely hampered the speed and range of early airships.

This rekindled interest in the creation of electric aircraft, albeit for unmanned use. It was later that true fixed-wing airplanes were developed. The Lange Antares 20E received the first certificate of airworthiness for an electric aircraft in 2003.

With a 42 kW (56 hp) DC/DC brushless motor and lithium-ion batteries, it can climb to 3,000 m (9,800 ft) with completely charged cells. A viable electric airliner is still some years away. However, Rolls-Royce inflamed headlines when they revealed the ‘Spirit of Innovation’.

This is an all-electric propeller aircraft The Spirit of Innovation averaged 555.9 km/h (345.4 mph) over 3 km and 532.1 km/h (330 mph) over 15 km in November 2021. The World Air Sports Federation has now confirmed both efforts, which took place at an experimental testing site, as world records.

The third attempt at a world record for the fastest climb to 3,000 meters, which took 202 seconds, is still being verified. It will break the current record by 60 seconds if it is authorized. The official record entry did not include a top speed of 387.4 mph (623 km/h), which would make it the fastest electric car ever.

The aircraft is powered by a 400kW electric motor, which is equivalent to a supercar with 535 horsepower. The propulsion battery pack was the most power-dense ever manufactured for a jet, according to Rolls-Royce, whose aerospace headquarters are near Derby.

It can charge 7,500 phones. Rolls Royce’s achievement is huge, there can be no doubt about it. However, it’s still an idea very much in its infancy. Among EV car companies, Tesla is THE leading power in battery capacity and power. None other can come close.

Tesla’s expertise in battery technology is probably why Elon Musk is so confidently dreaming of an electric airplane for the future. Other companies however are stepping up to take first dibs.

With the construction of two new electric-powered planes, a French aviation start-up is aiming to become the “Tesla of the skies.” Aura Aero is working on a two-seater jet that will hit the market in 2023, as well as a more ambitious inter-regional passenger plane that will take to the skies in 2027.

Toulouse, the company’s headquarters, is already home to Airbus, Europe’s largest aircraft manufacturer, and hence serves as the hub of the European aerospace sector. So, Elon Musk may consider moving quickly on the issue, unless he’s got something cooking that keeps his mind at ease.

Maybe an extremely powerful battery pack, unlike anything, ever seen? Who knows. Let’s take this chance to note that Elon Musk is interested in a concept design for a “Tesla Model V” electric airplane. The CEO commented on the design on Twitter in late 2020.

Tom Abbot-Davies, an industrial designer from the United Kingdom, came up with the idea. According to eVTOL News, the design is modeled on the appearance of a manta ray, although it can only transport one passenger.

“Looks pretty cool,” Musk wrote in response to a Twitter post from “blue_bnd” detailing the concept. It includes three ducted fans with titanium turbine blades that can fly vertically, with the rear fan on a gimbal for forwarding flight. To ensure a smoother flight, this is gyroscopically stabilized.

It contains three lithium-ion battery-powered motors: a 1,250-kilowatt rear motor and dual 650-kilowatt brushless motors with rotor blades. All of this adds up to dispersed electric propulsion, which means the plane can land safely even if one part fails.

The retractable landing gear is buried beneath a carbon fiber underbody on the outside. It has a magnesium fuselage, a titanium shell, and a large canopy that can accommodate two passengers. Abbot-Davies began working on this project in 2014.

In 2017, while at Loughborough University, he resumed the design work, using Solid Works and Keyshot to create the designs. In 2019, Abbot-Davies received his bachelor’s degree from the university and completed graduation.

Although Musk praised the design on Thursday, Abbot-Davies had previously submitted it as part of his application for a Tesla internship, which he was unsuccessful in getting. Life is full of uncertainties and ups and downs too, so we hope Tom Abbot-Davies can eventually make it big following his dreams.

As for Tesla and Elon Musk, we should probably wait a little while as the company is still quite busy completing its line of offerings.

We cannot expect any official news on a Tesla plane until the Cybetruck and the new $25,000 vehicle are both released.

Thanks for reading till the end. Comment what’s your opinion about this information “Elon Musk Unveils The Upcoming Tesla Electric Airplane“.