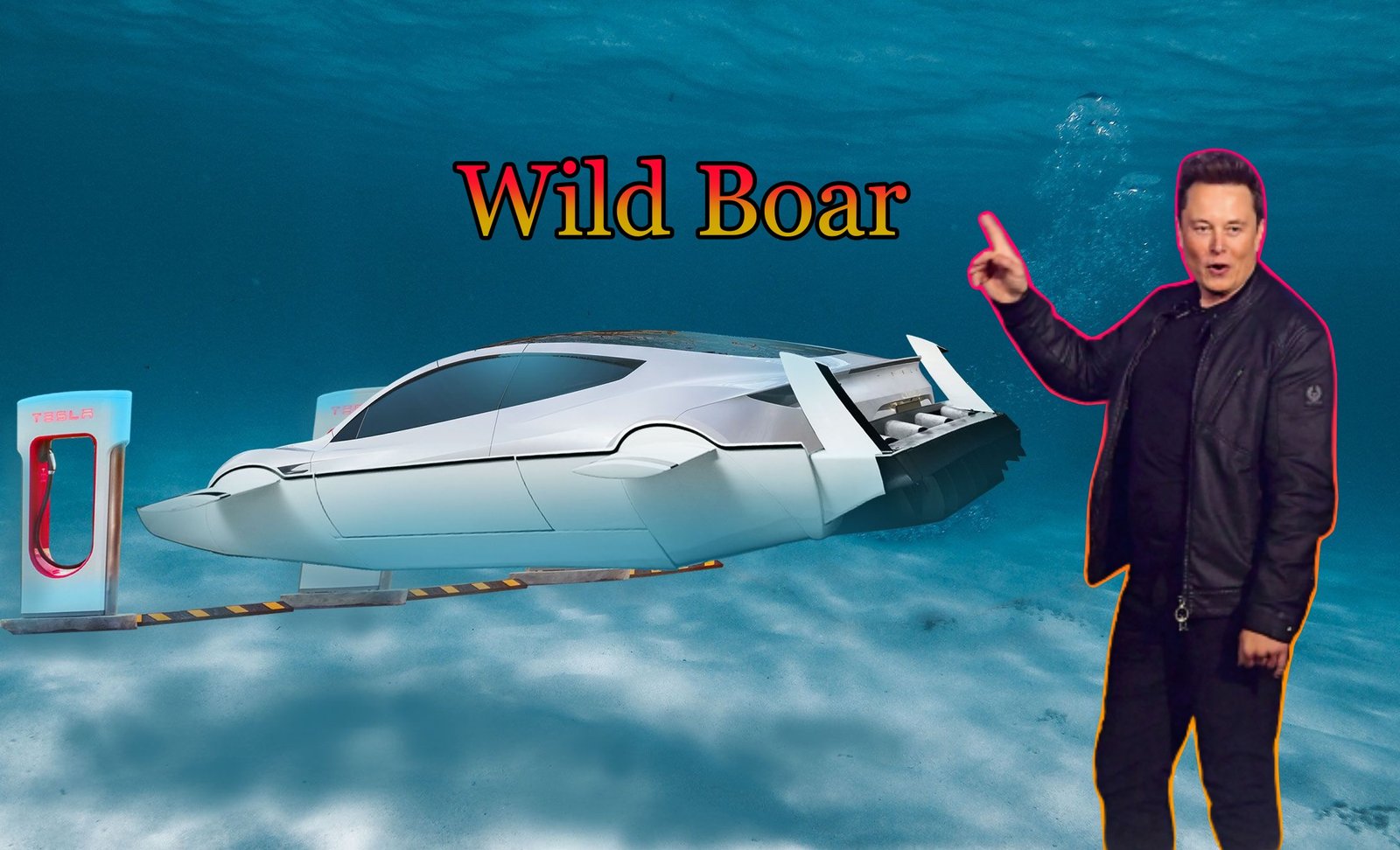 Elon Musk Unveils New Underwater Vehicle: In 2018, a Thai soccer team got trapped in a flooded cave. The world was captivated by this incident and kept amassing efforts to get these kids out. The billionaire inventor Elon Musk heard about the incident and decided that something had to be done to save the team and their coach.

So, as rescuers embarked on a daring rescue mission to get these people out, Musk announced that he had sent a kid-sized submarine to help with the rescue effort.

When the news broke out that the tech billionaire was working on a child-sized submarine to aid in the rescue of these children trapped in Thailand’s Tham Luang Cave, it seemed like something most people interested in tech would love to cover. But, it begs the question: is Musk really working on a propulsion submarine? Let’s find out!

Musk has his fingers in everything tech, from creating superfast electric cars to building rockets to carry humankind to Mars. Musk has decided that he will be applying some of that technical expertise to save the lives of little kids in danger.

All that talk about Elon Musk being a real-life Tony Stark seems to be becoming true after all. With human lives in the balance, success was not guaranteed, even with the involvement of Elon Musk.

The rescue effort was dangerous, and one of the rescuers, a Thai Navy Sergeant, Saman Jinan, an ex-SEAL, lost his life from a lack of oxygen while attempting to place air tanks in the cave complex. In the end, all thirteen lives were spared.

Many people said that it couldn’t be done; some mentioned that it would be a miracle if half the number of children were saved. Musk didn’t let all these naysayers deter him. He designed and built the submarine at record speed and ensured it was delivered to Thailand while some children were awaiting rescue.

Musk’s submarine didn’t make all the difference, but with the element of human tenacity, everyone was saved. As some of the world’s best rescuers battled to save the 12 boys and their soccer coach, Musk imagined that a Kid-sized submarine might be of help.

In the end, the rescuers didn’t need the kid-sized submarine, but Musk let the machine there just in case it would be useful in the future. Eight of the soccer teammates were evacuated from the flooded cave earlier. The youngsters were guided through water-filled corridors.

It was a difficult task, inserting air canisters on a path within the cave being used in the rescue mission. A former Thai Navy SEAL lost consciousness and died. When the remaining fours boys, their soccer coach, and military personnel were rescued, the mission was declared a success.

Thai officials stated on Facebook that Musk’s mini-submarine idea was put on hold after 18 days, dozens of dives, and hundreds of volunteers. Musk was present at the event; he tweeted early on Tuesday local time that he had just returned from a vast cavern in the Tham Luang Cave complex after dropping off the hastily made mini-submarine.

Musk explained how it was constructed, mentioning that it was made with rocket parts. Musk left the mini-submarine there anyway, just in case anyone would need to use it again in the future. But we hope such a scenario never presents itself again.

Now that all the children have been rescued and are already in their homes, we wonder what happened to Musk’s submarine. Is it possible that it would have worked if he weren’t under time pressure? Let’s see for ourselves. We’ll start by talking about everything we know about the tech billionaire’s invention.

Musk’s invention was named the “Wild Boar,” after the trapped children’s soccer team. If we are to be frank, the craft isn’t big enough to be called a submarine. But since it goes underwater, what else could we have called it?

The Wild Boar is a sealed tube that divers could easily pull along the cave system in more simple terms. It has no propulsion, and there are no systems to control the craft actively. Ballast is provided using the diver’s weight belts, and it would be added and subtracted, depending on the occupant’s weight.

The hull of the mini-submarine is a five-foot-long section of the liquid oxygen (LOX) transfer tube. The same one was used in the Falcon 9 rocket.

For those who don’t know anything about Orbital Masters 101, the transfer tube moves supercooled LOX from its tank at the top of the rocket’s first stage, down to the fuel tank positioned at the lower section of the stage, and into the manifold that distributes the fuel to the nine Merlin engines in the rocket.

The LOX, which has been chilled to a temperature of minus 207 degrees Celsius, moves through the tube at a rate of roughly 380 US gallons per second. The LOX transfer tube is strong and durable; it is also exceptionally large.

Since it’s a component meant for a rocket, it was designed to be lightweight. Musk backed up this fact by stating the weight of the Wild Boar, which weighed just 90 pounds. It was important for the Wild Boar to be lightweight because not all parts of the cave were flooded, and at some point, the rescuers would have had to drag or carry it.

The wild boar had a front-end capped with a nose cone to protect the attachment point for airlines. This part is new and was probably fabricated on short notice by using the same spin forming technique employed by SpaceX for manufacturing the exhaust nozzles for its Merlin engines.

Apart from protecting the airlines, the pointed nose will make it easier for the Wild Boar to be guided through the narrow passageways in the cave. It will glance off obstructions instead of getting stuck. The rear hatch of the Wild Boar was made using an acrylic disc, which was held on with eight thumb screws and sealed using an O-ring.

Musk says that it was made to be transparent, so the divers could see the head of the occupant, ascertain life, and probably communicate using hand signals. The internal workings of the Wild Boar are harder to describe. The development and construction were rapid, so there wasn’t time to talk about all of that.

But, Musk did mention that the Wild Boar will have everything from neoprene insulation to a sound system, so the occupant can listen to music throughout the journey. Trust Musk to always add a fun element to his inventions.

It is unclear if the Wild Boar had any of these luxuries since human lives were at stake, the hurry was to save the lives of these boys, and luxury or comfort wasn’t a priority. The design of the Wild Boar is unique and straightforward, and there is no doubt about it comfortably holding a tiny human underwater.

Before it was transported to Thailand, it underwent at least one test drive. Several new organizations dismissed the Wild Boar, saying it wasn’t practical for the task at hand. The biggest issue was the size; the wild boar was too big to get to the stranded kids.

Its circumference was only two inches smaller than the width of the cave. The length and stiff construction of the Wild Boar will make it difficult to maneuver in some tight turns. The consequences would have been disastrous if it got stuck and blocked the route to reach the trapped kids.

There is also another limitation to this invention. Many people thought that even if the Wild Boar had gotten to the kids safely, would the kids be able to remain calm in what is essentially a metal Coffin after the mental and physical stress they had gone through?

They would have had to endure a five-hour journey before getting to the surface in that metal can. Some children suggested that the children would need to move around, and the Wild Boar did not possess such qualities.

Musk maintained that he was in contact with divers that had first-hand experience of the Tham Luang Cave throughout the design and construction of the Wild Boar. He believed that if the government had not set it aside, it would have reached the children and helped in saving lives.

Musk has personally stated that he would personally return to the Tham Luang Cave and demonstrate that the Wild Boar could have reached the children. But the message has since been deleted from Twitter.

Every child and the coach were saved without using the Wild Boar, rendering the invention useless. Deploying the wild boar could have posed hazards to the children and divers, worsening matters. But whether those risks would have been worth taking is arguable.

If the youngsters had been too feeble to make it out of the cave or the rains had continued, things might have been different. But since the Wild Boar didn’t see any action, we’ll never know. The Wild Boar might have a simple design and is a sincere gesture from the billionaire.

Still, it seemed too complicated for its purpose, and its associated risks made it harder to deploy. Submarines operate in a very different way. They require air and fuel to operate and have to resurface from time to time, making them more visible.

Submarines are much quieter in electric mode than when their diesel engines function. Most submarines these days are diesel-electric or conventionally powered and less expensive to maintain. Nuclear-powered submarines use steam generated by an onboard reactor to drive their turbines.

Nuclear-powered submarines can stay submerged for years because of their endless energy supply. They only have to resurface to resupply the food and water of their crew. These submarines are larger and require more costly infrastructure and maintenance, but they are the true prowlers beneath the waves.

Thanks for reading till the end. Comment what’s your opinion about this information “Elon Musk Unveils New Underwater Vehicle“.