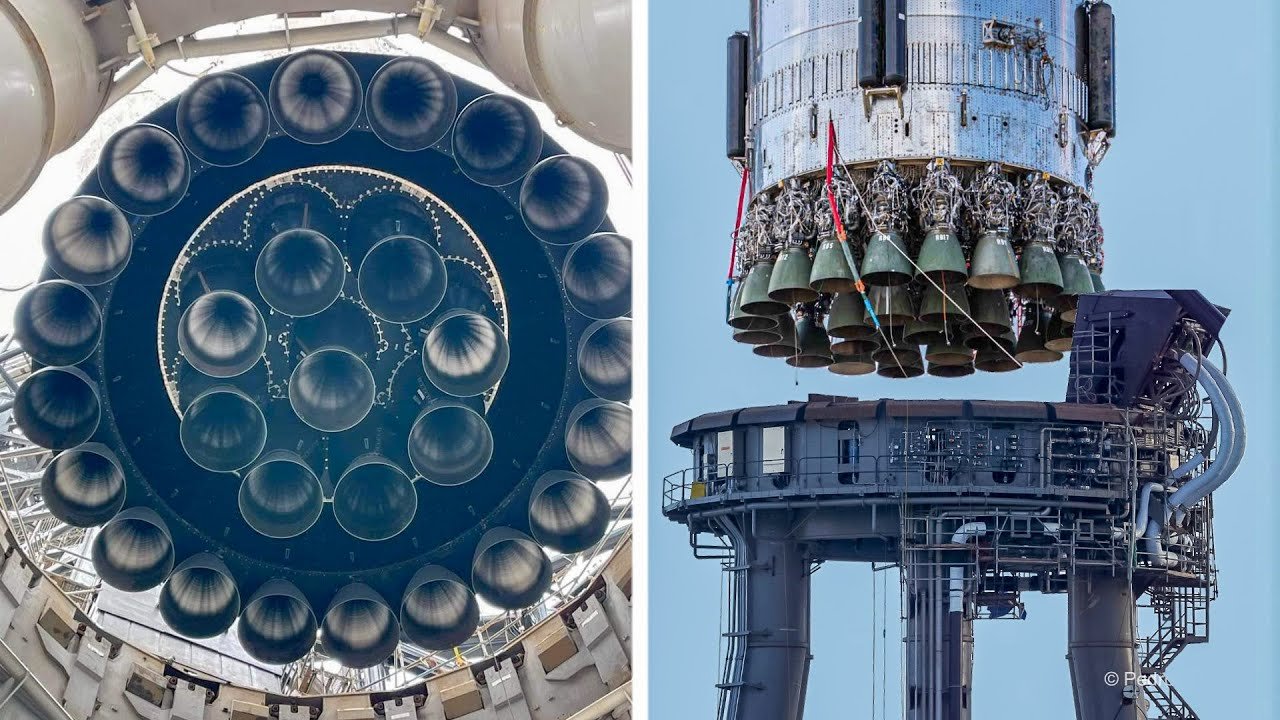 How SpaceX Will Test Super Heavy 29 Raptor Engine Simultaneously!: SpaceX’s Starship launch vehicle has many potential uses and capabilities that will enable companies and organizations to access space like never before. Engineers are developing the fully-reusable Starship launch system at the Starbase facility located in Boca Chica Beach, Texas.

Super Heavy is designed to propel Starship to orbit, powered by up to 29 methane-fueled Raptor engines. It is set to become the world’s most powerful and largest rocket in history! On the 4th of June 2010, SpaceX launched the Falcon 9 rocket for the very first time. This would go on to be one of the most revolutionary rockets in the history of spaceflight – and its first launch went off perfectly.

Now, with Starship aiming to perform its first orbital launch later this year, SpaceX is once again attempting to create history. But in order for this first test flight to be a success, SpaceX has to be sure that the 29 raptor engines on the bottom of Super Heavy will fire without any significant problems.

So far, SpaceX has only performed a few pressure tests on Booster 4, their most complete Super Heavy booster. These tests usually involve filling the booster’s tanks with cryogenic liquid, to simulate the temperatures and pressures it will experience during a flight. But the most realistic test that needs to be completed before Booster 4 ever lifts off will be a complete static fire using all 29 of its engines.

In order to limit the size of the explosion if things go wrong, SpaceX will only fill up Booster 4 with as much methane as it needs for the static fire. For a typical 3 second static fire, the booster would only need about 14 tons of liquid methane and 50 tons of liquid oxygen.

However, it makes sense to significantly overfill the liquid oxygen tank since it weighs the vehicle down without making the potential fireball any worse. Although the Raptor engines have become much more reliable, this test will be on a completely different scale to anything SpaceX has done before.

So, they will start by doing smaller static fires with just a few engines and then build-up to the full 29. When Booster 4 lights up all 29 of its engines, it will produce a level of thrust 7 times greater than the Falcon 9. And this number is set to increase as the Raptor engine is upgraded.

The only other rocket that comes close to this is the Soviet N1 rocket. It was a similar size to Starship and also featured a similar layout of 30 engines. But sadly, it only performed 4 launches, all of which ended in failure.

Many of the failures were caused by explosive engines which led to a chain of other problems during launch. With much more advanced computer systems now, SpaceX will hopefully be able to shut down a failing engine before it turns into a grenade.

The engine problems on the N1 were never discovered prior to launch because the Soviets didn’t have a large enough testing facility to static fire the massive N1’s first stage. This is a problem that SpaceX is hoping to solve with its Boca Chica facility. But it’s not just the rocket itself that could cause problems during a static fire.

The entire launch infrastructure surrounding the rocket plays a crucial role in keeping the rocket safe. Normally, launch pads use a flame diverter to deflect the intense exhaust away from the rocket and the launch pad. But SpaceX is taking a much riskier approach with Starship.

The current design of the orbital launch pad in Boca Chica features no flame diverter at all and the booster sits just 20 meters above the ground. And so, when the engines fire, an enormous amount of heat and energy is sent directly onto the concrete below.

In the past, this has caused problems for SpaceX, with large chunks of concrete being thrown back up into the engine bay, completely destroying engines. In order to avoid this, SpaceX covers the concrete in an ablative coating called Martyte.

This protects the concrete and stops it from breaking up and flying into the engine bay. The orbital launch pad will also feature a large water deluge system that sprays water directly below the engines.

Despite the common misconception, the water isn’t just there to reduce the heat. Its main goal is to reduce the sound energy created by the engines, which can be extremely damaging to both the rocket and the launch pad.

Another factor that SpaceX has to consider is the sheer amount of load on the vehicle when all 29 engines fire up. The thrust puck at the bottom of the booster is designed to transfer all of the force from the engines onto the walls of the booster.

In order to gradually ramp-up to full power, the engine ignition will be staggered. This is something that SpaceX already does on both the Falcon 9 and Falcon Heavy rockets. On the Falcon 9, opposing engines are lit in pairs, 150 milliseconds apart, meaning the rocket reaches full power in just half a second.

For Super Heavy, a similar ignition sequence would take around 2 seconds to light each engine. Part of the reason for having so many engines instead of just a few larger engines is redundancy. If multiple engines shut down during a launch or landing, it won’t mean the rocket is destroyed, since the other engines can turn on or throttle up to compensate for the loss of thrust.

This is a philosophy that Falcon 9 also employs. During a Starlink launch last year, a Merlin engine shut down during launch but the Falcon 9 still managed to get its payload into the correct orbit. This did however affect the booster landing since the engine that failed wasn’t able to slow the vehicle down for the landing.

On Falcon 9, only 3 engines are able to perform the landing burn, so there is nothing they can do if one fails to light. But since Super Heavy has way more engines than the Falcon 9, it will give it a much wider throttle range, allowing it to hover.

This is especially crucial for Super Heavy since it’s designed to be caught out of the sky instead of actually landing. These are all important milestones that won’t be reached successfully unless SpaceX performs multiple full static fires.

No matter what happens during the first full static fire of Super Heavy, it’s guaranteed to be extremely exciting. If everything goes perfectly, it should pave the way for Starship to make its very first orbital launch later this year.

Either way, it’s amazing to think about all of the incredible engineerings that has gone into making not just the most advanced rocket engine ever made but also the enormous structures that sit on top of them. During an update on the SpaceX Starship program, Elon Musk just showed off a brief clip that explained part of the plan for using these vehicles to reach Mars.

It involved a Starship in orbit around Earth, meeting a similarly-sized vehicle to refuel before it goes on the long trip to another planet. Musk has long touted his desire to make human life “multi-planetary” and expressed this as the way to achieve his goal.

He explained the Starship only requires its “Super Heavy” booster for launches from Earth, so it seems possible that the second vehicle could launch from the Moon powered only by its own Raptor engines. Starship will be a versatile launch vehicle that will revolutionize space exploration.

Some of SpaceX’s plans for Starship and potential uses include: Starship will be a cost-effective option to deploy payload. With a single launch, a Starlink broadband fleet of 400 satellites can be launched to orbit.

Researchers might also use Starship launch services to deploy a fleet of satellites that feature advanced Earth-observation technology that could enable researchers to study climate change, monitor weather, among other applications.

Thanks for reading till the end. Comment what’s your opinion about this information “How SpaceX Will Test Super Heavy 29 Raptor Engine Simultaneously!“.