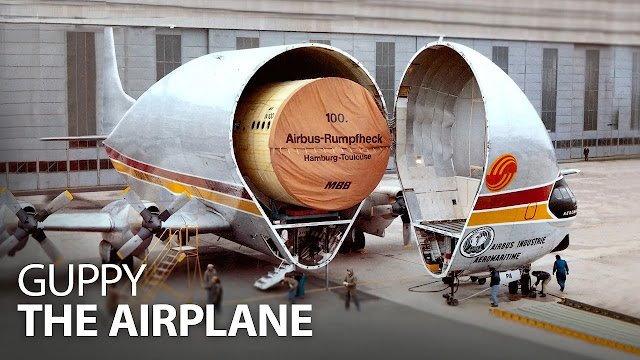 Secret Weapon of Nasa – The Super Guppy: On July 16, 1969, the Saturn 5 rocket left Earth – carrying the Apollo 11 crew to the Moon. This massive rocket was crucial to achieving President Kennedy’s goal of landing a man on the Moon by the end of the decade.

But without the help of an incredibly unique aircraft, the golden moment of the Apollo program could not have happened in time. The aircraft in question was called the Guppy.

In the early ’60s, NASA was working on the Gemini project—a series of crewed spacecraft missions that would demonstrate the technologies needed to get to the Moon. As the decade passed, NASA found itself working on much larger rockets.

With the giant Saturn 5 rocket taking shape, it was clear that getting these massive rocket parts to the launch site was going to be an enormous challenge.

Although the Saturn 5 was launched from Florida, many parts of the rocket were built by various companies across the United States. Each stage was too large to be transported by truck or train – so the only option was to send them on a barge.

For some stages, this involved a 20-day trip around Mexico via the Panama Canal—not ideal for an event that was already under extreme time pressure. At the same time, American airlines were replacing their Boeing 377 Stratocruisers with more modern jet-engined airliners.

Ex-Air Force pilot John Conroy was aware of NASA’s transportation problems and saw it as an opportunity. He bought two Stratocruisers from an aircraft broker and began converting them with his new company, Aero Spacelines.

He began by cutting one Strat cruiser in half and inserting a section from another Strat cruiser to lengthen the vehicle by 5 meters. Then, in order to increase the size of the cargo bay, he built a new fuselage with a diameter of 6 m above the aircraft.

Despite the new fuselage, the Guppy weighed only 1.3 tons more than the original aircraft from which it was built. However, the huge new size caused a significant amount of drag and the aircraft could only fly at 360 km/h.

NASA was very skeptical that the plane might even leave the ground – let alone carrying its huge rocket parts across the country. So, Conroy flew to NASA’s Spaceflight Center in Houston to give Guppy a performance.

After showing the plane’s ability to fly safely, NASA was impressed and immediately hired the Guppy. The aircraft began transporting components for the Gemini program, reducing the 20-day journey to just 18 hours.

As the Apollo program began to develop, NASA was under great pressure to assemble and launch the first Saturn 5 rocket—but the telltale flaws were starting to show. To load cargo into the aircraft, the entire rear of the aircraft had to be opened and wheeled away.

The cargo bay was not pressurized, meaning that some payloads could not fly on the aircraft due to pressure changes during flight. But when it came time to assemble the giant Saturn 5, the Guppy wasn’t massive enough to carry the third stage, which was urgently needed for the first flight test.

NASA went back to Conroy and asked his company to build a new plane. And so they created – Super Guppy. This time, the aircraft was built using a military Stratocruiser that was lengthened an additional 10 meters.

The diameter of the new fuselage was 7.6 m, which was significantly wider than the previous version. The new cargo bay was also fully pressurized, allowing more payloads to be carried.

This larger version of the aircraft was now capable of carrying sections of the Saturn 5 rocket, including the third stage and the all-important instrument unit. The first Saturn 5 launch was scheduled for 1967 and despite some stages being a year behind schedule, the Super Guppy delivered many of its payloads compared to those traveling by ship a year earlier.

In November of 1967, less than two years before Apollo 11 landed on the Moon, the first Saturn 5 landed from Kennedy Space Center.

Over the next few years, the Guppy flew more than a million kilometers—carrying vast sections of fragile rocketry for the Gemini and Apollo programs. Without Guppy, NASA’s months — perhaps months — of transporting and assembling the Saturn 5 rocket would have been behind the times.

In a program that was heavily delayed, Apollo 11 achieved Kennedy’s goal with only 5 months of standby time. Over the next few years, several variations of the Guppy were produced to meet NASA’s transportation needs.

This fleet continued to support NASA during the Skylab program in the 70s and the International Space Station program in the late 90s. Despite being an aircraft from the ’60s, NASA still uses the Guppy to transport most of its components today.

After playing a role in one of humanity’s greatest achievements, the Guppy inspired a new breed of aircraft such as the Airbus Beluga that could carry the entire aircraft fuselage in its cargo bay.

Although many cargo planes have surpassed the Guppy in terms of capability, it will forever be remembered as the plane that saved the Apollo program.

Its distinctive design came at a time when engineers were pushing the limits of their imagination to achieve an impossible goal.

Thanks for reading till the end. Comment what’s your opinion about this information “Secret Weapon of Nasa – The Super Guppy“.

1 thought on “Secret Weapon of Nasa – The Super Guppy”