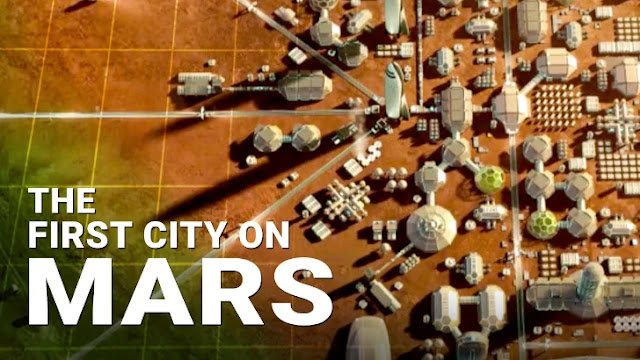 The First City On Mars – How is SpaceX Gonna Build It?: In 2024, SpaceX aims to send the first humans on a 6-month journey to Mars. This journey will be the beginning of Elon Musk’s goal of making life a multi-planetary species.

To achieve this, SpaceX will need to establish the first Martian base and — overtime — the first Martian city. Using its Starship rocket, thousands of people will be able to travel to Mars and lay the foundation for the first human civilization outside Earth. But how would the first astronauts set up a base on Mars? And what laws will they follow?

In this article, we’re going to look at what it takes to build a self-sustaining city on Mars. We’re also going to look at how the Martians would create their own laws to develop the first settlements into thriving cities.

When the first astronauts reach Mars, they will need a place to live. Since the Martian surface is exposed to much more radiation than Earth, the first Martian habitats will most likely be built underground.

More sophisticated habitats can be built above ground with a thick layer of water to absorb most of the radiation. However, it would be extremely costly to transport huge amounts of water and materials to build these dwellings.

If the first Martian habitats are to be developed in large cities, settlers would need to use local materials found on Mars. Fortunately, Mars has a large number of useful resources.

The planet’s surface contains metals such as iron, magnesium, and aluminum, while the power can be harnessed from the Sun. Oxygen is present in the planet’s atmosphere and the ice buried beneath the surface could supply all the water needed.

But once the Martians start mining these materials for their own use, who owns them? In 1967, the US, Britain, and the Soviet Union all signed the Outer Space Treaty.

The treaty claims that no nation can claim ownership of space or a celestial body. It would therefore be the sole responsibility of the settlers of Mars to establish and enforce the rules.

But if history tells us anything, it’s that building a new colony is anything but easy. In May 1607, 104 men set foot on Jamestown. As of January, only 38 of these natives were still alive.

Many of these people died of disease and famine, while others died from poisoned water and tribal warfare. If building a new settlement on Earth was difficult enough, it’s safe to assume that building one on another planet would be even more difficult.

To avoid conflicts over resources, settlers could agree to establish an economy before arriving on Mars. This economy can be based either on the trade of local resources or on a new currency, independent of anything we have here on Earth.

For this economy to be fair and balanced, it would need to be implemented – either by a group or by one person in charge of everything. Settlers may perhaps learn from the mistakes they have made on Earth in order to build a better system for running a city or country.

“I think most likely, the form of government on Mars will be a direct democracy, not representative. So these people will vote directly on the issues.

Indirect versus representative democracy, the possibility of corruption is reduced to a great extent. It should probably be easier to repeal a law than it is to make a law.

My recommendation would be something like let’s say – 60% of the people are required to vote in the law but at any given time more than 40% of the people can remove it. And any law must come with an implicit sunset provision.” Elon Musk said.

This would help in maintaining the laws relevant to the current progress of civilization. After 5 or 10 years, Martians can vote if they want to pass a certain law or get rid of it. Another problem is the potential threat of war.

The first settlers may face extreme scarcity of resources if the systems for mining water and growing food are not working. Even if they have sufficient resources, the mental struggle to live so far from home and the Martian lifestyle may put some settlers on edge.

As more settlers begin to arrive on Mars, they may establish different regions, countries, or continents. And without the authority of the police in these different places – the varying levels of progress between civilizations could lead to chaos.

These are just some of the considerations and problems that will need to be addressed in order to establish a permanent colony. So although Mars may not seem like a place to raise your children, imagine the first generation of children born on Mars.

Mars is home for them. Underground dwellings, dust storms, and domestic food are all used to. To them, the Earth is a small alien world floating in the sky.

Thanks for reading till the end. Comment what’s your opinion about this information “The First City On Mars – How is SpaceX Gonna Build It?“.

2 thoughts on “The First City On Mars – How is SpaceX Gonna Build It?”