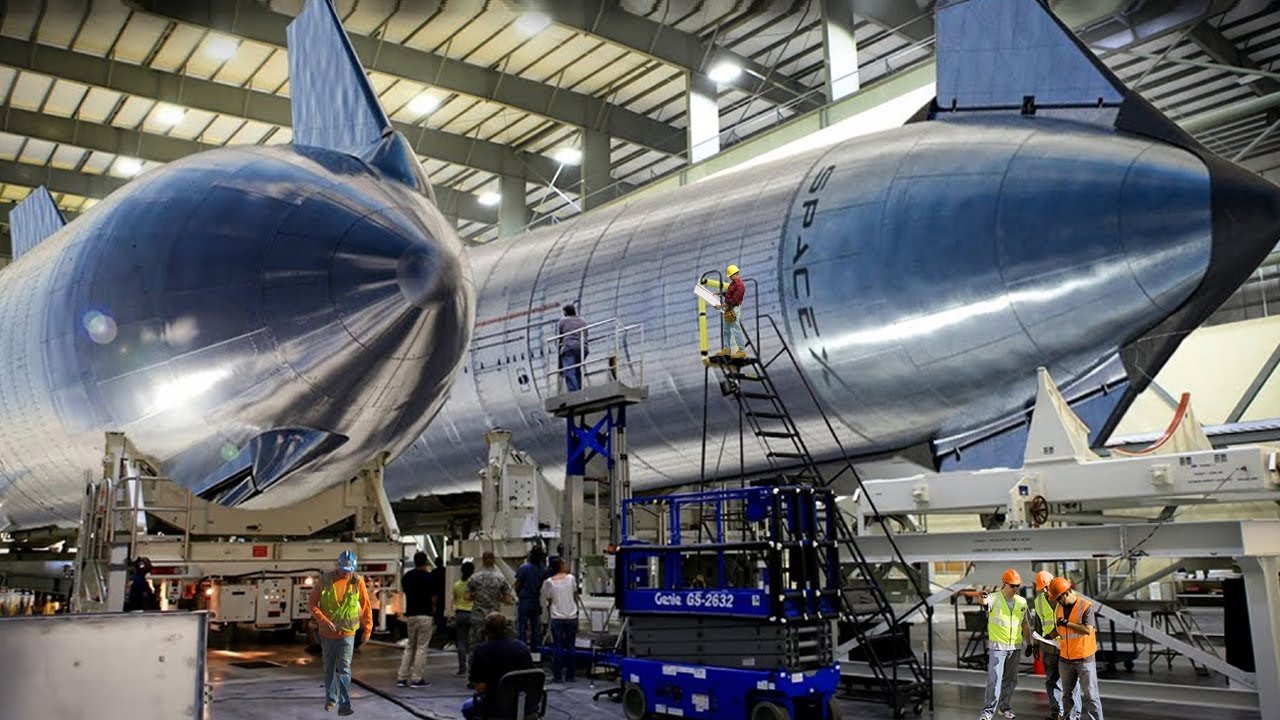 Inside SpaceX New $7 Billion Starship Factory: Many people know about the powerful Starship rocket that SpaceX is building to support Musk’s ambition to turn Mars into a planet habited by humans. However, many don’t know about the massive factory where the company is developing the Starship! What does it look like?

The community is near the SpaceX South Texas launch site, and the company has its sights set on significantly growing its presence there. If SpaceX were to move in, takeover, and rename the town, it could turn Boca Chica into the 21st century’s Cape Canaveral.

In 2012, SpaceX chose Boca Chica, Texas. But why exactly did Musk choose to set up Starbase in Texas? There are several reasons, and one of them has to do with road sizes! SpaceX designed the Falcon 9 from the ground up so that it is transportable by US interstates.

The Falcon 9 diameter is 12 ft because US freeways lanes are 12 ft wide. SpaceX develops all its rocket parts at Hawthorne, California, including the rocket engines.

As you can guess, Falcon 9’s length and diameter are mostly constrained by the US interstates’ lane width and underpass height. But SpaceX’s ultimate goal was not to make this rocket. Their ultimate goal is to build a Mars rocket that you already know as the Starship!

It currently has lease agreements and pays millions of dollars monthly to the US government. Musk knew that if SpaceX owned a launch site, it would save them a lot of money. That’s why they started to look for a location for a rocket manufacturing and launch facility.

According to Elon Musk, occasional flights from land are okay, but frequent flights must be from the ocean and at least 30 km or 18mile away from shore, primarily because of the noise. Therefore, a launch facility must be near shorelines and must have roads.

The launch site also needs to be near the rocket factory. Otherwise, transporting the rockets would be a massive cost burden. Also, the East coast is best for a rocket launch into most orbits. It’s because if a rocket launches into the east, it can take advantage of the Earth’s rotation and save energy!

Moreover, the FAA will never allow launching a rocket over land in the US, unlike in China or Russia. So, SpaceX will never be able to launch except for polar and sun- synchronous orbit from California. Moreover, Texas offered SpaceX tax rebates. Musk likes tax rebates.

Also, Texas does not have a state income tax. Furthermore, Boca Chica is mostly inhabited. While developing the Starship, SpaceX realized its operations would significantly create a safety hazard for the village residents. So Musk did the only reasonable thing; buy the entire community!

So, what has SpaceX built in Boca Chica, which Musk is trying to rename Starbase? The facility is made of two distinct parts; the launch site and the manufacturing section. Both are actually separated. The former consists of different components.

The tank farm consists of one water tank and seven tanks for other commodities. There are three LOX or Liquid Oxygen tanks, two Liquid Methane tanks, and two Liquid Nitrogen tanks. There are also two horizontal methane tanks to the side of the main tank farm; their exact size is not known.

The water tank is just a large cylinder made up of rings of stainless steel. The other seven tanks are double-walled with insulation between them since they need to hold liquids at cryogenic temperatures.

The inner tanks are built nearly the same way SpaceX makes their 9-meter diameter ship and booster tanks using rolls of 304L Stainless steel. These tanks need to be able to withstand constant pressurization and depressurization over their lifespan, so they have extra reinforcement.

The outer shells, which are 12 meters wide, are made up of stainless steel rings and painted white for thermal and corrosion protection. To insulate the inner tanks and keep the cryogenic liquids at just below boiling point, the space between the tank and shell is filled with Perlite insulation.

The entire rocket needs about 1,040 metric tons of CH4 and 3,760 metric tons of LOX. With these rough estimates, the orbital tank farm has enough propellant for just one orbital launch with a margin left over for possible recycling.

The approximately 2,710 metric tons of Liquid Nitrogen allow SpaceX to fully cryo test a booster. The propellants in these tanks will flow through subcoolers next to the tank farm to super-chill the propellants.

There is also the launch mount where the full Starship stack will sit before launch. It must be able to withstand at least 74.4 MN of thrust, based on the 33 Raptor 2 engine booster configuration.

The mount includes important components such as the hold- down clamps, the quick disconnect for the booster, and the water deluge system for sound suppression. The launch table has 20 separate hold-down clamps that attach to the bottom of the booster for static fires and launches from the orbital pad.

For launches, these hold-down clamps will release once all the engines on the booster are at nominal thrust. To fuel the booster before liftoff, the launch table needs a quick disconnect mount, which is on the top of the table and will disconnect from the booster around T-0.

The QD will help provide the booster with CH4, LOX, and Helium and supply external power before launch. The water deluge system will spray water onto the bottom of the launch mount and on the ground to help lessen the sound waves of 29 and eventually 33 raptors firing at full thrust so that the sound waves do not damage the rocket or the pad.

Another component is the integration tower which has a unique piece of hardware. Mechazilla, as named by Elon Musk, is about 145 meters tall and has the job of not only stacking the booster and Starship but also catching them as they come in for landings.

Mechazilla will do this using two arms that will lift or catch the booster from hardpoints between the grid fins. The Starship is lifted or caught from hardpoints right under the forward flaps.

The arms attach to a carriage that connects to the tower on the column just under the pulley at the top of the tower and wrap around the two side columns for extra support.

In order to be able to move up and down the tower easily, there are bearing skates that the carriage attaches to on the sides of each column on the top and bottom. The QD arm will supply the ship with methane, LOX, Helium, and external power before launch.

The QD arm has a single actuation point connected to the tower and allows the arm to move during launch and catch operations. The extension has a claw setup similar to the top of the Falcon 9 strongback. This claw setup will hook up to the booster for stabilization. Let’s hear what you think of the Starbase facility in the comment section below!

Thanks for reading till the end. Comment what’s your opinion about this information “Inside SpaceX New $7 Billion Starship Factory“.