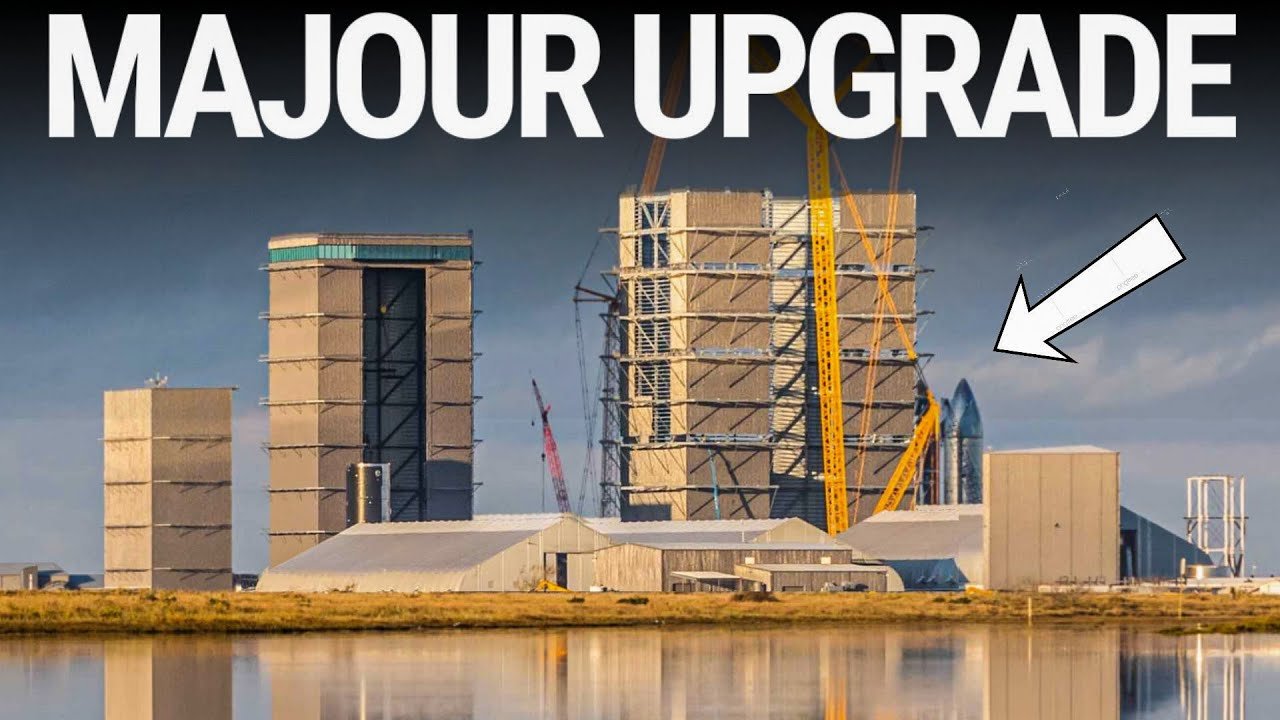 SpaceX Starbase Factory Prepare For MAJOR Upgrade: In what is probably a sign of things to come for SpaceX’s nascent Florida Starship factory, the company’s original Starbase facility in South Texas may be about to graduate from tents to more permanent buildings.

More than two years ago, in late 2019, SpaceX followed in the footsteps of Tesla and began constructing a surprisingly advanced factory out of a series of tents. Instead of Model 3s, though, SpaceX would be building and assembling sections of the largest and most powerful rocket ever built.

Instead of heavily leaning on horizontal integration (meaning that the rockets are primarily assembled in a horizontal orientation), Starship and its Super Heavy booster are almost exclusively assembled vertically.

Excluding the machining of major loadbearing structures, Starship manufacturing generally begins with giant rolls of thin (3-4mm or ~0.15 in) stainless steel. SpaceX uses a custom tool to unspool the sheet metal, cuts off a roughly 28-meter (~92 ft) long strip, and then welds the ends of that strip together to produce a cylindrical barrel.

Repeat that process 57 times and you end up with enough rings to assemble a full Super Heavy booster and most of a Starship. However, using increasingly custom tools, SpaceX first stacks and welds those individual rings together to form sections of two, three, four, or five.

Each section is then prepared for its specific role with a range of cutouts, plumbing, reinforcements (vertical stringers or circumferential stiffeners), thrust structures (the plates that Raptor engines attach to), and other add-ons.

Most importantly, certain stacks of rings are mated with large steel domes – welded together out of prefabricated steel plates – to form forward, common, and aft dome sections. For Starship, SpaceX also assembles the ship’s conical nose section in a similar manner.

Virtually all ring, dome, and nose assembly work is conducted in one of three massive tents – each about 114m x 35m (375′ x 110′) – that form the backbone of Starbase’s Starship factory.

Finally, SpaceX has built a series of massive open-air bays where, once fully outfitted, each ship and booster section is stacked in a specific order and welded together to complete the basic structures of Starship and Super Heavy.

While SpaceX continues to speed towards the completion of Starbase’s largest and tallest Starship assembly bay yet, the latest news centers around Starbase’s tents. After physically relocating a smaller but still substantial tent believed to be used basic metalwork (laser/water cutting, presses, etc.), SpaceX has rapidly broken ground and partially completed the foundation of a massive, new building believed to be the start of an upgraded Starship factory.

According to RGV Aerial Photography, SpaceX isn’t merely expanding the main three-tent factory with a fourth larger, permanent building. Instead, it reportedly aims to replace all of Starbase’s tents with a single 300,000-square-foot (~28,000 square meter) building that will be about 18 meters (60 ft) tall and likely measure around 800 feet (250m) long and 400 feet (120m) wide.

In comparison, a 300,000 square-foot building would have almost two and half times as much covered floor space as Starbase’s three tents – all of which can theoretically be used for ring and nose section assembly.

In fact, with a mostly flat 18-meter roof, SpaceX could feasibly expand most ‘stacks’ by a ring or two, which would reduce the number of sections (and thus stacking operations) needed to assemble a ship or booster.

All told, while tents (“sprung structures”) can clearly be indefinite solutions for things like automotive manufacturing, Starship production is one case in which a more permanent flat-ceiling building is undeniably superior.

With more than two years of experience and data to draw from, SpaceX may finally be confident enough in its present-day Starship production methods to commit to the construction of Starbase’s next evolution. It will, however, still be a major launch site for the vehicle, pending regulatory approval, requiring a high launch cadence, served not only by two Launch Towers but also a busy production site.

While the second tower is not expected to begin construction until the FAA and Environmental Studies are finalized, clues into the production cadence projections can be seen on the Boca Chica skyline.

With the build site initially gaining a Wind Break, before a Mid Bay was constructed, an impressive High Bay was soon added to cater for Super Heavy booster assembly. This is now being joined by a “Wide Bay,” twice the width and slightly higher than its neighbor.

With prefabricated wall sections being added several times a day, this new facility is now up to its final level, ahead of the roof being added. Along with the current High Bay, the Production Site will cater to multiple parallel booster and Ship flows.

Despite the fact that the new building is significantly larger and requires several times as much framework, SpaceX’s ‘wide bay’ assembly has only taken slightly longer. Based on past trends, it will likely take less than a week for all four sections of the wide bay’s fifth level to be installed, at which point the whole structure will be approximately 90 meters (~295 ft) tall.

It remains to be seen if the wide bay will get a smaller sixth level for its roof. SpaceX turned the top of the high bay into a combination of a bar, meeting room, entertainment venue, and an observation deck with wraparound windows.

SpaceX has never used the high bay to stack more than one vehicle (Starship or Super Heavy) at a time, seemingly implying that it only has enough usable floor space for three 9-meter (30 ft) wide sections of either rocket.

Measuring about 40 meters (130 ft) tall, Starbase’s ‘midbay’ is the hub for Starship tank section stacking but is too short to be used for nose section installation. If SpaceX maintains its pace, the wide bay could easily have its basic structure completed by the end of next month.

Additionally, a supplier has already delivered most of the components needed for the wide bay’s two large bridge cranes, meaning that SpaceX likely won’t have to cut a hole in its roof – like it was forced to do with the high bay – to begin using the new building as soon as possible.

It’s not entirely clear how the wide bay will integrate into the current ship and booster assembly flow but the building will likely measure around 35m by 50m wide (115 ft x 165 ft), 95-100m (310-330 ft) tall, and offer approximately twice as much usable surface area as the high bay upon completion.

CEO Elon Musk says that SpaceX’s goal for Starbase is to complete at least one Starship and Super Heavy booster per month by the end of 2022. With the wide bay and some general streamlining, that may actually be achievable.

Meanwhile, Booster 4 and Ship 20 continue to prove their worth during ground testing objectives, with the duo enjoying a series of cryoproofing after they were de-stacked after Musk’s overview. Ship 20 underwent at least two cryo-proof cycles, while Booster 4 later joined the frosty party.

Additional testing on Ship 20 is taking place during the planned roadblock on Tuesday. These tests are beneficial for vehicle data and the Ground Support Equipment (GSE), such as the Orbital Launch Site tank farm.

Back at the Production Site, the latest status – taking into account Ship 22’s move – sees Booster 7 and Booster 8 in various stages of preparation, while Ship 24 will be the next Starship to be assembled.

However, sections for additional vehicles will be deep into production, hidden away inside the large production tents at the build site. Numerous nosecones can often be seen taking a peek at the outside world, while deliveries provide clues to the production cadence and future advances in the assembly of the vehicles.

The latest arrival included the new design of the Methane Transfer Tube, relating to the change of location for the Liquid Oxygen header tank on the boosters. While Booster 5 had a header tank on the side for landing burn, this is being phased by a coaxial tank design where the header tank surrounds the methane transfer tube.

The ship header tanks will be in the nosecone, not anywhere close to the transfer tubes. Notably, while new iterations of design have been commonplace throughout the history of Starbase, it now places into Musk’s reference to the site’s use as for “R&D” and testing.

Along with the future facility at Roberts Road, the claims of vast amounts of rapidly reusable rockets being required to make life multi-planetary are becoming more realistic by the day, as the addition of more facility space eases the bottleneck of production.

Thanks for reading till the end. Comment what’s your opinion about this information “SpaceX Starbase Factory Prepare For MAJOR Upgrade“.