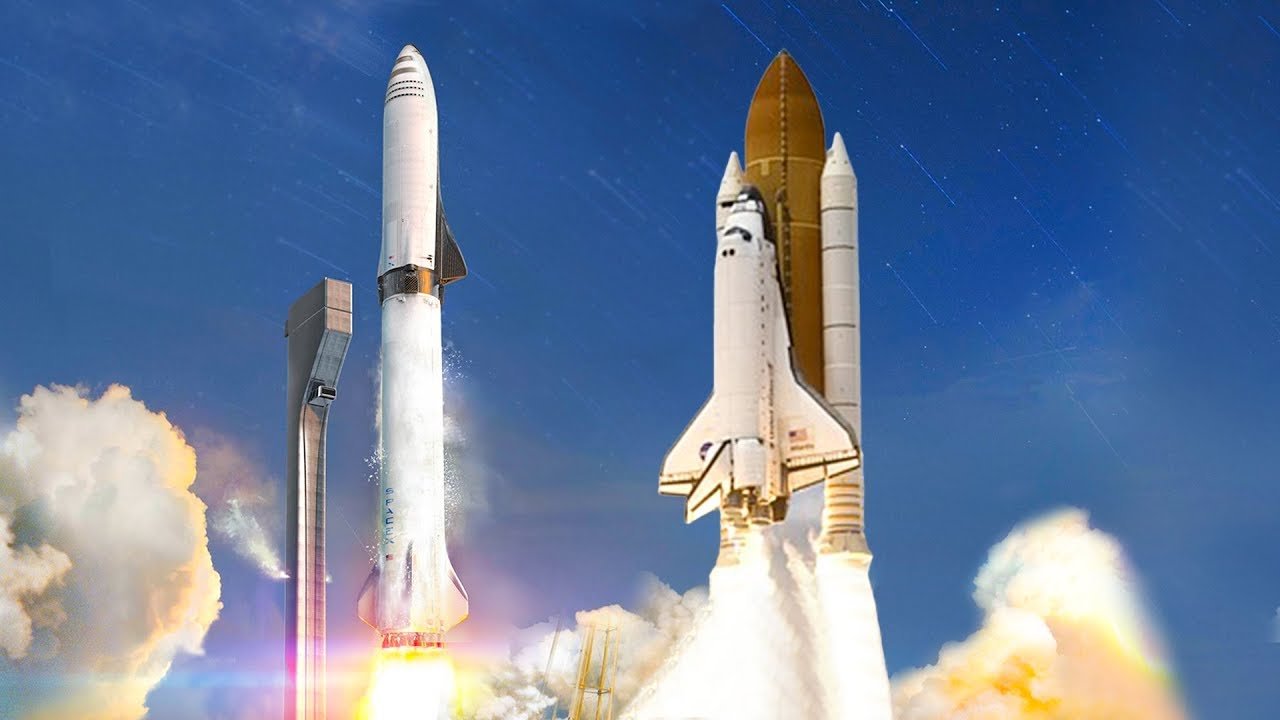 Will the SpaceX Starship fail like the Space Shuttle?: The year is 1972, the final Apollo mission to the moon has just been completed and President Nixon has announced a new American Spacecraft. “This is the largest spacecraft ever launched by man, the first winged spaceship” “The world’s first reusable spacecraft” The Space Shuttle.

Capable of carrying several astronauts as well as large satellites into Earth’s orbit. This new idea for a reusable spacecraft was meant to drastically reduce the cost of getting into orbit, and although the Space Shuttle did complete hundreds of successful missions, it never really lived up to everything it promised to be.

Today, we have SpaceX making another attempt to cut the cost of getting into space. But what are they doing differently? How do we know the BFR won’t become another Space Shuttle?

In this article, we’re going to compare the BFR to the Space Shuttle, we are also going to look at what caused the Shuttle to fail and what SpaceX is doing to avoid the BFR having a similar fate.

From the very beginning, the Space Shuttle was designed to be reusable and cheap to operate. During the development of the shuttle, NASA estimated that the total cost of the shuttle’s 14-year life span would be approximately $45 billion and that each flight would cost $54 million.

NASA’s original estimates were too low. This was largely due to the incredible amount of refurbishment required after each flight. The basic idea was to have the shuttle checked out quickly between each flight, like an airliner.

This turnaround process was expected to take about 2 weeks, however, it would typically take around 3 months.

Each of the three RS-25 engines had to be disassembled and refurbished after each flight and since the propellant used for the RCS thrusters was so toxic, no other activities could be performed on the shuttle while they were being handled.

One of the most time-consuming aspects of refurbishing the shuttles was the heat shield, in which each of the 35,000 tiles had to be individually inspected between each flight. SpaceX plans to use a material called Pika-X for its heat shield.

While this material is designed to be slowly eroded away after each flight, SpaceX aims to achieve hundreds of uses before it needs to be replaced entirely.

If SpaceX wants the BFR to succeed in being cheap and reusable, it will need to master the art of rocket reusability. In fully reusable mode the Falcon Heavy is currently capable of carrying the same payload capacity as the Shuttle, but for a fraction of the cost.

But if they make the master rocket reusable, they will need to do so without compromising safety. One of the biggest problems in the Space Shuttle program really had nothing to do with the vehicle.

It was actually NASA’s attitude towards security, which in the 1980s began to become more liberal. Because of the incredibly ambitious launch schedule, upper-level management at NASA began embracing what many called the “go-fever.”

With BFR aiming to make its first flight to Mars in 2022, it is of the utmost importance that SpaceX does not follow the same path of cutting corners to make its deadline.

One thing SpaceX has shown off over the years is its ability to make quick changes to the design of its rockets. SpaceX’s Andy Lambert once said that no Falcon 9 was ever the same, with every new rocket being upgraded from the factory.

This rapid development allowed them to perfect the Falcon 9’s propellant landing technology. However, they’ve also had their fair share of setbacks, which will no longer be an option once they start launching humans on the BFR.

Another thing that held the Space Shuttle behind was the design and manufacturing process. The workload was spread across several different companies across the country to make the program more attractive to Congress.

This not only increased the cost of the program but also added an additional layer of complexity to the entire construction of the shuttle.

On top of that, NASA had some prerequisites for the Space Shuttle, which often requires using older hardware rather than developing new and more effective solutions.

Since SpaceX would not need to comply with such specific requirements, they could design the BFR from a blank canvas, and with almost everything being designed and manufactured by SpaceX, every part of the vehicle would work together, completely as intended.

So although a lot of the hype surrounding the BFR is reminiscent of the Space Shuttle concept, it looks like SpaceX is already getting started on a better foot. And if their success so far is anything to go by, we know BFR will be very exciting.

What do you think about BFR? Will it live up to its goals or will it struggle to achieve the low cost and rapid reusability that it promises to have. Let me know in the comments below.

Thanks for reading till the end. Comment what’s your opinion about this information “Will the SpaceX Starship fail like the Space Shuttle?”.

4 thoughts on “Will the SpaceX Starship fail like the Space Shuttle?”