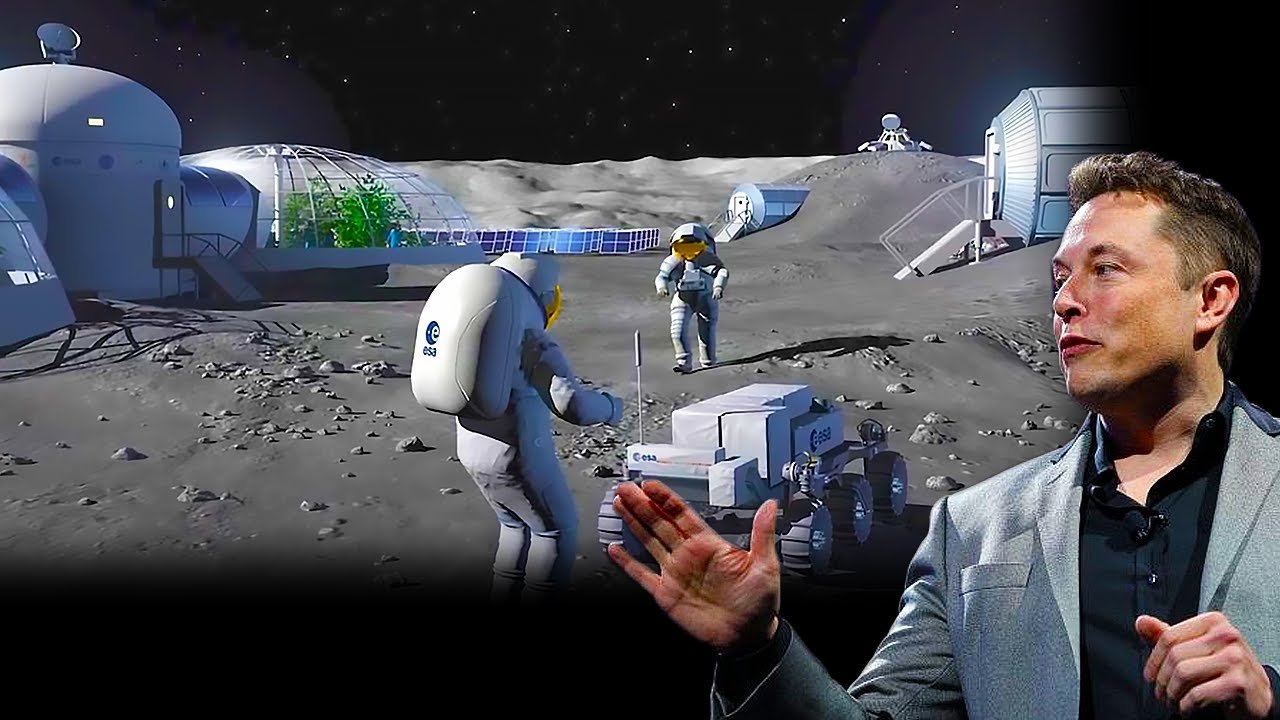 Elon Musk’s Plans For SpaceX’s Moon Base 2024: Human habitation on planets other than Earth was a pipe dream twenty years ago! However, today it’s looking more like something that will be a reality, very soon.

Unlike the Artemis program’s proposed Lunar Gateway, SpaceX is NOT planning to build another lunar space station in orbit around the moon, but something MUCH better. Join us as we explore what Elon Musk’s plans for the moon are.

Elon Musk said earlier this year that the space industry should “consider the next step beyond space stations”, Reuters reported. SpaceX successfully launched and landed a Starship rocket for the first time without it exploding around the same time Elon Musk made that statement, marking a significant step forward in humanity’s journey to Mars.

In addition, NASA awarded SpaceX a $3 billion contract to continue developing Starship in order to return humans to the Moon by 2024, which is well-known news by now.

Musk estimates that a Mars landing may happen as early as 2024 or 2026, with the goal of establishing a self-sustaining colony on the Red Planet by 2050. However, Musk’s plans for a fully-fledged moon base were revealed and talked about much earlier.

He teased a glimpse of his vision for space colonization on Instagram, ahead of a highly anticipated presentation at the International Astronautical Congress in Australia.

First, Musk shared an artist’s rendering of SpaceX’s Interplanetary Transport Vehicles (ITVs) at what looks to be a moon outpost, dubbed “Moon Base Alpha.” While the Earth sparkles in the sky overhead, gray spherical domes in the distance hint at astronaut living zones.

“Dawn and dusk sky are blue on Mars and the day sky is red.” We understand that many of us probably wouldn’t be familiar with the very concept of a base of human habitation away from Earth. So let’s take a moment to explain that a little.

A moonbase is a facility on the Moon’s surface that allows humans to conduct activities there. As a result, it differs from a lunar space station in orbit around the Moon, such as the Artemis program’s proposed Lunar Gateway.

Moon bases can be for uncrewed or crewed usage, with living facilities not always included in either scenario. Obviously, SpaceX and Elon Musk were not the first to come up with a serious plan for establishing bases on the Moon.

The Zvezda moonbase was a Soviet concept and project, to build a crewed moon base as a successor to the N1-L3 crewed lunar exploration program from 1962 to 1974. The project was assigned to Barmin’s Spetcmash department by Soviet space director Korolyov.

Technical specs referred to the project as DLB Lunar Base, whereas official materials referred to it as Zvezda. The project’s creators dubbed it Barmingrad or Barmin’s city unofficially.

The Japanese Aerospace Exploration Agency (JAXA) envisaged a human lunar landing in 2020, with a crewed lunar outpost by 2030, as of 2006. However, there was no money for this project as of 2006.

Proposals for a human habitation plan for the moon are often backed up by a desire for preservation. In 2007, Jim Burke of the International Space University in France warned that in the case of a civilization-ending asteroid collision with Earth, humans should plan to preserve humanity’s culture.

It was suggested that a lunar Noah’s Ark be built. The International Lunar Exploration Working Group may be in charge of further planning (ILEWG). The closest current competitor to SpaceX and their plans would be from China.

China suggested the International Lunar Research Station (ILRS) in 2020, which is comparable to the Moon Village, with Roscosmos and the European Space Agency (ESA) expressing interest. Phase IV of the Chinese Lunar Exploration Program will be the first step toward building the ILRS.

The ILRS is anticipated to commence long-term robotic and short-term manned missions in the early 2030s. On March 9th, 2021, Roscosmos and CNSA signed a memorandum of understanding on collaboration in the development of the ILRS.

A timeframe has been proposed that runs from the 2030s to 2045. We are currently lacking properly detailed info regarding SpaceX’s own moonbase, pertaining to how science is supposed to help it work.

Specifics regarding the mechanisms powering life support systems, systems for breathable air, methods of construction, and other related information. However, we can attempt to glean all of it from a similar plan. In 2015, the Moon Village idea was revealed.

In this sense, “village” refers to a gathering of worldwide public and private investors, scientists, engineers, universities, and businesses to debate their interests and skills in building and sharing infrastructure on the Moon and in cislunar space for various reasons.

The concept’s open nature would allow for any type of lunar activity, including robotic or astronaut missions, 3D printed dwellings, refueling stations, relay orbiters, astronomy, resource extraction, and even tourism.

The goal is to accomplish some level of cooperation and make use of any synergies in order to establish a permanent, sustainable presence on the Moon’s surface, whether robotic or crewed.

In 2017, Jan Wörner, the European Space Agency’s Director-General until 2021, defined the Village as “an understanding, not a particular facility.”

Before attempting to accomplish the same on Mars, this endeavor is designed to be the first step in coming together as a species and creating relationships and “know-how.”

The sum of the entire proposal describes this approach as a replacement for the orbiting International Space Station, which will be decommissioned in 2024.

This concept has already attracted support. China has expressed interest, as has NASA, in the possible synergy it may provide with the projected Lunar Gateway. Blue Origin has also indicated early interest and volunteered to create a cargo lander with a payload capacity of 4,500 kg (9,900 lb).

Together with Neil Armstrong as the first two Americans to walk on the Moon, Buzz Aldrin has long pushed his countrymen to work together with foreign partners to reach the Moon. Ukraine’s State Space Agency has promised to respect such plans and work to establish “sustainable lunar colonization.”

Elon Musk shared some details via Twitter about Starship missions to the lunar surface. Musk explained how Starship would need to undergo some different adaptations to land on the moon, differing from the Mars Starship version “We’re working on new legs, wider stance & able to auto-level. Important for leaning into wind or landing on rocky & pitted surfaces.”

Musk also explained that “Forward thrusters are to stabilize the ship when landing in high winds. If the goal is to the max payload to the moon per ship, no heat shield or flaps or big gas thruster packs are needed.”

Members of the SpaceX leadership have provided us with some details regarding the project. “A lunar optimized Starship can fly many times between the surface of the Moon and lunar orbit without flaps or heat shielding required for Earth return,” SpaceX stated.

The most intriguing assertion comes from SpaceX’s chief Mars development engineer Paul Wooster, who stated in October 2019 that the company is capable of creating a facility on the moon and on Mars at the same time.

And we definitely cannot wait to see that come to pass. Our comment section is open, tell us what you think of this joint task force to create a moon base!

Thanks for reading till the end. Comment what’s your opinion about this information “Elon Musk’s Plans For SpaceX’s Moon Base 2024”.