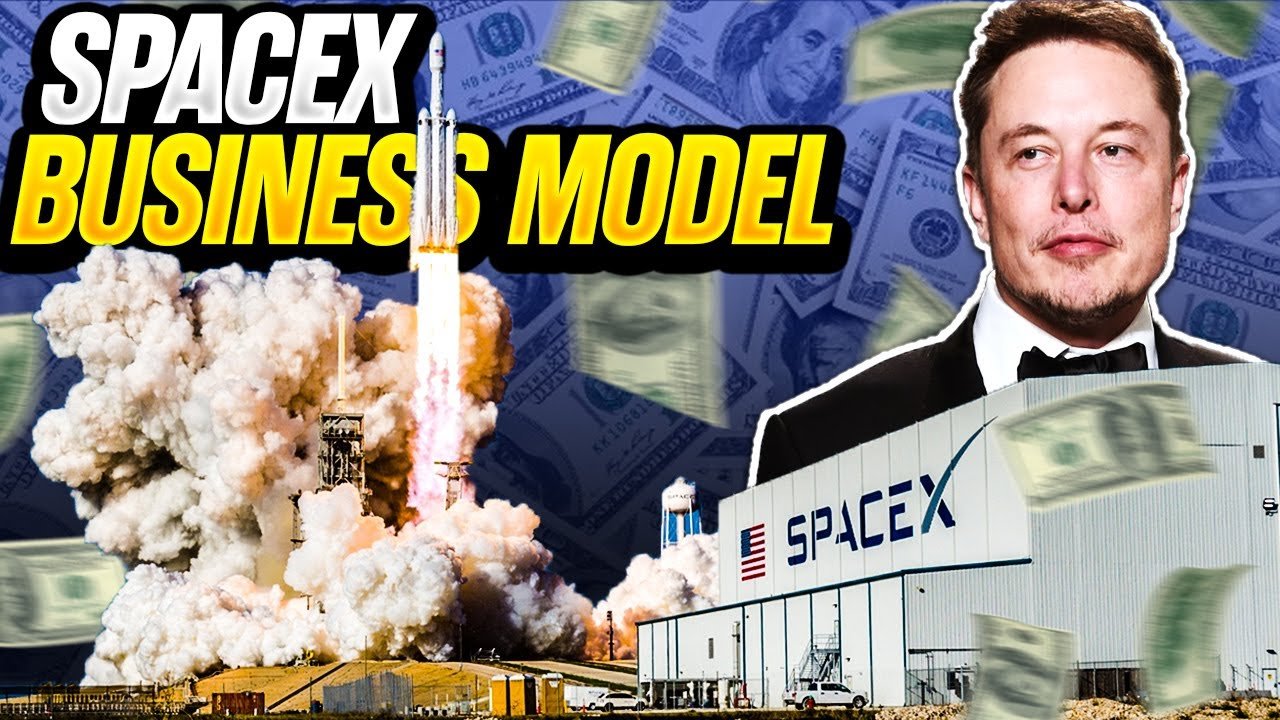 How Spacex Really Makes Money?: When SpaceX was founded in 2002, Elon Musk stated that its primary purpose is to make humans interplanetary beings and pique people’s interest in space exploration.

Although a lot of achievements have been made towards that goal, a rocket capable of going that length, say to Mars, hasn’t been finalized yet. Considering fact that a single rocket costs upwards of 35 million dollars, how does SpaceX makes money to fund all of their projects including the prototypes that have blown up so far? Well, we will find out in just a second.

It seems like a fairly ridiculous question to ask. After all, SpaceX clearly makes money off of signing contracts to build products and work for NASA. Right? Well, it is more complicated than that.

Before we go into the details of how they actually make money though, let’s briefly revisit the key drivers of its valuation, which now reportedly stands at about $100 billion. Musk founded SpaceX to rekindle public interest in space exploration, with the goal of funneling additional funding to NASA.

In his early years, he conducted an unsuccessful journey to Russia in search of low-cost rockets. Musk decided to create a firm and construct the rockets himself during the journey home. However, this would only be possible if cheaper, off-the-shelf componentry integrating the modular nature of software engineering was used.

According to numerous sources familiar with the matter, SpaceX has reached an agreement with new and current investors to sell up to $755 million in shares from insiders for $560 per share, bringing the company’s valuation to $100.3 billion.

According to reports, the firm did not raise fresh money at this time, with the acquisition offer reflecting a secondary sale of existing shares. The new share price represents a 33% rise over SpaceX’s previous value of $74 billion at $419.99 per share in February when the firm raised almost $1.2 billion.

In February, the business conducted a similar secondary transaction, with insiders selling up to $750 million. SpaceX’s new value makes it one of the world’s few private “centicorn” or “hectocorn” firms – a $1 billion unicorn multiplied 100 times.

According to CB Insights, Musk’s SpaceX is now the world’s second-most valuable private business, trailing only China’s Bytedance and surpassing finance giant Stripe. SpaceX may be the most popular company on the planet that everyone wants to invest in but no one can. So, why is SpaceX so well-liked?

Undoubtedly, a large part of its appeal derives from SpaceX’s incredible success in launching satellites and then safely returning the rockets to Earth. That is an accomplishment that no one else has yet achieved. Now, SpaceX is valued at $100 billion and continues to attract strong attention from investors for its visionary products. This begs the question: How does SpaceX work?

The major motivator behind SpaceX’s business strategy is the company’s concentration on delivering space transportation to governmental and private entities. They are also experts in rocket design as well as the creation and launch of a satellite network.

The SpaceX crew collaborated with Tom Mueller, a famous rocket designer, to develop its first rocket, the Falcon 1. Elon Musk used $100 million of his personal fortune to fund the initial project.

The Falcon 1 flew successfully for the first time in 2008, followed by the Falcon 9, Falcon Heavy, the innovative Starship, and the Dragon, which can transport up to seven passengers to and from Earth orbit.

The Dragon is the first private commercial ship to transport US astronauts to the International Space Station and, according to SpaceX, the only spacecraft capable of returning substantial amounts of cargo to Earth.

SpaceX’s inventory is costly, with the Falcon Heavy spacecraft costing about $90 million to manufacture and the Falcon 9 costing $62 million. Due to the reusability of certain of its rockets, SpaceX has previously stated that they can ultimately reduce the cost of commercial customer launches to $30 million.

SpaceX has reused two main components of its rockets: first-stage boosters and the rocket’s nosecone. The boosters, which SpaceX has frequently landed, account for about 60% of the overall cost of the rocket, or approximately $37 million. SpaceX was also able to retrieve the fairings, which cost around $6 million.

As mentioned previously, a big chunk of SpaceX’s revenue comes from contracts with government agencies and other huge private firms. NASA has awarded SpaceX multiple contracts to resupply the International Space Station.

The most recent deal included $2.9 billion in financing for a flight to the moon. In addition, they collaborated with the National Marine and Atmospheric Administration (NOAA), deploying a satellite to monitor global sea levels and oceanic circulation in 2012.

This launch was estimated to cost $82 million. Similar contracts for the Air Force resulted in the launch of a GPS satellite in 2015, and SpaceX was awarded a contract to fulfill 40% of all U.S. military launch requirements in 2020.

SpaceX has also been offering beta access to its Starlink project for $99 per month, with a one-time $499 purchase of a dish and router. They aim to ultimately expand to provide internet access to aircraft and have begun discussions.

Starlink is a satellite network that aims to provide high-speed internet connectivity to every inhabitant on the planet. SpaceX’s Starlink project aims to build an interconnected network of 4,400 satellites, called a constellation, in order to deliver high-speed internet access to consumers worldwide. SpaceX previously estimated Starlink will cost about $10 billion or more to build but believes that the network will bring in enough revenues to be profitable.

The plan is to eventually IPO Starlink once its cash flow has stabilized. Despite the fact that the project is still in its early stages, SpaceX has already obtained federal contracts to provide high-speed internet to rural Americans.

Morgan Stanley estimates that the service will be marketed for $50 per month, providing SpaceX with $24 billion in yearly free cash flow by 2040. Starlink is making progress supplying broadband internet to the world via satellites, with active users growing from just 10,000 in February to almost 70,000.

Musk added that Starlink could offer service everywhere except polar regions by the end of the year. Starlink is currently providing internet via a network of over 1,500 satellites out of 4,000 orbiting low enough for stargazers to spot them overhead.

Currently, that “constellation” supplies internet to 12 countries, and SpaceX has entered into partnerships with two undisclosed “major” countries’ telecom providers. For further clarity and breakdown of the costs involved in launching rockets, they charge business customers a regular cost of $62 million each launch in space-launch contracts.

It may charge an additional $20 million for more complex government space operations like resupplying the International Space Station, launching an NOAA scientific satellite, or launching a GPS satellite for the Air Force.

SpaceX is clear about the fact that its commercial launches cost $62 million, but until recently, we had no idea what went into that figure. However, following Musk’s presentation at the Code Conference in Rancho Palos Verdes earlier this month, we now know that the first stage of a Falcon 9 rocket costs between $30 and $35 million to manufacture, and that the first stage accounts for 70% of the entire cost of manufacturing a Falcon 9.

Even if we assume a similar cost of overhead, SpaceX may have an operating profit margin of up to 15%. Boeing, for example, spends around 4%. When applied to a projected $1.3 billion in yearly revenue, it equates to around $195 million in annual operating profit – and a stock “operation profit P/E ratio” of 61.5.

Please note that these figures are based on values reported from 2016 to 2018. The numbers look better for SpaceX now that valuation has greatly risen since then. Among the list of multibillion-dollar businesses, SpaceX stands out as one of the few that has developed by focusing on a sector that has existed for decades, rather than disrupting existing industries via the use of technology.

While SpaceX’s ultimate aim of populating Mars would take decades if ever, the firm has completed a number of major milestones since its inception in 2002. This has upended the industry’s status quo as you all know, compelling incumbents such as Arianespace and United Launch Alliance to develop comparable low-cost launch vehicles.

Providing a fully accurate picture of SpaceX’s financial situation is still difficult as SpaceX is not legally obliged to make public these records, unlike Boeing and Lockheed Martin.

Thanks for reading till the end. Comment what’s your opinion about this information “How Spacex Really Makes Money?”.