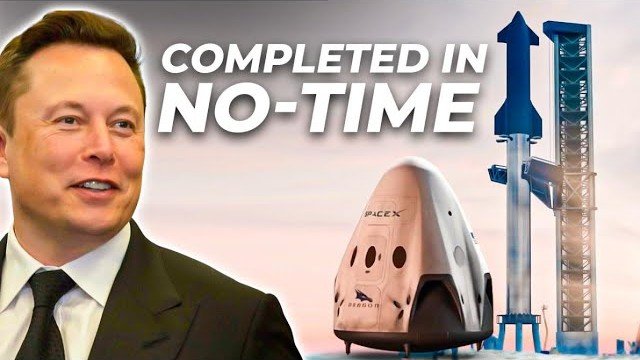 How SpaceX Assembled and Installed Mechazilla Step-by-Step: Mechazilla, one of the best innovative creations of SpaceX to catch its rocket will be discussed right here on this article, on how SpaceX assembled and installed this step-by-step. So, make sure to stay tuned for this very exciting information.

There is no doubt that people have talked about Elon Musk’s contributions to science and engineering, and given the fact that currently, he is the richest person in the world according to Forbes.

And his commitment to the cause of humanity pushes him to do many of the impossible. Further, the success SpaceX and he experienced in reusing a Falcon rocket prompted him to develop a plan for using the next-generation rocket, Starship.

And it is expected that this new plan, once it is successful, will be a first in rocketry. Starship’s new rocket technology will add a tremendous amount of value since it is safer and more practical than the original.

This is because a huge rocket is caught by this new method since it relies on catching it from the sky. As difficult as this method may sound, there are significant benefits associated with it.

And it will allow SpaceX to launch its rockets virtually anytime and anywhere and achieve unparalleled reusability. Therefore, we will discuss today how SpaceX completed the elaborate installation and rigging of the catching arm within a short period.

SpaceX is currently in the works of Mechazilla’s catching arms have been mounted on a carriage this year. And then, they started installing the carriage and arm onto the launch tower.

Further, SpaceX’s team installed this giant device on the launch tower for the first time after assembling it for three months. Overall, it was a historic event that brought together the whole space industry.

And three main components make up the Mechazilla, these are the carriage, the catching arms or chopsticks, and the QD arms. The carriage can be summed up as the structure that occupies the space between the two giant arms. Then, as the rocket flies, the arms will catch it in mid-air.

Moreover, the claw-like arms and the qd arms that stabilize the super heavy are several meters below the QD arms. Having discovered the main components and function of the launch tower, let’s see how SpaceX successfully integrated them and began installing them.

In July, SpaceX successfully installed the final launch tower section of Starship. So began the Mechazilla transformation. Then, approximately two months later, the SpaceX team completed assembling the QD arms, which were meant to reach approximately one-half of the tower.

Next, they attached the arms to two sturdy hinges. A few weeks after the tip and claw were added to the Mechazilla structure and the actuating tip was added to it. Additionally, some plumbing and wiring were added for flexibility and movement.

Furthermore, SpaceX began combining the three major components about a week later, at the beginning of October. And the structure was staged on a temporary support structure after it was turned vertically.

In the end, they turned the arms into the proper orientation to ensure that they were at the right place on the carriage, the actual structure. Afterward, they installed two giant cylindrical bearing pins to allow the Mechazilla to stand on its own more or less freestanding while keeping a precise balance with its surroundings.

Additionally, after a couple of days, SpaceX attempted to install Mechazilla on the launch tower without apparent problems on the 20th of October. Then, in preparation for the lift, SpaceX’s technicians set up two upper and two lower skates per leg on three of the tower’s four legs.

Then, the team wrapped its upper arms around the tower once the carriage was in the correct position, and then began hooking up the carriage to the skates with large pins. But it is still necessary to lift the carriage and the arms with a crane even after they have been installed. And why is this so?

Meanwhile, there is still a lot to be done, to get this to work as it should. Furthermore, SpaceX must complete the installation and rigging of thousands of feet of steel cable that will be attached to powered draw works that support the carriage and catch arms.

Moreover, the assembly would be able to be elevated up and down the tower as an elevator would. Further, the structure will also need to be linked to the ground and control systems using a giant cable carrier that will connect the arms and carriage.

Without the use of a crane, twelve connections need to be made for the catch arms to be attached to the Tower. Nevertheless, the catch arms must be installed and wired on the ground before they can function independently.

And a system of pulleys lifts the carriage and arms, using the steel cable as a support and as an anchor. Additionally, they must complete work on the giant “cable carrier” that will link the structure to the ground and support systems.

Meanwhile, Elon Musk recently said that the long-awaited Orbital Flight Test may take place in November. As usual, Musk shared this news via Twitter, indicating that the test could take place “if everything goes well” and pending approval by the Federal Aviation Administration (FAA).

And a test flight of the SN 20 prototype will take it 200 km (124 mi) above the earth, then generate a soft landing on the landing pad. By completing the flight, Starship will prove its capabilities as an orbital vehicle and demonstrate its ability to return safely from space.

Consequently, SN 20 was the first NASA prototype to be fitted with heat-resistant tiles to safeguard its stainless steel hull against the scorching heat experienced during atmospheric re-entry.

On the day of this update, the Vacuum Raptor Engine 6’s first static fire test of the SN20 prototype was conducted successfully. Unlike the Raptor Engines optimized for sea level, these space engines have a larger nozzle, making them more efficient in airless conditions.

Moreover, the three Raptor engines will also equip the SN20 so that the vehicle can land safely once it returns to Earth’s atmosphere. Then, when this orbital flight is completed, the Starship will be officially ready for commercial flights.

And it is time that such developments have taken place since Musk hopes to send out the Starship in 2023. Further, the flight will be financed by Japanese entrepreneur and billionaire Yusaku Maezawa, and it will feature eight artists making a circumlunar flight which is designed to inspire artists, as well as raise SpaceX’s profile.

Moreover, Musk has said that his company intends to send uncrewed missions to Mars by 2024, followed by crewed missions by 2026. This is quite a task, to be sure and it calls for a thorough testing schedule, too!

However, new reports from South Texas indicate that SpaceX might meet its deadline! Meanwhile, a fan posted a video to Twitter showing the booster coming to rest on movable arms extending from the orbital launch mount, which sparked discussion about catching Super Heavy.

According to Musk, in his Twitter post, this chopstick is inspired by the classic film Karate Kid, which serves as an inspiration for the catching mechanism. Then, as the Starship launches, the launch tower will act as a chopstick, holding it upright while it launches, and it will also catch it upon landing.

And in the uploaded video, when the booster deploys into its mount, it aligns with its mount to stop its descent. Then, from a distance, it can be seen that they slide down the tower until they reach the Super Heavy booster.

Thus, for the movement of the arms to work as intended, great care must be taken to a time and position the arms appropriately. Moreover, Musk said that during the booster’s descent, they would be able to move as needed to match its precise location.

Moreover, the booster won’t strike the launch mount if the catch fails since the catch point will be off to the side. Then, using the same grid fins that guided the booster upon its descent will be transferred back to prepare for the next flight once the booster has come to rest on the extending arms with the grid fence. And a turnaround time of less than an hour will be made possible with this concept.

Despite the booster’s fins, Musk was asked by a Twitter user what the arms would grab to retrieve the ship, asking, ‘Will it be upper flap wings?’ Musk said the boosters have two pins for lifting and catching, ‘although maybe it’s better to modify grid fins to take more load.’ For Starship, ‘something will need to flip out from the leeward side of the top of the ship to do the same there,’ Musk tweeted.

‘Maybe it’s part of the forward flaps, but probably not,’ he added. ‘Different solutions for different load paths.’ According to Musk, they have been using the Mechazilla for the first time with a fifth booster, BN5. And due to the next orbital flight using the fourth booster, BN4, Mechazilla is likely to debut sooner than later.

Thanks for reading till the end. Comment what’s your opinion about this information “How SpaceX Assembled and Installed Mechazilla Step-by-Step”.