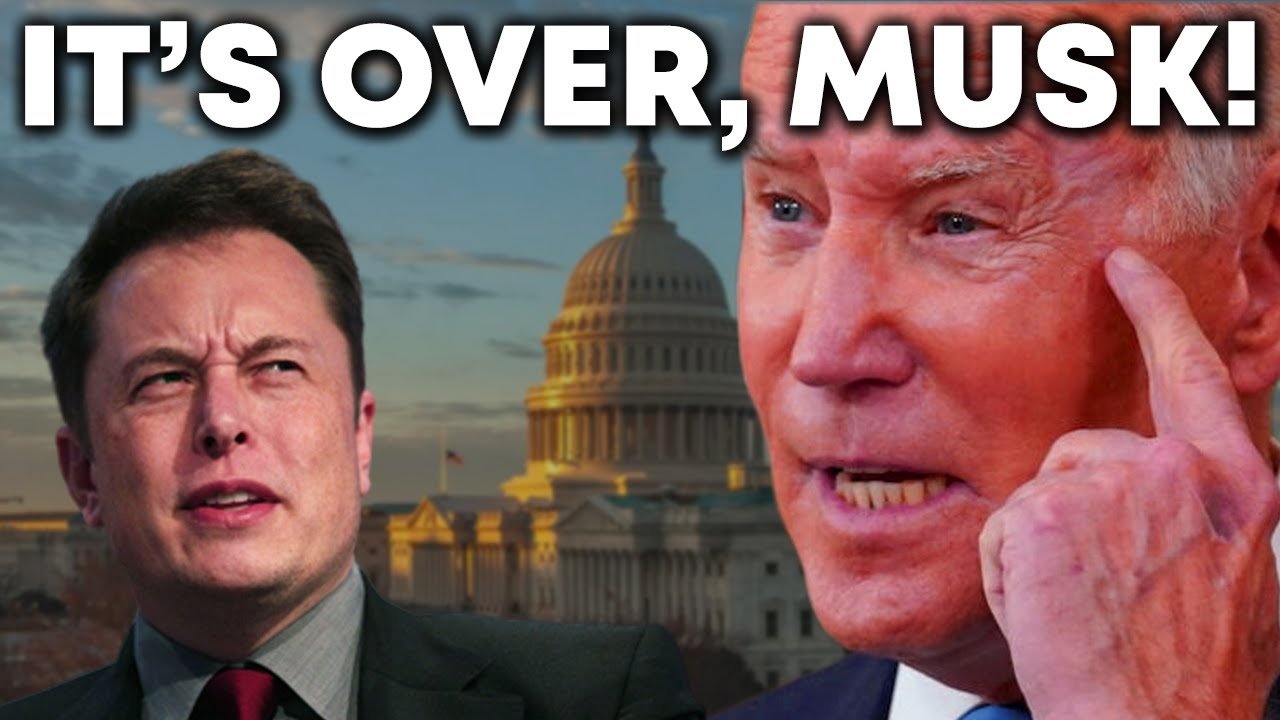 Joe Biden REFUSE To Acknowledge Elon Musk & Tesla:- Joe Biden just made a sarcastic comment that APPALLED everyone. The U.S. President is surely the most savage person on earth, and his LATEST STATEMENT proves it.

In a recent interview, Biden took a DIG at the richest person on the earth, Elon Musk, and the world could not stop talking about it. Let’s see all about Biden’s sarcastic comment that has waged a battle between the US President and Tesla owner.

Biden’s savage answer to Musk’s statement It all started on June 3, 2022, in Washington D.C. when Joe Biden was up on a platform, answering the questions of journalists. Amidst the numerous heated questions, one of the journalists asked Biden about his opinions on the recent Elon Musk statement.

Recently, Musk talked about the super bad economy of the US and further carried his statement forward by declaring that he will be laying off 10 percent of his workforce. The journalist quoted his statement of Musk in front of Joe and asked him about his views.

As savage as the President is, he was already prepared with the answer. To the claims of Elon Musk, Biden clapped him back with the recent sales and numbers of the company Ford.

Amidst the sarcastic statements, he unveiled that Ford has successfully been increasing its investments in the new electric vehicles, with increasing around 6000 new employees, which means the company is expanding its business. Biden tried to make a point that Ford is working in the same economy as Tesla.

It is the same economy where Tesla is reducing its number of employees while another gigantic automobile company is all set to make new investments. In hidden words, Biden directed that Tesla should stop playing the blame games.

It seems like Biden is not ready to take charge of the crippling economy and he still believes the economy of the U.S. has no threats. But this is just not it, Biden had a lot more to say than just stating the example of Ford.

Carrying forward his statements, Joe Biden gave the example of another huge company, the former Chrysler Corporation Stellaris. He unveiled that this company is also making similar investments as Ford.

Biden went further to state the examples of the companies besides automobiles. Intel, one of the largest technology companies, has offered around 20,000 new jobs for making computer chips. Intel would have never given a signal to make computer chips if the economic conditions were not that good.

We cannot deny any of Biden’s claims, as he had stated the facts of the large-scale companies to prove his point. Nevertheless, being the President of a country is a huge post, and at this post, one cannot bear the unsolicited claims made by any of the business leaders, even if it is Elon Musk.

Joe Biden should have stopped answering the question when he gave examples of Ford and Intel. But the savage mind did not stop there. The Fierce Battle Between Musk and Biden At the conference, Joe Biden concluded his statement by congratulating Musk on the mission he had been working on for so long.

He said “all the best ” to Musk about his trip to the Moon. Joe Biden’s positive remarks to Elon Musk were nothing but a savage reply. It is not the first time the two influential figures had gotten into a conflict.

While Musk is trying to reach space for so long, Joe Biden does not count this as an achievement. But being the president of one of the superpowers, Biden will have to stay calm and control his infatuation, and so, he is left with only one option, which is to give taunts disguised as compliments. But people have never underestimated the sarcasm and chilled-out attitude of Elon Musk.

Furthermore, they know Elon Musk will never sit at peace, especially when he is being attacked. It took no time for Musk to reply to Joe Biden. But as people had expected, his reply was straightforward and witty.

Instead of taking Biden’s words personally, Elon Musk simply thanked the president for his so-called kind gesture. As witty as he is, Musk did not even bother to explain his point of view, that is why he said those words before.

Instead, in the two-word tweet, he simply stated, Thanks, Mr. President. Elon Musk turned out to be more savage than Joe Biden. But if you think the problem got solved in these two statements, let me tell you the truth.

The problem between Elon Musk, the CEO of Tesla, and Joe Biden, the President of the US, has just begun. Being a citizen of the country, it seems like Musk will use all his rights. This is not the first time Elon Musk has criticized Biden, instead, they have had a series of arguments over social media in the past. Therefore, Elon Musk has just declared to vote for the Republicans in November.

In the mid-elections of November, Elon Musk would be going to vote for the republicans. It will be a huge step back for Joe Biden due to a number of reasons. First of all, Biden will lose one of his voters, and a single vote means a lot. But the bigger problem is, with Elon Musk giving votes to the Republicans, Biden will not just lose one vote, but one thousand votes.

We know how much of an influential figure Elon Musk is. He has inspired millions of people through his technological knowledge and amazing products. And his recent company, SpaceX, has widened his fan following.

Therefore, with Elon Musk getting against Biden, thousands of people will vote for the Republicans. What Joe Biden has said to be a sarcastic comment might hit him hard in the future. Elon Musk, on the other hand, is still in the safe zone due to his recent astounding deal with NASA.

When Musk started SpaceX, none of us trusted the process and had high doubts if the project was ever going to be successful. But since he is Elon Musk, we know that something good will come out of it that will benefit us all. And this is what happened.

Musk made the project so successful that even Joe Biden could not make fun of SpaceX directly, despite the fact that his mission to go to space is yet to be accomplished. However, Joe Biden knows that NASA selected SpaceX in the year 2021 for the development of the first commercial human lander that will carry the next two American astronauts to the moon.

NASA and Musk had also planned that one of the two astronauts will be a woman. Thus, it will create a history that will be written with golden letters. When Elon got asked about NASA and its mission, Musk revealed that he had always been a fan of NASA.

In fact, at one point, his password was “I love NASA.” He went on to defend NASA by saying that the organization has done a lot of good things for the public, but they are hardly given the credit for it. Another appealing thing about NASA is that they love hard science, and so does Musk.

From the Rovers on Mars to the telescope, NASA has always worked for the public, as per Musk in the conference. Moreover, he also went on to say that public support is very necessary for organizations like NASA to keep striving and accomplishing new goals.

At this conference, Musk shows how much he is into NASA and how diligently he can work to make the project successful. Musk also explained how serious both the organizations are to accomplish their mission to go to the moon, thus, it will soon get successful, despite what people think.

Talking about the goal made by NASA and SpaceX, it is given the name of the “Artemis program” which has two major aims. One is to set the history to make the first woman land on the moon, and the other one includes landing the first person of color on the lunar surface.

This mission will be for one week where the two crew members will explore the surface of the moon and board the lander on this short trip. What further made Biden speechless is the funding of NASA to Space X.

No matter how many sarcastic replies Biden gives, he knows that this goal was created by two of the biggest names in the world, SpaceX and NASA, thus, it will never fail. Biden’s Conflicts with SpaceX While Elon Musk is handling the two big companies simultaneously, he has to take into consideration a lot of other factors.

Recently, he revealed that while SpaceX is all-set to accomplish its mission, Tesla has reportedly frozen its hiring process. He said that he will have to let go of the 10 percent staff of Tesla due to the current economic conditions of the country.

A few most important reasons include higher interest rates, higher inflation, and shortages of crucial products such as chip shortages. Thus, he revealed that he has a super bad feeling about removing the employees.

Musk not just publicly announced it but also mailed the executives of Tesla about the situation, which proved that Elon Musk is quite serious about it. While Musk’s fans accepted the reason behind firing the employees, others saw it as a pessimistic approach of the leader.

Having said that, Musk has finally made his decision. He revealed that although the demand for electric cars is rising, the economic conditions of the world over the past 3 years has led to the shut down of a few Gigafactories of Tesla in China.

All of the reasons combined made Musk make the statements about the crippling economy which led Joe to make a sarcastic comment. Elon Musk blasted President Joe Biden on Twitter on Thursday, adding to the Tesla CEO’s long-standing rivalry with the US President.

The newest squabble between the two is on an issue that has been a source of contention between them for months: Biden’s efforts to promote electric automobiles. Biden recently met with a group of high-ranking auto executives, including GM Chair and CEO Mary Barra and Ford Motor Company CEO Jim Farley, but he left Musk out.

“I meant it when I started that the future will be produced right here in America,” Biden tweeted after the meeting. GM and Ford are producing more electric automobiles in the United States than ever before.”

While Biden was busy at the conference, Musk was replying to all of his followers, stating how he was right. It’s not the first time Biden has shunned one of Musk’s businesses. Musk initially slammed Biden in September 2021, when Biden refused to comment on SpaceX’s Inspiration4 mission’s success.

After three days in orbit, Inspiration4 successfully landed on Earth with four members, a first in space exploration. “The President of the United States has failed to even recognize the 4 novice American heroes who managed to raise hundreds of millions of dollars for St. Jude,” a Twitter user said to Musk.

What is your theory as to why this is the case?” Musk responded simply by adding, “He’s still asleep.” The ongoing tension between Musk and Biden will not end shortly and it is not going to end well for either of them. But we hope the conflicts get solved soon.

Thanks for reading till the end. Comment what’s your opinion about this information “Joe Biden REFUSE To Acknowledge Elon Musk & Tesla“.