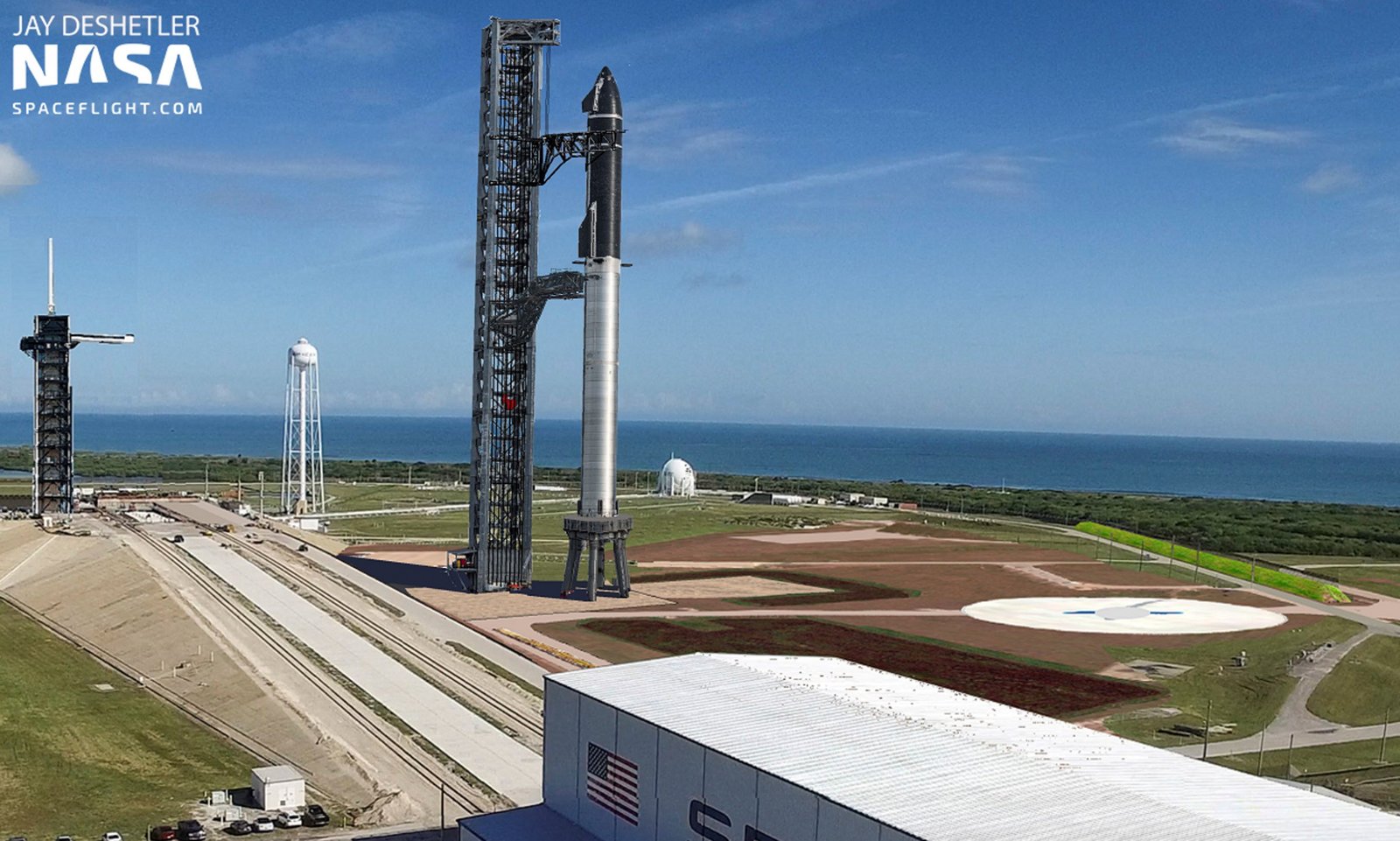 SpaceX has slowly but surely begun the process of building Starship’s first Florida launch pad, including preparations for the off-site assembly of a second skyscraper-sized ‘launch tower.’ This is not the first time.

Back in late 2019, SpaceX began work on a Starship launchpad, located at NASA’s Kennedy Space Center LC-39A pad, which the company already leased for Falcon 9 and Falcon Heavy launches.

By the end of the year, some of the frameworks of the Starship launch mount were already visible, and parts of a giant water-cooled thrust diverter arrived in early 2020. However, work on the pad effectively halted around the same time and entered a state of limbo as SpaceX redirected all of its Starship program on South Texas.

Only two years later did activity finally return. Musk revealed the restart on December 3rd, 2021 and within a matter of weeks, the remnants of the old Starship launchpad – now outdated – had been scrapped and removed, returning the site to a more or less blank slate.

Since then, save for occasional long-distance aerial views, it’s been almost impossible to document progress. But views from SpaceX webcasts of Falcon 9 launches, out of Pad 39A have shown that the company is mostly focused on preparing foundations.

However, in early February 2022, a flyover of a different SpaceX KSC facility revealed the first clear signs of preparation for pad hardware assembly. While unassuming, the small sets of square foundations, recently constructed at SpaceX’s new Roberts Road Falcon storage, refurbishment, and processing center is virtually identical to the foundations, where contractors assembled the first Starship launch tower in South Texas.

Each completed section – measuring about 12m, 40 ft long and wide, and 18m tall, was then transported a few miles by road to the launch site, where a crane would stack them. Roberts Road happens to be located about seven miles, 11 km away from Pad 39A, with a single paved, well-maintained road optimized for wide and tall loads standing between them.

It’s clear, in other words, that SpaceX will build Pad 39A’s Starship launch tower, at its Roberts Road facility and transport the sections to the pad for assembly. More likely than not, to avoid the regular disruption of Falcon launches, SpaceX will do the same with virtually all transportable pad hardware, including the tower arms and launch mount.

In fact, SpaceX has only developed about a third of the land it leased at Roberts Road. Just last month, development plans indicating that SpaceX intends to build two immense warehouse-like buildings, to fill out the rest of the site, were published by a local water agency.

Based on their footprints, they would collectively have more covered floor space, than the entirety of the South Texas Starbase factory, where all Starships are currently built.

During a February 10th, 2022 update presentation, CEO Elon Musk confirmed that SpaceX will build and launch Starships out of Florida, all but guaranteeing that the new facility will be a massive new Starship factory.

NASA, in a statement to CNBC, confirmed that SpaceX is “within the rights of their lease agreement to make launch infrastructure improvements, within the boundaries of the pad.” The agency also confirmed that NASA is not providing funding for the Starship launchpad, and deferred to SpaceX on the project’s scope, cost, and timeline.

The space agency performed an environmental assessment of the plan in 2019 and gave SpaceX permission to begin work within the LC-39A site. But the agency said that “approval is only to build at this time,” with authorization for launches and landings requiring a separate approval process.

Tom Engler, director of planning and development at NASA’s Kennedy Space Center, told CNBC that he thinks the SpaceX plan is “really exciting.” Before the company leased the complex, it was previously used to launch Saturn V rockets for Apollo missions, as well as Space Shuttle missions.

“If you look at the history of the launchpad, this is probably right in line with how it was meant to be used,” Engler said. “To us, it’s really just kind of a reaffirmation of the thought process of why that pad was built, to begin with.”

When SpaceX began Starship development in earnest two years ago, the company started building rocket prototypes both nearby the NASA complex, and at its private facility in Boca Chica, Texas. The company later pivoted to focus on work at the Boca Chica site, which is nicknamed “Starbase,” and has since conducted Starship test flights and more from the Texas location.

Elon Musk said that SpaceX will “hopefully launch” the first Starship prototype to orbit in April or May from Texas, the company’s next major step in developing the rocket. That test is pending regulatory approval, as SpaceX needs a launch license from the Federal Aviation Administration, for the mission, with the federal agency expecting to complete a key environmental assessment by the end of this year.

Musk’s tweet on Friday marks the renewal of work on the Florida launch site, for the mammoth rocket, as he pushes SpaceX to perform as many as a dozen Starship test flights next year.

His construction announcement also comes as SpaceX works to resolve the crisis with the production of the Raptor engines, that power Starship rockets. Which Musk disclosed in an email to employees the day after Thanksgiving. Musk’s email described a dire situation, warning of a “genuine risk of bankruptcy” for SpaceX if the company is not flying Starship rockets regularly by the end of 2022.

In a brief update, Musk tweeted that issues with the Raptor engines are “getting fixed” but did not provide more details on the problem or solution. In the last week, satellite imagery indicates that SpaceX has begun to level the unfinished portion of Roberts Road, likely paving the way for the start of foundation work in the near future.

All things considered, it remains to be seen if SpaceX will truly replicate Starbase, Boca Chica at Kennedy Space Center or, much like how the company systematically upgrades its rockets. If the new Starship factory will represent a block upgrade, with a wide range of improvements and refinements.

Regardless, it won’t be long before Starbase East, and the first of several East Coast Starship launch towers begin to take shape. Starship manufacturing and testing operations are currently centered at Starbase, SpaceX’s facility in South Texas, near the Gulf Coast village of Boca Chica.

The site has hosted test flights of multiple prototype vehicles over the past few years. The highest of those test jaunts reached just 7.8 miles 12.5 kilometers into the Texas sky. But a much bigger leap will happen soon, if all goes according to plan — the first orbital test flight of a Starship vehicle.

Musk has said that SpaceX aims to launch this flight from Starbase in January or February, provided an environmental assessment being performed by the U.S. Federal Aviation Administration wraps up by the end of the year as expected.

Launch Complex-39A has historic significance because it is the same location from, where Apollo NASA astronauts lifted off atop the Saturn V rocket, on a voyage to set foot on the lunar surface.

In 2014, SpaceX signed a 20-year lease agreement with NASA that lets the company use Pad 39A, the jumping-off point for all but two of the agency’s crewed Apollo missions, and most of its space shuttle flights. SpaceX has already launched its Falcon 9 and Falcon Heavy rockets from the site, but the giant Starship requires new infrastructure.