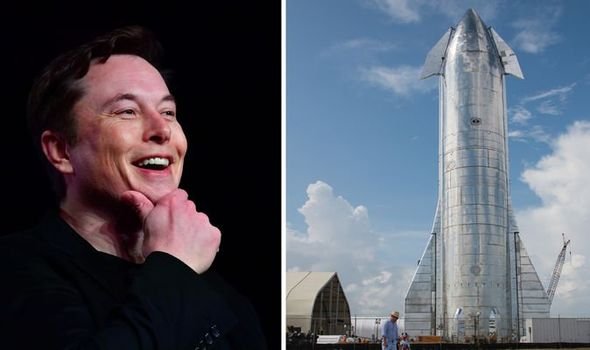 Elon Musk INSANE PLAN For Starship Future Variants:- SpaceX hopes to journey far beyond Earth on what will be the world’s most powerful launch vehicle. In December, a Starship prototype, Serial Number 8, took off from its launch pad in Boca Chica, Texas It flew farther than any of its predecessors – soaring to 12.5 kilometers or 41,000 feet.

In his latest batch of tweets, SpaceX CEO Elon Musk says that the company is already thinking about the many potential ways its next-generation Starship launch vehicle could be used in space.

Already, ideas publicly touted by the SpaceX CEO range from using Cargo Starships to clean up space debris with its mouth-like payload bay to a stripped-down, expendable variant of the rocket to rapidly send massive spacecraft throughout the solar system.

Now, Musk says that SpaceX has also considered tethering Starships together in space to create a form of artificial gravity for passengers on multi-month journeys between planets, as well as the possibility of turning entire Starships into all-in-one orbital observatories a magnitude more powerful than Hubble.

Apparently invoked during discussions with astrophysicist and Nobel laureate Saul Perlmutter, at least parts of the physics community are already considering the possibilities offered by using Starship as a sort of foundation or spacecraft bus that could carry and operate vast scientific payloads.

While Starship has already been officially floated several times as a serious contender for launch services for major future missions, this concept would instead see Starship function as the spacecraft itself. As of 2021, Starship has yet to reach space or orbit once, but SpaceX isn’t far from that milestone.

Eventually, perhaps just a few years from now, Starship will have successfully launched to and operated in orbit dozens or even hundreds of times and become a mature and reliable spacecraft.

At that point, it wouldn’t be out of the question to entrust Starships themselves to serve as long-lasting scientific spacecraft, exploiting a ‘bus’ that could offer abundant power, propulsion, thermal management, navigation, and communications capabilities to any ‘hosted’ payloads.

That includes extensively modifying Starships on the ground to create vast space observatories, among numerous other possibilities. Given Starship’s low production cost, 9-meter (~30 ft) diameter, and nominal ability to deliver at least 100 metric tons (~220,000 lb) of payload to low Earth orbit (LEO), it’s not inconceivable that ships could be outfitted with massive telescopes and scientific instruments.

Meanwhile, Musk says that SpaceX has also considered tethering crewed Starships together and spinning them around the center of that tether to create artificial gravity for crewmembers on months-long journeys between Earth, Mars, and other planets.

Among fan communities, the tethered gravity concept has been circulating ever since SpaceX first announced Starship in 2016. Loosely researched by NASA and other institutions for decades, no real experimental efforts – save for a single halting test during a 1960s Gemini mission – have ever been pursued.

For Starship, orbital refueling could easily allow SpaceX to cut crewed Earth-Mars transit time to 100 days or less – subjecting astronauts to significantly less time in microgravity than those that crew the International Space Station (ISS).

The value proposition of artificial gravity on 3-month cruises is likely substantially less clear-cut given the far-reaching complexity and modifications required to make such a system functional and make Starships compatible.

Regardless, Musk rather cryptically says that SpaceX has considered the concept, though he didn’t elaborate on whether the company ultimately decided to drop the subject or pursue it further. What makes Starship unique is that it’s totally reusable.

The Falcon 9 on the other hand is only partially reusable. The booster returns. SpaceX envisions Starship being similar to a plane, with constant flights and quick turnaround times. It will have to fly hundreds of times without a crew, at least until takeoffs and landings are perfected. Then, it might be able to take a bite out of the commercial airline industry by transporting travelers from place to place on Earth.

The company envisions going from Sydney to Singapore in 31 minutes. LA to Toronto in just 24. Shorter distances may not even require the booster. The spacecraft could travel on its own, powered by 6 Raptor engines. The prototype that flew had three of those engines on board.

Earth to Earth travel may be an easier milestone. But the real focus is farther away. No one has been to the moon since 1972. When NASA sends the next man and first woman back by 2024, it will have to decide which company will get them there. SpaceX has competition from both Blue Origin and Dynetics.

It wants to modify Starship for the historic trip – it certainly doesn’t look like any type of lunar lander we’ve seen before. Sending people to the moon is a tremendous achievement in and of itself but for SpaceX, this is simply a step, an opportunity to gain experience before achieving an even greater dream.

It’s no secret SpaceX is trying to get to Mars. I’m optimistic about the future on Earth but it’s important to have life insurance for life as a whole. Beyond the insurance policy, there is an even bigger reason, which he talked about during a recent event in Berlin. We want to have a future that is inspiring and exciting.

A future where we are a space-faring civilization and out there among the stars. I think that’s, every kid gets excited about that. You don’t even need to teach them. Dreams of humans settling on the red planet will depend on Starship’s rate of innovation.

Musk hopes an uncrewed mission to Mars could occur as early as 2022. And he’s highly confident humans could get there in 2026 or possibly 2024. 100 passengers will brace themselves for a six-month journey.

As difficult as it is to get to Mars, the real work begins upon arrival. Because a city needs constructing, especially if the vision is a million people living there by 2050. A fleet of a thousand Starships will be charged with the daunting task.

This will be an incredibly expensive undertaking, at least $100 billion but possibly trillions. SpaceX is going to need boatloads of cash. Or in this case, shiploads. Its new satellite internet service for Earth called Starlink is projected to bring in $30 billion dollars a year of desperately needed money. What an awesome view with the sunlight hitting those Starlink satellites.

The Falcon 9 has been launching the satellites but it can only carry 60 Starlink satellites at a time. Since SpaceX wants to build a constellation of at least 12,000 that means about 200 flights. And if the company wants to extend that to a full 42,000 one day, 700 launches is no small feat. That’s why SpaceX plans on using Starship to carry Starlink in the future.

Instead of 60 satellites, it can take 400. Its payload capacity is over 100 metric tons or about the weight of a blue whale. Eventually, satellites would also orbit Mars to provide internet to its new inhabitants. Musk hopes to be one of them.

Thanks for reading till the end. Comment what’s your opinion about this information “Elon Musk INSANE PLAN For Starship Future Variants“.