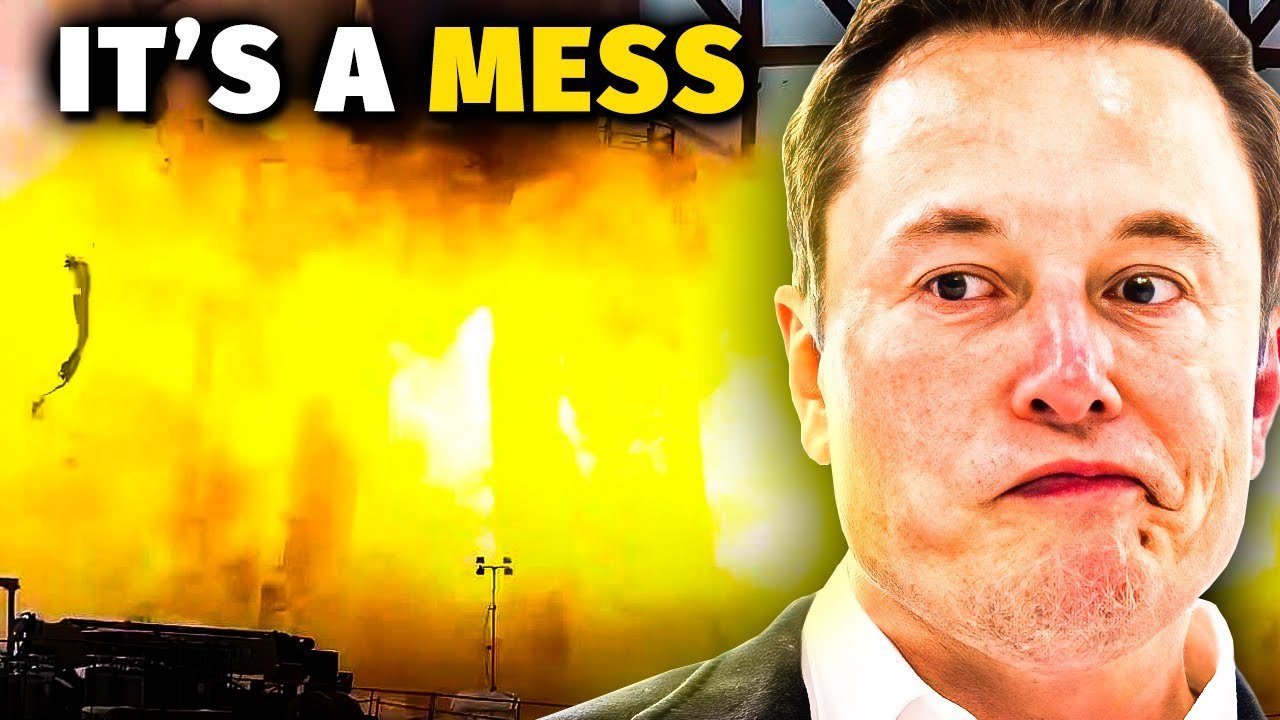 Why SpaceX’s Continuously Postpone Starship First Orbital Launch Fly: SpaceX has been facing a bottleneck in lifting the buttocks of the fully stack starship from the launch pad into space.

Elon Musk promised that by the end of 2022, the fully stacked Starship would lift off into space, but it seems his words were just his fantasy because, till this moment, the Starship has yet to fly into the sky.

The question is, why has SpaceX been holding back on launching the Starship, and why does Elon Musk focus on twitter when the Starship hasn’t yet landed on Mars? Has he lost his focus? Let’s find out.

Musk led SpaceX to the position of success it is today. It’s no news that the billionaire entrepreneur have headed many of his successful tech companies, which we all benefit from today. Talk about PayPal and the Telsa cars.

All have been a blessing for Americans and the world. We may not find the right words to describe Elon’s potential among other humans on earth, but what we believe is that any project managed by billionaire Elon Musk is guaranteed to see success.

Even if it were just Starship and a 33-engine booster that could be used only once, their progress would still be outstanding. But it’s impressive that Spacex could build a reusable transportation system with new engines, a new thermal protection system, and a new way to re-enter the atmosphere. But then to add a rocket factory where starships can be made is reached the dept of our heart.

Even if that wasn’t impressive enough, adding a full test and launch complex with a fully automated fuel depot and a lifting and launch tower makes it even more out of the world. The fact that they did all of this in less than three years and at a fraction of the cost of government space programs is awe-inspiring.

Now the billionaire has decided to invest his energy in twitter and control it how he pleases. So what future does he want to create? Just like he did for his other companies? Let’s dig out Mr Musk’s project for Twitter’s finances over the next few years.

Second, cut Twitter’s reliance on advertising to less than 50 per cent of revenue: Advertising would account for 45 per cent of total income under Mr Musk’s plan, down from around 90 per cent in 2020.

According to the document, advertising would generate $12 billion in revenue, and subscriptions would generate nearly $10 billion. Other sources of income include businesses such as data licensing.

Third, it will reach 931 million users by 2028. The billionaire wants the total number of Twitter users to grow from 217 million at the end of last year to nearly 600 million in 2025 and 931 million in six years. Most of that growth will come from Twitter’s ad-based business, like Twitter Blue mark, which costs $8 a month and lets users change how they use the app.

The pitch deck says Mr Musk thinks there will be 69 million Twitter Blue users by 2025 and 159 million by 2028. Fourth, to have 104 million subscribers for a mysterious X by 2028 It was also revealed that Mr Musk’s estimates for the total number of users include what look like subscribers to a new product called X, which would have 104 million users in 2028.

The document didn’t say much about X Subscribers, but Mr Musk has hinted that Twitter might get rid of ads. In 2023, the pitch deck shows the X Subscribers product, which is expected to have 9 million users in its first year. Again we are forced to ask. How many goals will one man set for himself?

We had the starship project, and now Twitter has become a bigger project for Elon Musk. Will the starship project be on the side now? Because we need to focus on one project to reach greater heights while paying attention to details and cutting down on costs.

It’s perceived Elon’s attention towards Twitter is becoming a source of distraction to him. He had to hand over his full role to Gwynne Shotwell to focus more on Twitter. So now, Elon’s focus on the raptor engine, the Starship and SpaceX as a whole is becoming loose. So what is going on?

A few weeks ago, workers at SpaceX sent Musk a letter about his tweets. “Elon’s behaviour in public is often annoying and embarrassing to us, especially in the last few weeks,” the letter says. “As our CEO and most visible public speaker.

People see Elon as the face of SpaceX, and every Tweet he sends is a public statement from the company. So it’s important to make it clear to our teams and people who want to work for us that his messages don’t match our work, mission, or values.

Eight people who used to work at SpaceX and were fired after criticizing Elon Musk in an internal letter have filed charges saying they were wrongfully fired. In a press release, the former employees’ law firm said that unfair labour practice charges were filed with the National Labor Relations Board (NLRB) for the “retaliatory firings.”

In an email to staff, SpaceX President Gwynne Shotwell said that the “letter, solicitations, and general process made employees feel uncomfortable, intimidated, bullied, and angry because the letter pressured them to sign on to something that did not reflect their views.”

In their letter, the employees said that SpaceX executives should “publicly address and condemn Elon’s harmful Twitter behaviour” and that the company “must quickly separate itself from Elon’s brand.”

In addition, the letter mentioned “recent accusations against our CEO and his public comments that the situation was not serious.” In 2018, SpaceX settled a sexual misconduct claim against Musk by paying a flight attendant $250,000.

Musk denied the claim, and Shotwell told staff in an email, “I think the claims are false.” This is another aspect spacex’s employee claims to be complaining about. The charges filed with the NLRB “say that SpaceX fired five employees the day after the letter came out and four more over the next two months,” the law firm said.

Eight of the nine employees are the ones who have been criticized. “Tom Moline and Paige Holland-Thielen, both employees, filed charges on their behalf. In addition, six anonymous employees had charges filed on their behalf by attorneys Anne Shaver and Laurie Burgess.

Though Shotwell have to call this unrest to order. Musk is the CEO, but he’s mostly just a spokesperson. He’s also yelling at the Starship engineers to make them go faster. Shotwell had worked in aerospace since 1988, when Musk was still in college. So Musk may be the “ideas guy,” but Shotwell is in charge of SpaceX.

But even Shotwell can’t stop Musk from causing chaos at SpaceX, especially since he is now threatening to take over a big social media platform. So, SpaceX fired five people because of the letter. Shotwell sent an email to the whole company, excluding her boss, Elon Musk.

In the email, she said that SpaceX had a lot of work and that the letter made it hard for SpaceX employees to “focus and do their work.” Instead of gossiping or speaking false about the company Remember that NASA entrusted a huge project worth $2.9 billion to transport NASA’s astronaut to the moon, but NASA’s admin Bill Nelson is even becoming worried that Twitter is distracting Elon Musk.

So Nelson had to talk with Shotwell to be sure that Elon Musk was not being carried away with Twitter. SpaceX’s relationship with NASA is being put to the test by Elon Musk’s tweets. Bill Nelson said he had asked SpaceX President Gwynne Shotwell if Musk’s purchase of Twitter would change anything about SpaceX or the company’s commitments to NASA.

In his words he said; “Tell me that the distraction Elon might have on Twitter will not affect SpaceX,”. Nelson said that the SpaceX president assured him he has “nothing to worry about,”. “I hugged her with a smile on my face because I know she is running that thing,” Nelson said, referring to SpaceX.”

Musk has said that managing Twitter takes up at most 5% of his time. Because that 5 per cent of his time is so public, it has a big effect on his other businesses. So, for example, Shotwell has to run SpaceX despite her boss’s increasingly strange behaviour in public.

But this shows her real problem: she’s not the CEO of SpaceX, even though she’s very similar to most CEOs in many ways. One difference? When the actual CEO makes a mess, she’s the one who has to clean it up.

Elon’s paying attention to Twitter and his continuous distraction from managing Twitter which has over 450 million users, is eating up his mind from the Starship, the Mars project, and the contract to transport NASA to the moon’s surface.

So he has have a lot on his plate to eat, although the world is keeping a big eye on him. Even with all these distractions, Elon has found how to Finally Solve the Falling Heatshield Tiles That Frustrates Starship Liftoff, this definitely would fast up all the development of the space race, click on the video to take a look in this.

Thanks for reading till the end. Comment what’s your opinion this post “Why SpaceX’s Continuously Postpone Starship First Orbital Launch Fly“.