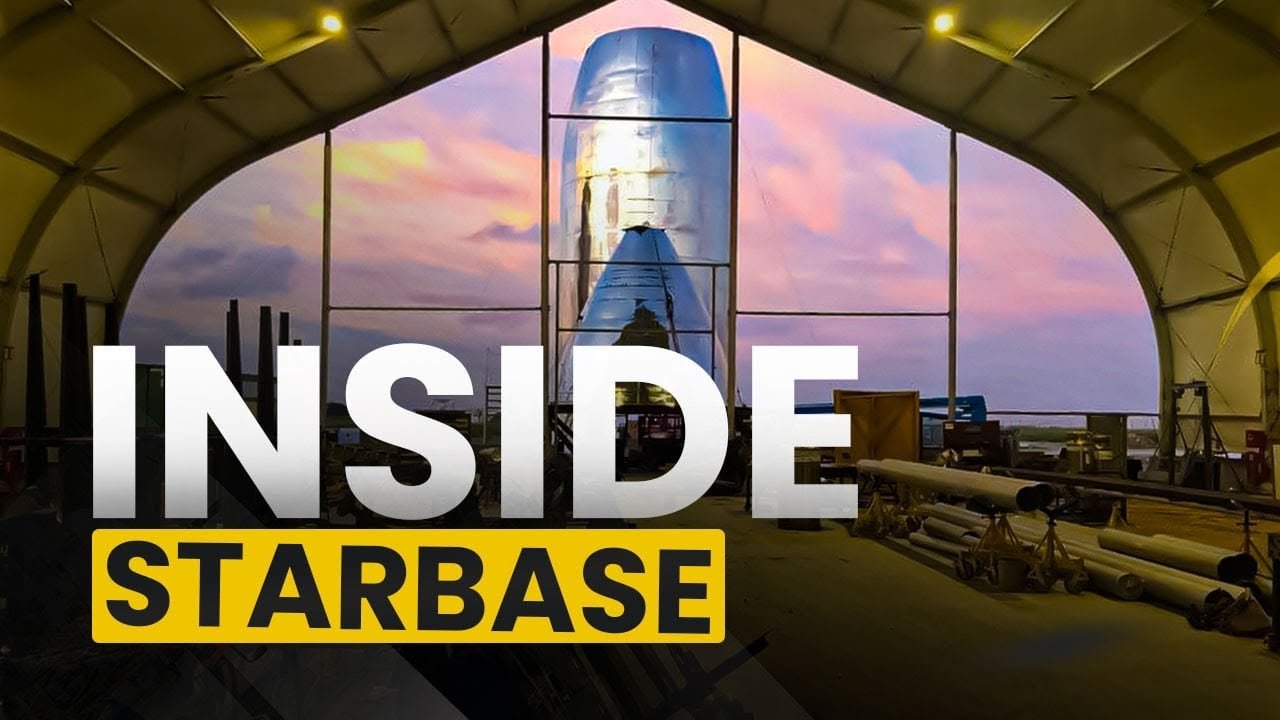 SpaceX Is Turning Starship Factory Into $20B City: From sending unmanned cargo vehicles to the International Space Station to building highly reusable rocket systems, SpaceX has never failed to impress us. But how exactly do they make their revolutionary rockets?

Make sure you read through to the end of this article, because today, we’re about to take a look inside SpaceX’s Starship factory that is turning Elon Musk’s dreams into reality.

Although SpaceX’s headquarters and factory in Southern California attract a lot of attention, most of the loud, dusty, and important research work are done in Boca Chica, a small village in South Texas.

Unlike other rocket manufacturers, SpaceX is, as an industrial sector, in a run-down house in the middle of nowhere. However, when you step inside and see that they are producing these immaculately beautiful rockets, it is as if you have stepped into a factory in another world.

The purpose of the Boca Chica launch site, when first conceived, was to “provide SpaceX with a specialized launch site that would enable the company to adjust its launch manifest while meeting the tight launch window.”

The Boca Chica launch site was initially planned to support the launch of the Falcon 9 and Falcon Heavy launch vehicles, as well as “a range of reusable suborbital launch vehicles”, although SpaceX changed plans in early 2018. announced, which was said to be the launch site. Will only be used for SpaceX’s next-generation launch vehicle, the Starship.

The work environment in Boca Chica is intense and demanding. The EIS team can be found working actively with multiple product development teams to design, build and deliver valuable features to the company.

In terms of product development, SpaceX has an interesting philosophy. Instead of relying on extensive up-front analysis, SpaceX relies on rapid prototyping and iterative development cycles to mitigate risk.

SpaceX has put a lot of effort into automating the process of designing and verification through simulation and delivering the machinery they manufacture through automation.

They use standard CAD software such as CATIA, but they have also invested in an end-to-end 3D modeling technology that allows them to automatically display and simulate entire assemblies as well as print parts.

And most importantly, the software is fast even when dealing with complex assemblies. That way, engineers don’t have to wait which fosters a rapid iterative design process.

According to Musk, they can “take the concept out of your mind, translate it into a 3D object, really intuitively … and be able to print it out and make it real.” Although SpaceX values ​​design and simulation, they do not attempt to perfect a design before putting it to the test.

They design, simulate, and build, but they also often test. He believes that creating something and pushing it to failure teaches him over a hundred simulations.

So instead of wasting months or years on designs and then carefully building a perfect prototype, SpaceX builds lots of them and tests them all in different ways. For example, his Starship would be considered the world’s most powerful rocket in history.

However, SpaceX has done a sophisticated design job by first creating its best design and then testing it, forcing it to its limits, measuring whatever happens, and then going back to the drawing board and starting again.

While it’s impossible to know exactly what’s going on inside the SpaceX factory, we do know that Musk’s army of employees works diligently to achieve Musk’s ambitious goals. The company’s Boca Chica team is already working round the clock, but Musk wants more.

Recently, Musk called an all-hands conference at his SpaceX factory in Boca Chica at 1 a.m. on Sunday. Musk wanted to know why his factory was not operating 24-7. Musk’s engineering team said they needed more people to shift.

So over the next 48 hours, SpaceX hired 252 employees, doubling the number of employees at the Boca Chica factory. The company has grown massively over the past 19 years. And as the company grew, so did its methods.

Musk says, “I think it’s very important to have a feedback loop, where you’re constantly thinking about what you’ve done and how you can do better. I think that’s the best piece of advice: Think constantly. That’s how you can do things better and question yourself.

Musk knows that the root of innovation is the ability to always question how things are done and ask if there is a better, more effective, or more profitable way to do certain activities. And that’s exactly what SpaceX portrays.

SpaceX uses 3D printing to reduce the cost of manufacturing parts whose sizes are constantly evolving. This allows the design to be developed without the need to manufacture a new die: they simply print a new design.

This enables the design to evolve rapidly. No one waits for a design to be perfect before testing it. Instead, one tests it repeatedly, and the results of each test help the design achieve completion even more quickly.

They want to bring the product to the test stand, even if it has flaws. For example, SpaceX’s concept of Starship has been completely revamped. The initial plans for the Starship called for a carbon fiber shell, but this was modified to stainless steel.

And only a few months after the transformation, SpaceX produced its first prototype test vehicle. Starting with the SN8 in December, followed by the SN9, SN10, and SN11 in February, SpaceX has successfully launched four Starship prototypes on high-altitude flight tests.

While the launch has gone off without problems, landing attempts have ended in a variety of explosions. As work on the project progressed at the Starship facility, SpaceX has purchased most of Boca Chica’s three dozen homes, though some homeowners refused to sell until late last year.

Boca Chica, once a haven for retirees, snowbirds, and outdoor enthusiasts, now has only a few dozen residents and is hosting SpaceX’s Starship facility. During the day, visitors line up for selfies with the stainless steel spacecraft under construction.

At night, excavators plow the soil at the busy construction site. Residents are advised to temporarily evacuate for their own safety before testing begins. Even more, may change in the future of Texas neighborhoods.

In March, SpaceX CEO Elon Musk tweeted that he wanted to build a city encompassing Boca Chica Village and the surrounding area. Its name? Starbase.

In a series of tweets about his plans, Musk said the city would cover an area “much larger than Boca Chica,” the unincorporated seaside village where SpaceX built its massive rocket factory.

His tweet read as, “Making the City of Starbase, Texas.” “From then to Mars, and so to the stars,” he said. Soon after, another tweeted, “Please consider moving to Starbase in Texas or the Greater Brownsville/South Padre area and encourage friends to do the same!

SpaceX’s hiring needs for engineers, technicians, builders, and all kinds of essential support personnel are growing rapidly.” With little indication on Twitter, Musk’s Starbase city plans remain unclear. Plans are still in the early stages. has been

During a meeting with Cameron County’s legal department, which includes Boca Chica Village, SpaceX officials expressed interest in incorporation, but neither Musk nor the company has submitted the appropriate paperwork to begin the process.

Musk expects Starbase to be expanded by “thousands of people” in the next year or two, and he plans to contribute $20 million to Cameron County schools and $10 million to Brownsville for “downtown revitalization.”.

SpaceX sees Starbase as a potential spaceport to the stars, from which Starship spacecraft will fly on regular flights. SpaceX is committed to developing revolutionary space technology, the ultimate goal of which is to enable people to live on other planets.

SpaceX is committed to developing Boca Chica as the spaceport of the 21st century. A job application seeking to hire a “project coordinator” to “make Boca Chica, TX an epic place to live and work” said they plan to build a “SpaceX Village” that will have a ‘book’. Activities such as ‘doable rooms’ and volleyball tournaments. , kayaking, and even “spaceport lounge events and parties.”

SpaceX plans to turn the Boca Chica facility into a ‘spaceport and resort of the 21st century. SpaceX founder Elon Musk said the high-bay where they assemble Starship vehicles will feature a bar at the top with a 360 view of the rocket factory.

The inclusion of Starbase could give SpaceX more power over municipal ordinances such as zoning, allowing the company to conduct more test flights and more test flights without having to evacuate the surrounding area for security reasons.

It also has the potential to make the sector more attractive to potential workers. Musk’s intention to build his own city is the latest sign that he is settling in Texas. Last year, he relocated from California to Texas, and his electric-car company, Tesla, plans to develop a factory in Austin.

SpaceX also intends to begin construction on a new facility in Austin to enable the expansion of its Starlink satellite Internet service. SpaceX has practically taken over much of Boca Chica, and the construction of the starbase is only a matter of time.

Thanks for reading till the end. Comment what’s your opinion about this information “SpaceX Is Turning Starship Factory Into $20B City”.

1 thought on “SpaceX Is Turning Starship Factory Into $20B City”