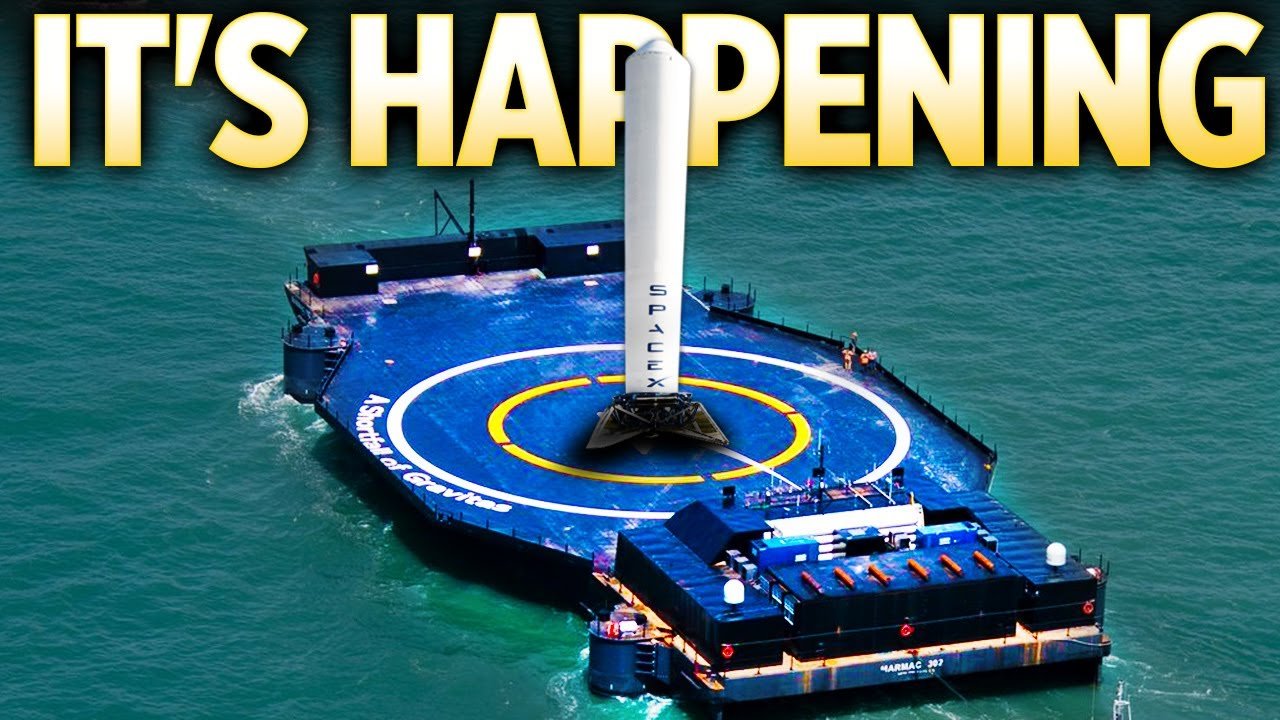 SpaceX Is Now Testing Their New Starship Droneship: The drone fleet used by SpaceX to catch falling rockets now has a third autonomous ship, whimsically called “A Shortfall of Gravitas.” This is their newest effort in creating an autonomous vehicle that is crucial in propelling Starship to success. But how is that?

The new drone ship will be based in Port Canaveral, Florida. It will assist in the launch of the Falcon Heavy and Falcon 9 rockets, which will transport NASA astronauts and cargo to the International Space Station.

Elon Musk unveiled the newest floating rocket landing pad on Twitter Friday along with a dramatic video from a flying drone circling the ship. “Autonomous SpaceX drone ship, A Shortfall of Gravitas,” Musk wrote succinctly in the post.

He added in another tweet, the drone ship is fully automated with no tugboat required to take it out into the Atlantic Ocean near SpaceX’s typical launch site at the Kennedy Space Center in Florida.

According to SpaceflightNow’s international launch calendar, SpaceX’s next scheduled launches are a Starlink mission from Vandenberg Space Force Base in California in July and the CRS-23 ISS supply mission from Kennedy Space Center in Florida on Aug. 18.

The long-running “Of Course I Still Love You” drone ship, which has supported Atlantic launches since 2015, will be replaced by “A Shortfall of Gravitas” (ASOG).

It was transferred to the Pacific Coast this month, commencing a month-long voyage on June 10. SpaceX is increasing the number of launches of its Starlink satellites in California, necessitating the use of more drone ships to capture the reusable stages of its rockets.

Meanwhile, ASOG will operate in the Atlantic alongside SpaceX’s second drone ship, ‘Just Read the Instructions’ (JRTI), which relocated from the Port of Los Angeles to Port Canaveral in 2019.

ASOG is called such after the late science-fiction novelist Iain M. Banks’ writings and his practices in whimsical naming if you’re curious about these names.

ASOG’s arrival also coincides with SpaceX stepping up work on its Starship prototype series, which is intended to test a spacecraft that may one day be used as the backbone of the California company’s Mars colony project.

In line with this, SpaceX has made another important announcement recently. Elon Musk recently revealed that the firm is constructing a second rocket factory in Central Texas near its current plant, which will focus on the manufacturing of Raptor rocket engines.

“We are breaking ground soon on a second Raptor factory at SpaceX Texas test site,” he said adding, “It will be the highest output & most advanced rocket engine factory in the world.” One question that must be running around in many minds is this: Why drone ships?

Why SpaceX Use DroneShip For Landing?

The recovery of SpaceX’s rocket is one of the most crucial components of the company’s quest for the reusability of its space gear. To do this, SpaceX chose to land its rockets on the water.

However, in order to avoid losing the booster and carry it back to land, the boosters land on huge drone ships. The big and reliable drone ships have become a crucial component in SpaceX’s ambition of making space travel affordable after several successful landings and rocket retrieval.

So, they just added another drone ship to its fleet of two. According to the armchair engineer, landing a rocket in the water is suicide since so many things may go wrong.

To begin with, when floating on the water, the drone ship or barge is small in comparison to the amount of land accessible for the booster to land on. The fact that the drone ship itself might be tossed around on the sea, more nearly 300 kilometers off the shore, adds to the difficulty.

As a result of the size and instability of the drone ship, the booster may miss the drone ship and fall into the water, making a recovery more difficult, if not impossible. However, many things went wrong when SpaceX attempted to land a rocket on the ground, with multiple boosters falling and exploding.

Aside from that, SpaceX has compelling reasons to favor a sea landing for its rockets, and one of them is fuel. Fuel is an important component of any mission since engineers must balance carrying enough of it while making the rocket as light as feasible.

As you can expect, the Falcon 9 rockets are hefty, weighing more than 500,000 kilograms, which means fuel is scarce. When you launch into space and the rocket returns, you must reduce the speed from over 8,000 km/h to zero.

This is accomplished by re-igniting the engine, which necessitates the use of fuel. The fuel must be derived from the residue left behind after boosting the top stage. This is where things start to get interesting.

This will be a significant setback for SpaceX’s aim of reusing its rockets. Remember that they intend to send missions to Mars, which will need a large amount of fuel to achieve the necessary speed for launch but not enough fuel for landing.

However, with the help of geography, there is a way out of this difficulty. When SpaceX launches from Florida, the rocket travels east over the Atlantic Ocean. As a result, landing the rocket at sea rather than returning to the launch site reduces the amount of fuel required because the distance is less.

This indicates that for more ambitious flights, SpaceX should land on the water. As Musk put it at a conference, “For half our missions, we will need to land out to sea. Anything beyond Earth is likely to need to land on the ship.”

Another important driver towards building these drone ships is rather well known but not emphasized upon during discussions.

What is SpaceX’s motive now to land and reuse its boosters?

Money is the driving force. SpaceX aims to save money on its launches, and repairing a rocket saves time and costs a fraction of what it would cost to create a new one.

How much money does SpaceX save?

We may never learn the exact amount because it is a trade secret, but it is a combination of numerous variables.

For example, in order to preserve fuel for landing, you must lower your cargo. According to one of Musk’s tweets, this represents a revenue decrease of up to 40% for the Falcon 9. What is SpaceX’s motive now to land and reuse its boosters?

Another 10% is deducted for recovery and renovation charges. So, after two missions, SpaceX has made a profit. Musk believes the rocket can fly more than 100 times, thus the savings are nearly unlimited.

Interestingly, Musk was replying to a tweet in which United Launch Alliance said that a rocket has to fly 10 times for reusability to make economic sense. This demonstrates the economic differences between the two firms, despite being in the same sector.

Landing at sea and retrieving the rocket, on the other hand, would be impossible without the unsung heroes that are SpaceX’s barges or drone ships. There were two in operation prior to the addition of a third this year.

If you’re not a fan of science fiction, you’ll have to get accustomed to the names, which include Of Course I Still Love You which is also known as OCISLY, Just Read The Instructions and A Shortfall Of Gravitas. These enormous drone ships are each the size of a football field.

Of Course, I Still Love You was the first drone ship to enter service in 2015. It provided assistance for launches from Florida by operating off the east coast of the United States.

However, it has subsequently been relocated to the west coast as a result of the addition of a new barge to the fleet. As many of you already know, SpaceX launched Starlink satellites using their Falcon 9 rocket on June 25, 2020.

The rocket carried Starlink satellites, which were added to the existing 480 SpaceX Starlink satellites. These new satellites launched by the American firm are outfitted with a unique deployable sun visor technology designed to deflect sunlight reflections off their antenna surfaces.

This is just one project with its sustainability that is resting on the success of the drone ships. Successful testing of the drone ships represents another triumph on the long road to getting the first humans to Mars and back on a regular basis.

So what do you think? Do you think Elon Musk has been taking advantage of the drone ship designs? Or do you think there could be a better way to achieve what he wants? Let us know what you think of these drone ships in the comments below.

Thanks for reading till the end. Comment what’s your opinion about this information “SpaceX Is Now Testing Their New Starship Droneship”.

2 thoughts on “SpaceX Is Now Testing Their New Starship Droneship”