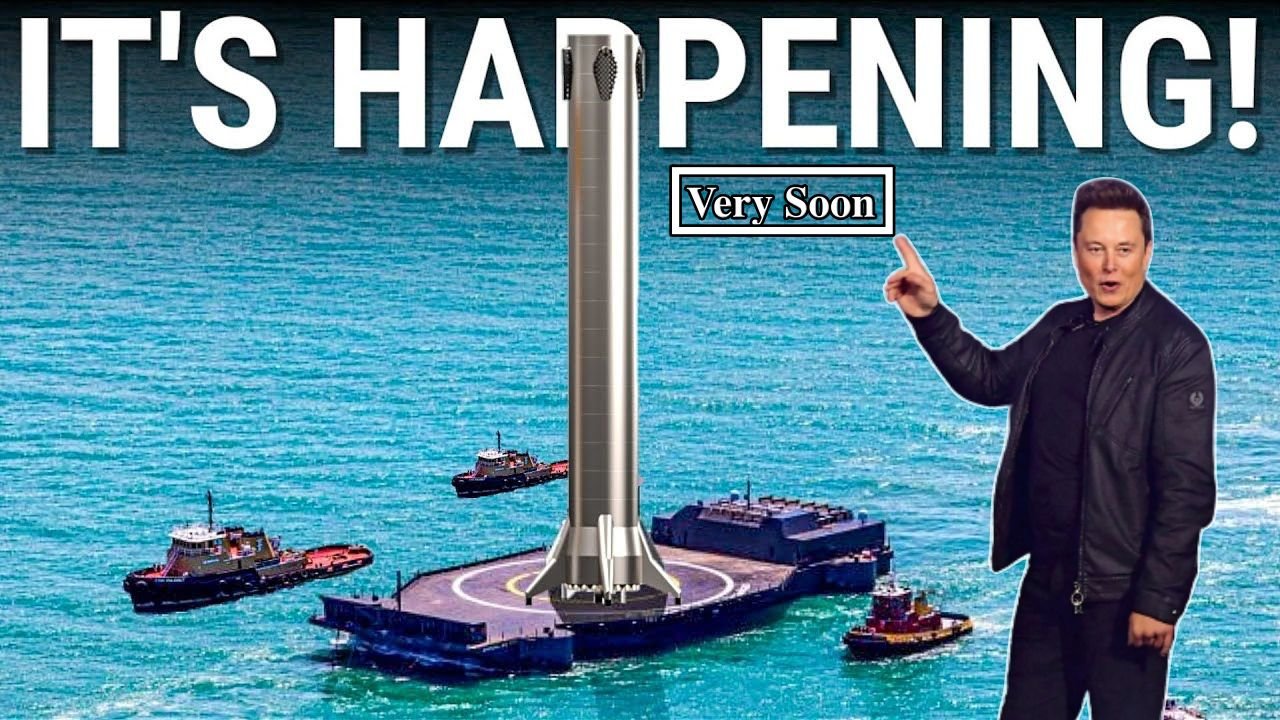 SpaceX Try To Land Super Heavy Booster Onto The Droneship: In a series of new job postings, SpaceX has hinted at an unexpected desire to develop “marine recovery systems for the Starship program.”

Since SpaceX first began bending metal for its steel Starship development program in late 2018, CEO Elon Musk, executives, and the company itself have long maintained that both Super Heavy boosters and Starship upper stages would perform what are known as return-to-launch-site (RTLS) landings.

Weighing several thousand tons and absolutely dwarfing the football-field-sized drone ships SpaceX recovers Falcon boosters with, it goes without saying that towing an entire oil rig hundreds of miles to and from port is not an efficient or economical solution for rocket recovery.

It would also make very little sense for SpaceX to hire a dedicated naval architect without once mentioning that they’d be working on something as all-encompassing as the world’s largest floating launch pad. That leaves three obvious explanations for the mentions.

First, it might be possible that SpaceX is merely preparing for the potential recovery of debris or intact, floating ships or boosters after intentionally expending them on early orbital Starship test flights.

Second, SpaceX might have plans to strip an oil rig or two – without fully converting them into launch pads – and then use those rigs as landing platforms designed to remain at sea indefinitely. Those platforms might then transfer landed ships or boosters to smaller support ships tasked with returning them to dry land.

Third and arguably most likely, SpaceX might be exploring the possible benefits of landing Super Heavy boosters at sea. Through its Falcon rockets, SpaceX has slowly but surely refined and perfected the recovery and reuse of orbital-class rocket boosters – 24 (out of 103) of which occurred back on land.

Rather than coasting 500-1000 kilometers (300-600+ mi) downrange after stage separation and landing on a drone ship at sea, those 24 boosters flipped around, canceled out their substantial velocities, and boosted themselves a few hundred kilometers back to the Florida or California coast, where they finally touched down on basic concrete pads.

Unsurprisingly, canceling out around 1.5 kilometers per second of downrange velocity (equivalent to Mach ~4.5) and fully reversing that velocity back towards the launch site is an expensive maneuver, costing quite a lot of propellant.

In other words, an RTLS landing generally ends up costing at least twice as much propellant as a drone ship landing.

Using the general rocketry rule of thumb that every 7 kilograms of booster mass reduces payload to orbit by 1 kilogram and assuming that each reusable Falcon booster requires about 3 tons of recovery-specific hardware (mostly legs and grid fins) a drone ship landing might reduce Falcon 9’s payload to low Earth orbit (LEO) by ~5 tons (from 22 tons to 17 tons).

The extra propellant needed for an RTLS landing might reduce it by another 4-5 tons to 13 tons. Likely less than coincidentally, a Falcon 9 with drone ship booster recovery has never launched more than ~16 tons to LEO.

While SpaceX hasn’t provided NASA’s ELVPerf calculator with data for orbits lower than 400 kilometers (~250 mi), it generally agrees, indicating that Falcon 9 is capable of launching about 12t with an RTLS landing and 16t with a drone ship landing.

This is all to say that landing reusable boosters at sea will likely always be substantially more efficient. The reason that SpaceX has always held that Starship’s Super Heavy boosters will avoid maritime recovery is that landing and recovering giant rocket boosters at sea is inherently difficult, risky, time-consuming, and expensive.

That makes rapid reuse (on the order of multiple times per day or week) almost impossible and inevitably adds the cost of recovery, which could actually be quite significant for a rocket that SpaceX wants to eventually cost just a few million dollars per launch.

However, so long as at-sea recovery costs less than a few million dollars, there’s always a chance that certain launch profiles could be drastically simplified – and end up cheaper – by the occasional at-sea booster landing.

If the alternative is a second dedicated launch to partially refuel one Starship, it’s possible that a sea landing could give Starship the performance needed to accomplish the same mission in a single launch, lowering the total cost of launch services.

If – like with Falcon 9 – a sea landing could boost Starship’s payload to LEO by a third or more, the regular sea recovery of Super Heavy boosters would also necessarily cut the number of launches SpaceX needs to fill up a Starship Moon lander by a third.

Given that SpaceX and NASA have been planning for Starship tanker launches to occur ~12 days apart, recovering boosters at sea becomes even more feasible.

In theory, the Starship launch vehicle CEO Elon Musk has recently described could be capable of launching anywhere from 150 to 200+ tons to low Earth orbit with full reuse and RTLS booster recovery.

With so much performance available, it may matter less than it does with Falcon 9 and Falcon Heavy if an RTLS booster landing cuts payload to orbit by a third, a half, or even more. At the end of the day, “just” 100 tons to LEO may be more than enough to satisfy any realistic near-term performance requirements.

But until Starships and Super Heavy boosters are reusable enough to routinely launch multiple times per week (let alone per day) and marginal launch costs have been slashed to single-digit millions of dollars, it’s hard to imagine SpaceX willingly leaving so much performance on the table by forgoing at-sea recovery out of principle alone.

Some of SpaceX’s plans for Starship and potential uses include: The first use for Starship will be transporting massive amounts of payload to space.

The 160-foot-tall stainless-steel spacecraft will be capable of launching over 100 tons of cargo to orbit, enabling companies to launch entire constellations of satellites in a single mission.

These satellite constellations take years to complete with the rockets that are currently in operation.

Thanks for reading till the end. Comment what’s your opinion about this information “SpaceX Try To Land Super Heavy Booster Onto The Droneship“.