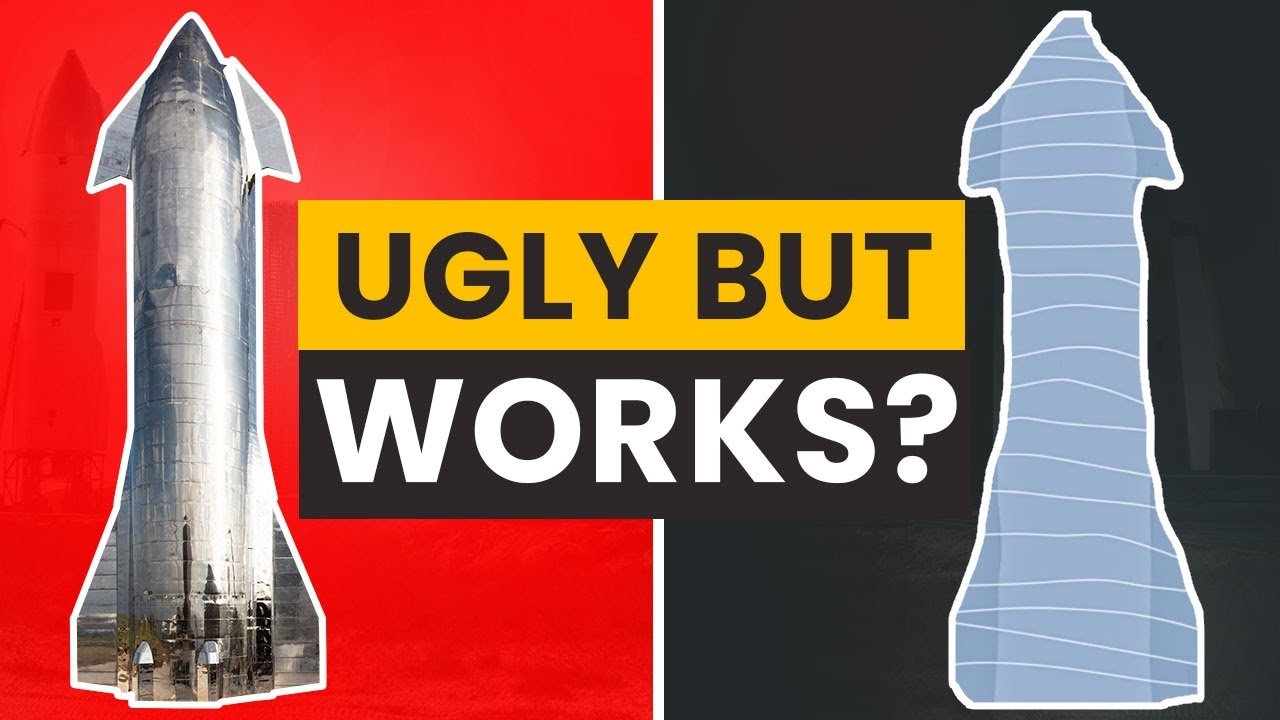 Why Starship Looks So Ugly?: SpaceX’s Starship has definitely lived up to the expectations. But, well, let’s be honest. Starship performs admirably, but it is undeniably ugly in comparison to other rockets. So, why does Starship look ugly? And, was it designed to be unattractive on purpose?

Elon Musk, the founder of SpaceX, envisions a future wherein humans are a multi-planet species. The ultimate objective of SpaceX is to build a sustainable city on Mars by the year 2050.

And to do so, SpaceX is developing the world’s most powerful rocket, Starship, which is capable of carrying 100 people and 100 plus tons of cargo out of Earth orbit, allowing mankind to go to the Moon, Mars, and beyond.

Musk revealed the very first image of Starship on Twitter on January 11, 2019. However, many people were quick to criticize Starship’s appearance, with some even referring to it as a metal sculpture.

At first glance, the craft appears to have come straight out of a 1950s science fiction movie, with a retro, shiny appearance that seems to be constructed out of tinfoil. Referring to the picture, one Twitter user said, “It looks like something I made with tinfoil when I was a kid.”

Another user even questioned its safety, saying: “That does not look safe.” Starship’s appearance forced SpaceX fans to question if there was indeed any reason behind it. And, it turned out that there was.

Simply put, SpaceX develops its rocket to be extremely cheap and functional, and hence compromises on the looks. In fact, SpaceX is so cheap that rival space companies are concerned that SpaceX would eventually “kick them out of space” if they can’t figure out a cheaper way to launch its rockets.

For instance, ULA’s Delta four Heavy costs $400 million for a single launch, and Nasa’s Saturn five costs 1.23 billion $. And according to Musk the spacex starship, when fully operational, will only cost around 2 million per launch.

Let that sync in. That is a 200 to 500 times improvement in costs. It is a significant difference. So, why are SpaceX rockets cheaper? To understand this, we’ll have to go a little back in time. In October 2001 and February 2002, Elon Musk visited Russia. Why you may ask?

After being pushed around with ridiculous prices in Russia, Musk dove into books studying how rockets are built. He learned then that all rocket launches are expensive because everyone launches a rocket once and then discards the entire launch vehicle after the payload is delivered.

It’s the same as if you had used a car or an airplane once. On his way home from Russia, he declared that he would build the rocket himself, along with a spreadsheet outlining the process. And, this was how SpaceX was born.

So you see, Musk’s motto has been rocket reusability from the beginning of SpaceX. And he’s managed to live up to it. In March 2017, SpaceX made history by successfully launching a reused Falcon 9 rocket booster into space.

Since then, more than 50 pre-flown ‘boosters’ have been reused in Falcon 9 and Falcon Heavy launches. However, it’s worth noting that these rockets were only partially reusable. With Starship, the company plans to build a completely reusable rocket. But, how will SpaceX accomplish it?

It’s undeniably come a long way, but SpaceX has had its fair share of failures with its prototypes. Every failure is an opportunity for SpaceX to learn, and the learning doesn’t end there.

SpaceX has become one of the most successful space transportation services thanks to its iterative approach of “learning, apply, adapt, and repeat.”

And, one of the most significant upgrades made possible by this approach has been the switch to stainless steel. Yes, stainless steel! The initial design of Starship was to use carbon fiber for everything – from the body of the spacecraft to the pressurized liquid oxygen tanks.

They even produced prototypes of the parts, which were shared on social media by Elon Musk. However, SpaceX engineers eventually changed their minds and opted to build Starship out of stainless steel rather than carbon fiber.

And one of the major reasons for the change was the expensive cost of carbon fiber. Carbon fiber is a costly material to produce. Elon Musk estimated that a carbon fiber BFS (Big Falcon Ship – the Starship’s former name) would cost $150 per kilogram to build, with a mass of between 80 and 100 tons after all the additional supports and heat shielding.

So, the best you can do with carbon fiber is build a ship that weighs between 80 and 100 tons and is extremely expensive to manufacture. For reference, at up to 100,000 kg x $150 per kilogram, you’re looking at, at least $15 million in carbon fiber costs alone, without including other critical components like engines, flight hardware, computers, software, and so on.

Carbon fiber also conducts heat easily, necessitating the use of a double-walled container with tanks inside a barrel. This practice increases the quantity of carbon fiber that a rocket would require.

Adding twice as much carbon fiber to the spaceship makes it heavier, eliminating the material’s projected weight advantage. Stainless steel, on the other hand, doesn’t require double-tanks, or heavy heat shielding.

In fact, the actual mass of Starship SN8 (built of 304 stainless steel) was only approximately 100 tonnes, and Musk has already indicated that the 30X follow-up serial numbers may be as low as 85 tonnes upon launch. But besides that, stainless steel is also very easy to maintain.

If you make a mistake, you can pound it out with a hammer or cut it out and weld over it. That’s the real kicker when you want to build a reusable spaceship. You can fix it if you poke a hole in it. You may weld a new piece on after breaking a piece off.

Thus, in September of 2018, SpaceX concluded, “This is not going to work to build a rocket where we want to send 100 of them to Mars every two years.” And, that’s where stainless steel comes into play.

Unlike carbon fiber, which costs $150 per kilogram, stainless steel costs $3 per kilogram. That makes the cost of 100-tonne Starship only $300,000 in stainless steel. And rather than hiring specialists at $250 an hour to build it, you can hire a bunch of tank welders for $50 an hour to put it together for you. Well, that’s precisely what they did.

When Elon Musk announced in December 2018 that SpaceX was ditching carbon fiber in exchange for stainless steel, he also revealed that they had already been working on a prototype test article for many weeks.

Even though Starhopper was being built in the open, in a field, on the side of a public road, many people were unaware that what they were making was a spacecraft prototype. That’s because the mental gap between what they were seeing and their image of how “spaceships are meant to be designed” was simply just too big for them to comprehend.

Spaceships are built-in cleanrooms by people in white coats with facemasks and hairnets, not by a hired tank welders in a dirt field on the side of a road! SpaceX really said “screw it” to such stereotypes.

It is believed that Starhopper, including the tank welder, was at least partially built by contractors who normally build water towers. Currently, the welds look somewhat rough as the rings were both created and connected by hand welding.

However, as time goes on, Spacex will undoubtedly acquire welding experience and identify process improvements that will help the Starship seem less shabby. SpaceX believes that building a beautiful rocket is unnecessary as it will cost higher money for very little return.

And, maybe even more crucially, these are early prototypes, so there’s no use in making them look beautiful. So, they are what they are, built as cheaply as possible to perform the task at hand, which is to collect flight data and act as production pathfinders.

This approach contrasts sharply with more traditional aerospace, which spends years perfecting a vehicle’s design before constructing it. The traditional approach usually results in an aesthetic-looking rocket, but it takes a lot longer and costs a lot more money.

Spacex believes in the function over form mantra- their Starships may not be best-looking rockets, but they are extremely cost-efficient.

Thanks for reading till the end. Comment what’s your opinion about this information “Why Starship Looks So Ugly?”.

2 thoughts on “Why Starship Looks So Ugly?”