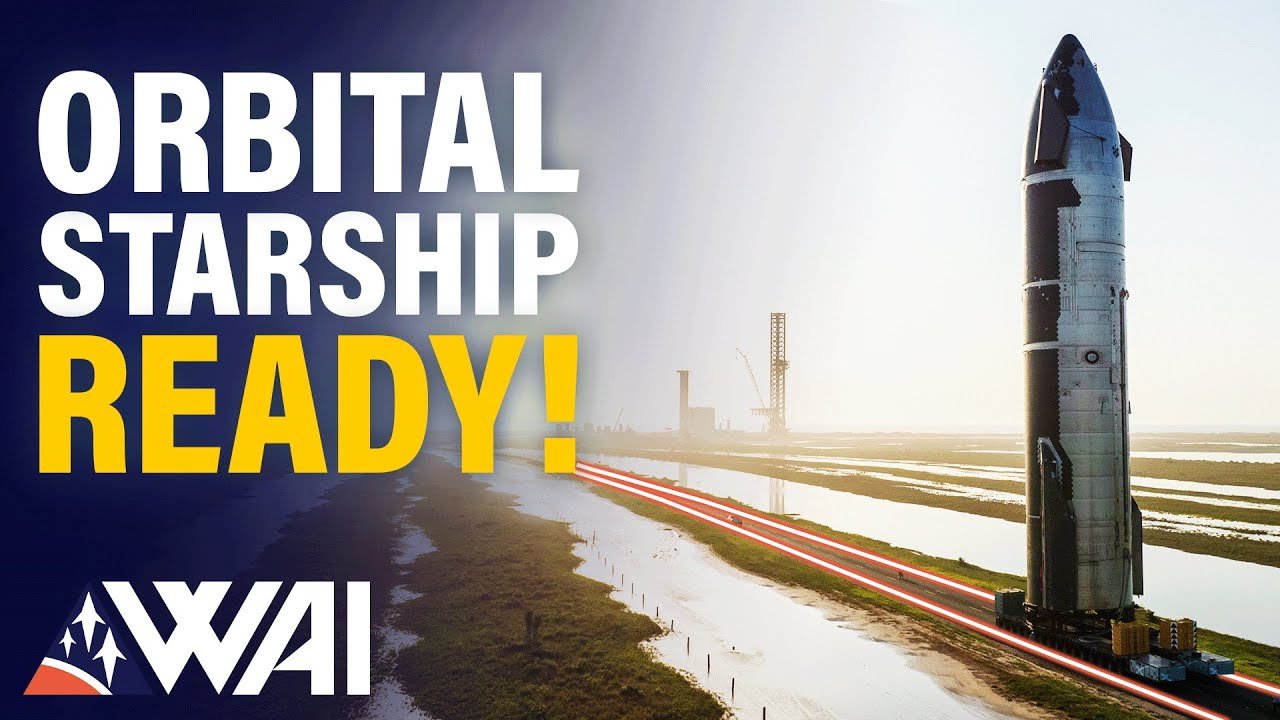 SpaceX Rolling Out The Orbital Starship, Know Why: SpaceX anticipating a positive FAA decision? Preparations for an orbital Starship flight are underway, and was Boeing’s Starliner mission really picture perfect? Let’s find out!

SpaceX getting ready for a hopefully positive FAA decision and Starship flight action, Falcon 9 launching, and a Starliner returning from space. What can we take from this? Let’s dive right in!

With everything new, that is kind of the same, I guess. Building the future of Spaceflight likely was and maybe even still is a scary thing to do for Elon Musk and SpaceX. What you’re looking at here is Ship 24. SpaceX’s latest prototype, Starship.

It is supposed to perform that first flight to space. The most important milestone for SpaceX’s Starship program yet. And on May 26th, SpaceX workers rolled it out from the production site to the launch site on SPMT lifts. The reason? Cryogenic tests.

Then thrust simulator tests on one of the older suborbital test stands from which SpaceX launched the high altitude test flights, and likely after that, static fires. SpaceX has been preparing one of these test stands close to the old suborbital farm for further test activity.

SpaceX is moving fast in preparations for its upcoming orbital flight tests. More and more sources are speaking it out loud. SpaceX expects a favorable FAA decision regarding the ongoing PEA shortly. The latest deadline is May 31st, and SpaceX wants to be prepared as much as possible.

Starlink v2. Around 7 meters long and 1250 kilograms heavy. Starship’s most important payload is grounded unless Starships make it to orbit. I’ve talked about this many times before. This is what will pay for the whole Starship program. And Falcon 9 simply isn’t capable of sending the v2 satellites to space.

First samples of the new satellite hardware are already at Starbase, and so for SpaceX, every day wasted is wasted money. They need to launch payload to space. Starlink v2 is the payload. And there’s official proof for it, too.

Tim Dodd, the Everyday Astronaut, just released another interview with Elon Musk, and he stated what I’ve been speculating for months. The Starlink v2 satellites are much larger and essential for the Starship program.

The satellite hardware is already done, waiting at Starbase to be sent to space, and Musk now needs Starships to fly. That likely is the entire reason why efforts at Cape Canaveral are progressing so fast as well.

To place Starlink Satellites into orbit, you need a good launch trajectory, which is hard to get at Starbase, Texas. At Kennedy Space Centers Pad 39A, though, launches for Starlink will be much easier.

A 6th one is already in the making, and SpaceX only needs 8 to build a second Launch tower at Pad 39A. The reason likely again is Starlink v2. Ship 25 is making equally fast progress! My guess right now is that Ship 24 won’t carry an actual payload.

Maybe, with a big maybe, one Starlink satellite to test deployment, but very likely not a complete payload section full of expensive satellites. To get into business and do full deployments, they need more Starships.

Ship 25 will likely be done next month. It would already be the second orbit-capable Starship ready for a launch. Likely carried up with booster 8, it has a much higher chance of carrying more than just one test payload if Ship 24 performs well.

More and more methane tanker trucks keep arriving at the launch site. SpaceX will need a total of 40-50 of those trucks to fill the orbital fuel farm up for a launch, but these trucks are likely for static fires.

Mega bay construction, another critical puzzle piece for the future of Starbase, Texas, is continuing at a fast pace as well. It’s not even finished yet, but already operational. Booster 8 has been inside for some time now, and SpaceX uses the Mega Bay as if it was already finished. No time to waste here.

Hopefully, in preparation for a first full static fire, engine installation has been going on for a few days now. It is almost impossible to get an engine section picture of booster 8 inside the mega bay, so we do not know precisely how many engines SpaceX has installed so far, but there shouldn’t be many slots left.

And SpaceX is already utilizing the gantry cranes installed inside the mega bay, and, as usual, there are more Easter eggs to be found. Let me introduce you to Sir Gantry, the crane! This giant mustache appeared on one of the gantry cranes. The one holding Booster 8. It’s essential to have fun at work, right?

Since Ship 24 is now at the launch site, let’s have a lock on when we can expect some test activity, shall we? After all, that’s the most exciting part! It seems like SpaceX is right now saving every possible day for road closures. Some of them get canceled again, but the intent is pretty straightforward, and it perfectly fits the theory of SpaceX expecting a positive outcome from the FAA PEA decision.

Ship 24 needs to perform everything there is. Booster 7 still needs to do static fires. We’re rapidly going into a hot phase again, and there’s a lot to look forward to!

On we go with Transporter 5, SpaceX’s latest rideshare mission! Lifting off from Space Launch Complex 40 at Cape Canaveral on May 25th, it was yet another stunning performance of a Falcon 9 rocket.

The spectacle is even more impressive though SpaceX’s live cameras if you can’t make it in person. 59 spacecrafts stuffed into a full payload fairing. Cubesats, microsats, non-deploying payloads, and even orbital transfer vehicles intended to move Payload to their specific orbits after deployment.

Initially slated for launch out of Vandenberg Airforce Station on the west coast of the United States, the booster took a southern trajectory, nicely visible along the coast of Florida. The unusual trajectory was the result of the intended orbit. Sun-synchronous.

A Sun-synchronous, or SSO orbit, also called a heliosynchronous orbit, is a nearly polar orbit around a planet. The satellite passes over any given point of the planet’s surface at the same local mean solar time.

More technically, it is an orbit arranged so that it precesses through one complete revolution each year, so it always maintains the same relationship with the Sun. It doesn’t change the relationship. 1061 is a pretty historic booster. Another fact you can only state about SpaceX rockets.

It was used for Crew 1 and 2, and besides its other flights, it has already pushed CRS 23 and Cargo Dragon 2 into space. So, by now, it was responsible for pushing three ISS flights into orbit. SpaceX provided beautiful landing footage. Dead center touch down. That’s SpaceX.

At T+ 59 Minutes, the deployment sequence started. A highlight of every Transporter mission, as 49 spacecraft got deployed over the cause of the flight. Many of them are visible on camera in a 15-minute ballet with the upper stage as the leading actor.

Mission 157 accomplished. Falcon 9 is the main reason why we can watch a rocket launch almost every week. 32 launches are planned for 2022. SpaceX flew 31 in 2021. Three boosters with a total of 12 launches each by now. World Records all over the place.

And with Starships hopefully soon launching out of Cape Canaveral, we might be heading into a future where a year worth of launches from today is done in one month.

Next up, we have Boeings Starliner. It has officially concluded Orbital flight test 2, and we’re now doing the big summary. Orbital Flight Test 2. The mission wouldn’t have been flown if everything had gone smoothly. But in Spaceflight, not everything goes smoothly every time.

The original orbital flight test 1 was a setback for Boeing Space. It was not exactly a picture-perfect mission, but plagued by many problems and poised not to reach the ISS. And it set back NASA’s commercial crew program even though SpaceX is already ferrying Astronauts between Cape Canaveral and the ISS regularly.

The commercial Crew program was designed for two spacecrafts. And two are needed. Redundancy is the key here. On May 19th, ULA’s Atlas V rocket pushed the second try up and towards the ISS. OFT2.

Entirely paid for by Boeing as a sign of good faith. Altas V performed flawlessly, but there were a few minor problems with Starliner again. For example, two thrusters on Starliner’s service module failed during the orbital insertion burn, about 30 minutes after launch.

And as Starliner approached the space station on Friday, May 20th, an additional two thrusters needed to be shut down, this time in the capsule’s reaction control system. It didn’t prevent Starliner OFT2 from docking with the ISS, but it shows that the vehicle isn’t without problems.

The thrusters on the already replaced service module and those on the capsule itself need more work. As a fun fact, Starliner carried a well-known guest towards the ISS. Kerman visited the Station.

After a 5 day’s stay at the International Space Station, Starliner OFT 2 undocked and started its return trip towards the white sands missile range in New Mexico. And there were no visible or reported issues throughout the landing. Perfect chute deployment and touch down.

Starliner is expected to be at Cape Canaveral for post-launch inspections, and NASA and Boeing called the mission a success at the press briefing on May 25th. And right now, it looks like the next test will indeed be crewed.

NASA and Boeing will have to work through all the collected data, but that’s the verdict right now. Boeing fully expects the mission to be enough to proceed. I’ll, of course, keep you updated as soon as there’s new information!

Spacex is just another example of how modernization and tech disruption leads to huge societal advancements. It extends across all facets of our society and has revolutionized every industry.

1 thought on “SpaceX Rolling Out The Orbital Starship, Know Why”