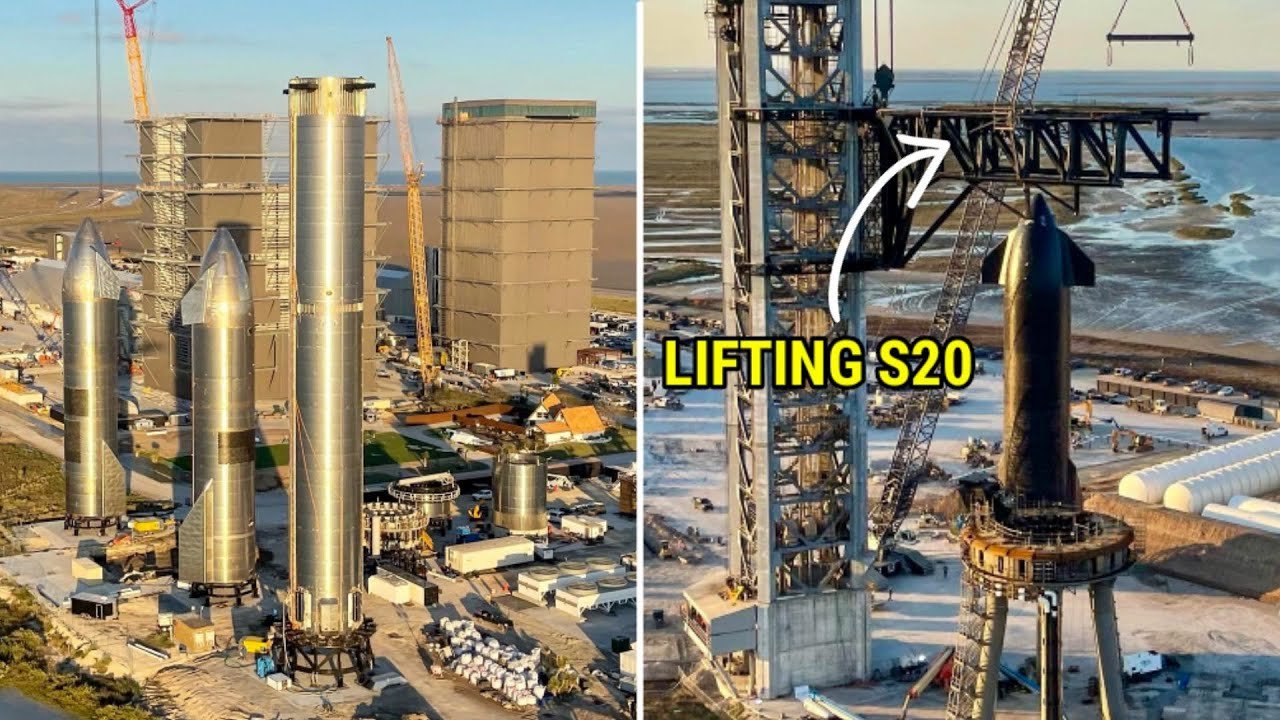 Additionally, as an apparent centerpiece for the event and update, Musk says that SpaceX will perform the second-ever “full-stack” fit test with a Starship upper stage and Super Heavy booster.

Starship S20 and Super Heavy booster B4 were stacked for the first time in early August 2021, when both stages were still weeks or even months away from some degree of completion. Only months later did Starship S20 kick off a multi-month period of qualification tests, eventually becoming the first Starship prototype to successfully test a full six Raptor engines at once.

Super Heavy B4, on the other hand, had an even more painful time for unknown reasons and only graduated to basic cryogenic proof testing in mid-December – more than four months later.

While the booster has had a full 29 Raptor 1 engines installed for months, the booster has yet to perform or attempt a single static fire of any number of those engines and hasn’t even managed a basic wet dress rehearsal with real liquid oxygen and methane propellant.

Eventually, SpaceX did perform a handful of Booster 4 Raptor ignition tests, but those were almost more of a test of the launch pad than Super Heavy itself. The slow and minimal progress SpaceX has made testing Super Heavy B4 may actually be because of issues with the orbital launch pad’s tank farm design.

To this day, while the oxygen and nitrogen half of the farm is already storing thousands of tons of propellant and coolant, the fuel side of the same farm has yet to be filled with any methane. That makes thoroughly testing a Super Heavy booster much harder, though there are some obvious workarounds SpaceX could have made if it had really wanted to start proof testing Booster 4 as soon as possible.

In fact, it’s no longer clear if Ship 20 and Booster 4 will actually get to fulfill their original goal of supporting Starship’s first orbital (velocity) test flight. Nonetheless, they are still two giant, nearly completed stages that together form a full Starship ‘stack.’

The rocket ship is under development at Boca Chica Beach, Texas, where the company established its Starbase rocket factory and launch site. Starship is a two-stage launch vehicle consisting of a spacecraft and an enormous Super Heavy rocket that propels it to orbit.

The company aims to perform the first orbital Starship flight test this year after the U.S. Federal Aviation Administration (FAA) completes an environmental assessment of the Boca Chica launch site. The FAA expects to complete the review by February 28.

It will be the first time SpaceX tests the complete launch system and launch tower. Heading into 2022, SpaceX appears to be more focused on testing a somewhat extraneous part of the first orbital Starship launch site – “chopstick” arms installed on the launch tower.

The launch tower is equipped with giant robotic arms designed to stack the 160-foot-tall Starship atop the 230-foot-tall Super Heavy rocket. SpaceX has only stacked Starship atop Super Heavy once, Musk said it was a “dream come true” to see the vehicle he envisioned in its full form in August 2021.

The vehicle was stacked with giant cranes and not the “Mechazilla” launch tower. We will soon see the robotic arms in action for the first time when it stacks the vehicle before the presentation. Musk said Starship will be fully-stacked when SpaceX live streams his update from Boca Chica Village.

In 2019 Musk gave his presentation on a stage standing in front of a beautiful Starship prototype called ‘MK1’ – the first make of the spacecraft. SpaceX’s current Starship ‘launch tower’ design centers around the need for three giant swinging arms – one to fuel and power Starship and the other two to lift, stack, and – maybe one day – catch Super Heavy boosters and ships.

In theory, replacing that design with a complex, building-sized umbilical arm might ultimately improve Starship’s nominal payload to orbit by a few percent. Additionally, using the even more complex “chopsticks” – a pair of giant arms – to lift and stack Super Heavy and Starship may actually be a smart design, as it could theoretically free SpaceX from the painful operational constraints imposed by large cranes.

By all appearances, that’s exactly what SpaceX plans to test next week. Starship S20 has already been moved adjacent to the launch tower and Super Heavy B4 has been attached to a crane (somewhat ironically) in preparation for its own move to the tower.

For the first time, SpaceX might use the tower arms to lift Super Heavy onto the orbital launch mount, stabilize the booster, and then lift and stack Starship on top of it – all without a crane, in theory. Of course, insofar as SpaceX performed the first full-stack fit test with a crane, the tower’s lift/catch arms only really become irreplaceable once waiting a few days for safe lift conditions becomes a bottleneck for Starship launch operations.

Nonetheless, a successful stacking operation with those arms would be an impressive technical feat and demonstrate one of the things needed for all-weather Starship launch operations, even if it won’t leave SpaceX any closer to orbital test flights than it was before.

Chief Engineer Elon Musk has provided periodic updates of SpaceX’s goal to make life multi-planetary since 2016. He envisions manufacturing a reusable interplanetary transport system to enable hundreds of humans to build the first city on Mars.

Throughout the years, Musk gave the launch system different names and presented different design iterations until he officially unveiled a real-life prototype of Starship in South Texas during the company’s last 2019 update presentation.

Since SpaceX engineers have manufactured and launched multiple stainless-steel prototypes of Starship. Every test launch provided engineers with insight to improve the vehicle and allowed Musk to enhance the vehicles’ design.

SpaceX demonstrated its engineering talent when it launched and landed the methane-fueled Starship with precision in May last year. NASA even awarded SpaceX a contract to develop a lunar-optimized Starship Human Landing System (HLS) to land astronauts on the Moon by 2025 as part of the Artemis program.

SpaceX is expected to significantly advance the spacecraft’s development this year to meet the agency’s goal of returning America to the lunar surface. The company has never launched a methane-fueled rocket as powerful as Super Heavy, which is set to become the world’s most powerful launch vehicle.

It will be interesting to learn how much the Starship’s design and technical systems have changed since the last update and what is the next phase of the launch system’s development. We will also likely find out SpaceX’s official flight profile for the upcoming orbital flight test.

According to an FAA filing, SpaceX submitted last year, Starship could propel to orbit from South Texas and land off the coast of Kauai, Hawaii. We will soon find out SpaceX’s exact plans for this ambitious launch! The company has not released any additional information about the upcoming presentation.

Thanks for reading till the end. Comment what’s your opinion about this information “SpaceX Starship PRESENTATION Is FINALLY Here?“.