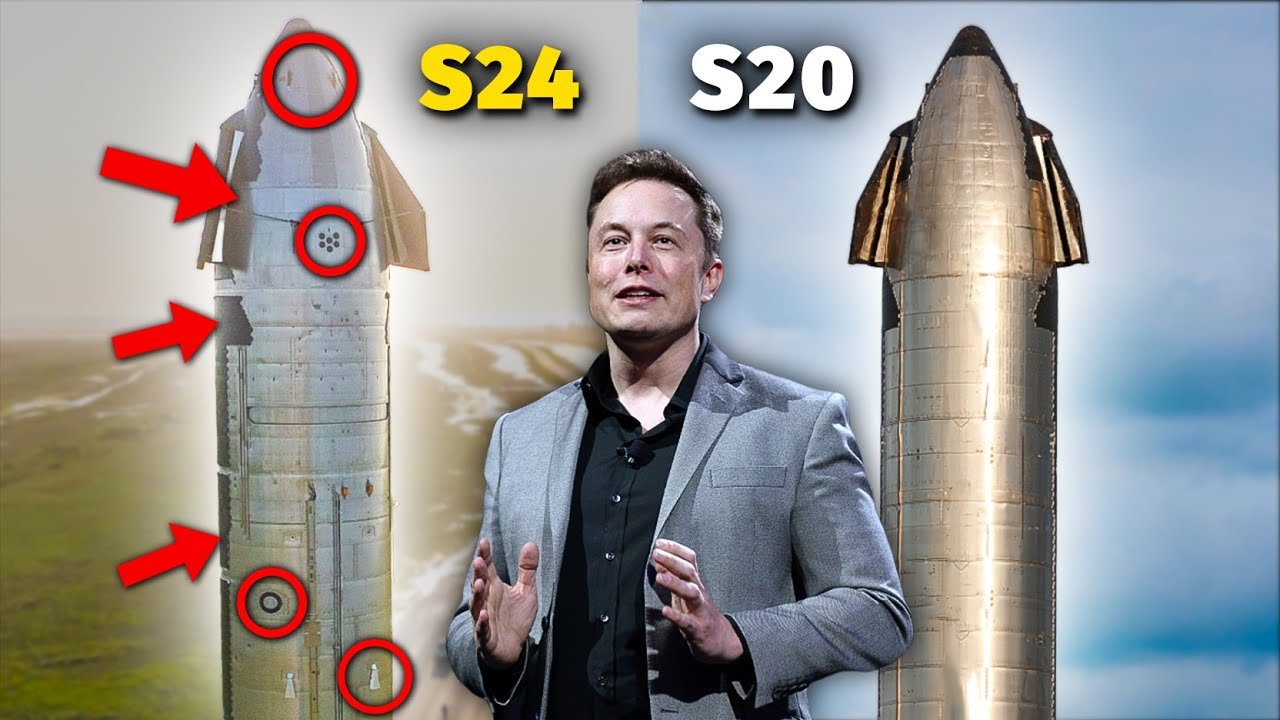 SpaceX Great Improvements From Starship S20 to S24: Now that the FAA has raised the green flag for SpaceX to peacefully launch the Starship into space, the company recently discovered that SN20 and B4 were getting deteriorated and outdated.

It’s sad to say that the SN20 and the B4 have already been manufactured and stored in their respective bays for nine months. So, they cannot be tested and prepared for an orbital test flight.

Hence SpaceX decides to deviate their concentration from the SN20 and B4 and take the bold step of producing another brand-new prototype, which is the ship 24 or SN24 and booster 7 or B7. And this particular prototype can be described as a variety of spice in space.

The FAA’s delay in granting SpaceX the launching permit was a disaster SpaceX has faced since the company was established and had pushed SpaceX into damages that cost millions of dollars. SpaceX has been hard at work developing many prototypes of starships, most importantly the ship 20, also known as the SN20, and the booster 4, also known as the B4.

These rockets were supposed to be put together so that the SN20 would be on top, while the ship and B4 would be on the bottom, to create a massive rocket that would be 394 feet tall in height when it is fully assembled.

However, the nightmare that SpaceX was up against was that the FAA had not yet approved the company to test any starships at starbase Boca chica in Texas. As a result, it was impossible to conduct tests on these prototypes then.

But nothing is lost yet, Elon Musk – the man who makes what the masses describe as impossible possible, and SpaceX have manufactured another giant pair of Starship called the SN24 and B7 – which could make anyone say WOW at first sight.

SpaceX had to design the X logo on the nose cone of the ship24 to reflect its luxurious structure and as a sign to silently pronounce the company’s legacy in space through every ship 24 that will be transported to space.

After much trial and error, the heat-shield tiles were successfully fitted on Starship SN24, according to the most recent information from Boca Chica.

A much smaller internal pipe that was probably transporting high-pressure gas also collapsed during one of Ship 24’s initial tests, causing damage to the heat shield tiles that were already fixed and other nearby plumbing. So manufacturing the S24 was a cumbersome task but not worse than the SN20.

Both issues were novel failure scenarios for the Starship program. They served as a reminder that the hardware is still new and SpaceX is still learning. It took SpaceX engineers a few days to resolve all faults on Sn24.

After all faults were rectified, for the fact that B7 and S24 passed the second testing without apparent trouble shows that SpaceX engineers can also act faster on any intending new issues, in case there be any.

SpaceX installed 33 Raptor engines and related heat shielding on Booster 7 for around six weeks, while Ship 24’s installation of six Raptors and completion of a few other tasks took about four weeks.

The intensive testing and several six-Raptor static fires that Starship S20 endured in 2021 will be very helpful to Starship S24’s test campaign. Except for a single three-engine static fire accomplished by an old rocket prototype last year, SpaceX’s wet dress rehearsal and static fire test campaign for the Super Heavy B7 will be entirely brand-new.

Later in July, SpaceX may make an effort to do a static burn on Booster 7 for the very first time. It is currently unclear whether or not the company will try to begin Ship 24’s next phase of testing during the static fire test being performed on Super Heavy B7.

Although it is highly unlikely, SpaceX does what it takes to do simultaneous tests of both Booster 7 and Ship 24. B7 and S24 returned to SpaceX’s production facilities for Raptor installation and final touches following cryogenic proof and thrust simulation testing.

Elon Musk has already been asked on Twitter about the first orbital flight test as one of the major challenges in testing the Starship. He answered, “Starship will be ready to fly by July 2022. This implies that in 2022, there will be between 4 and 6 Starship orbital missions.

If the test flight becomes successful, it will give the company a hand full of knowledge to prepare more Starships and for future missions to the Moon, Mars, and beyond. After attaching a massive white box to a crane, SpaceX moved the box into place so that it would connect with Ship 24’s bay door.

The test supported the idea that the box’s primary function was to enhance payload installation, perhaps the most pressing challenge given by SpaceX’s one-of-a-kind payload bay design.

The solution that appears to be achieved by SpaceX includes employing the deployment process in reverse, with the white box delivering Starlink Gen2 satellites through the ‘slot’ and the dispenser grabbing and pulling each pair of satellites up into the bay.

The first attempt that SpaceX has made at designing a payload bay for a Starship has been compared to a gigantic Pez dispenser, which is not a completely false description. Satellites will be kept on a rectangular rack that is believed to function similarly to an elevator.

This feature will be unique to Starlink deployment in space. The stack of satellites will continue to feed downwards like bullets in a magazine until the entire set is fully deployed as an unknown mechanism pushes two satellites at a time through the bay door that resembles a slot on the Starship.

A new animation shown during SpaceX’s All-Hands Meeting before being released on Twitter by Musk reveals that SpaceX intends to use Starship to deploy its next-generation Starlink satellites. Musk tweeted the video on Twitter after it was shown during the meeting.

The animation shows a Starship in orbit above the earth with Starlink satellites packed inside, similar to how candies are arranged in a Pez dispenser. Pez is one of the most well-known candies, and since it comes in a convenient pocket-sized dispenser and a wide variety of lovable types.

It seems that Elon Musk has been looking to Pez as a source of creativity for manufacturing his SN24 Starship rocket for deploying the Starlink satellite into orbit. While still in their folded-flat shape, the satellites are evacuated from the rocket through a small slot on the side of the Starship.

Starlink is a constellation of more than 2,000 satellites in low Earth orbit; this is one of the reasons why the Starship requires a fast-dispensing mechanism to meet the launch time. Thanks to his grace, SpaceX has already devised a solution to that problem by implementing an automated technology beyond the scope of what we know to be possible in our lifetime.

The satellites are currently launched from SpaceX’s Falcon 9 rockets. However, Elon Musk recently explained how the next generation of satellites, referred to as Starlink V2.0, will rely on Ship24 for deployment.

This means that deploying the satellites will be much quicker than we could ever imagine; it will be more akin to throwing wheels into the air. If Ship 24 is successful in its upcoming testing, it will likely have many Starlink V2/Gen2 satellites carried into the bay of the vessel.

It will also have to perform at least one little wet dress rehearsal, which simulates every aspect of a launch except for the ignition of the engines, and one six-engine static fire before it can be given permission to take off.

However, it is far more likely that Ship 24 will have to perform several tests, including testing the mechanism that automatically deploys the satellite in space to examine if it will work as intended. SpaceX’s Starship vehicle will operate like a gigantic flying Pez dispenser on some missions if all goes according to plan.

A fairly small slot and an active or passive deployment mechanism are all required for a starship to function, instead of a big cargo bay like an alligator. First, satellites would be placed into the slot one at a time and then somehow raised inside the bay on the rail-like structure SpaceX erected.

Suppose this deployment mechanism successfully works on the Starship. In that case, the S24 rocket will break the world’s record as the only rocket designed to automatically deploy satellites in space.

When it finally comes on board, and all required mechanisms operate as intended, Starship will be the biggest and most powerful space transportation system ever built, which is basically manufactured to take people and cargo to the moon and Mars and to perform a variety of other tasks — including deploying the next-gen version of its Starlink internet satellites.

Do you believe that the ship24 will be able to successfully deploy all 2,000 satellites in orbit as it has been designed to, and do you think such technology is possible? And talking about this, do you know “Starship’s hardest problem” that Elon Musk Never Told Us?

Thanks for reading till the end. Comment what’s your opinion about this information “SpaceX Great Improvements From Starship S20 to S24“.